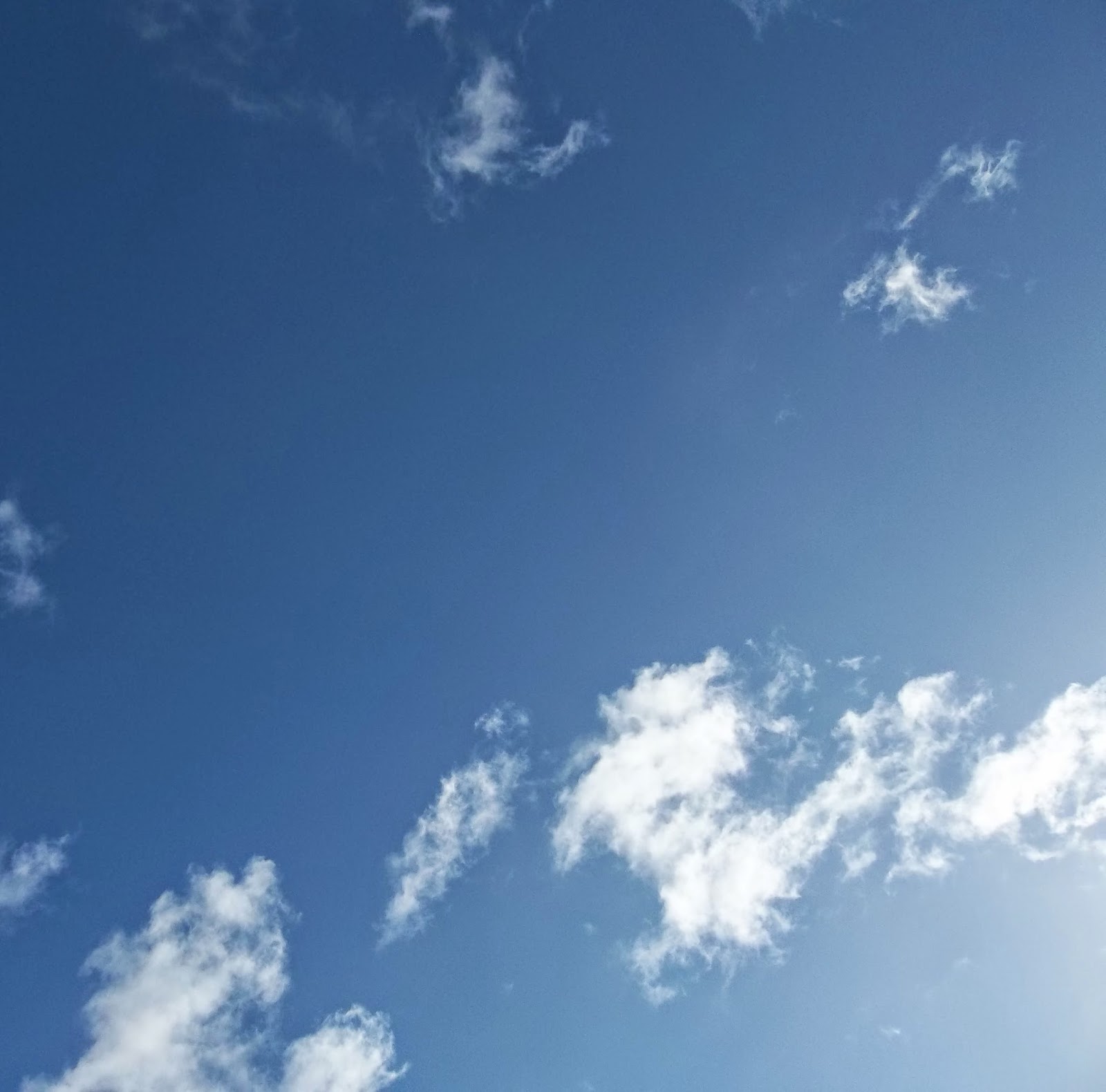 Yes, Spring is here at last, although from the weather today, it is a bit difficult to tell.  Gales, hail, grey skies, but then a flash of blue to lift the spirits. 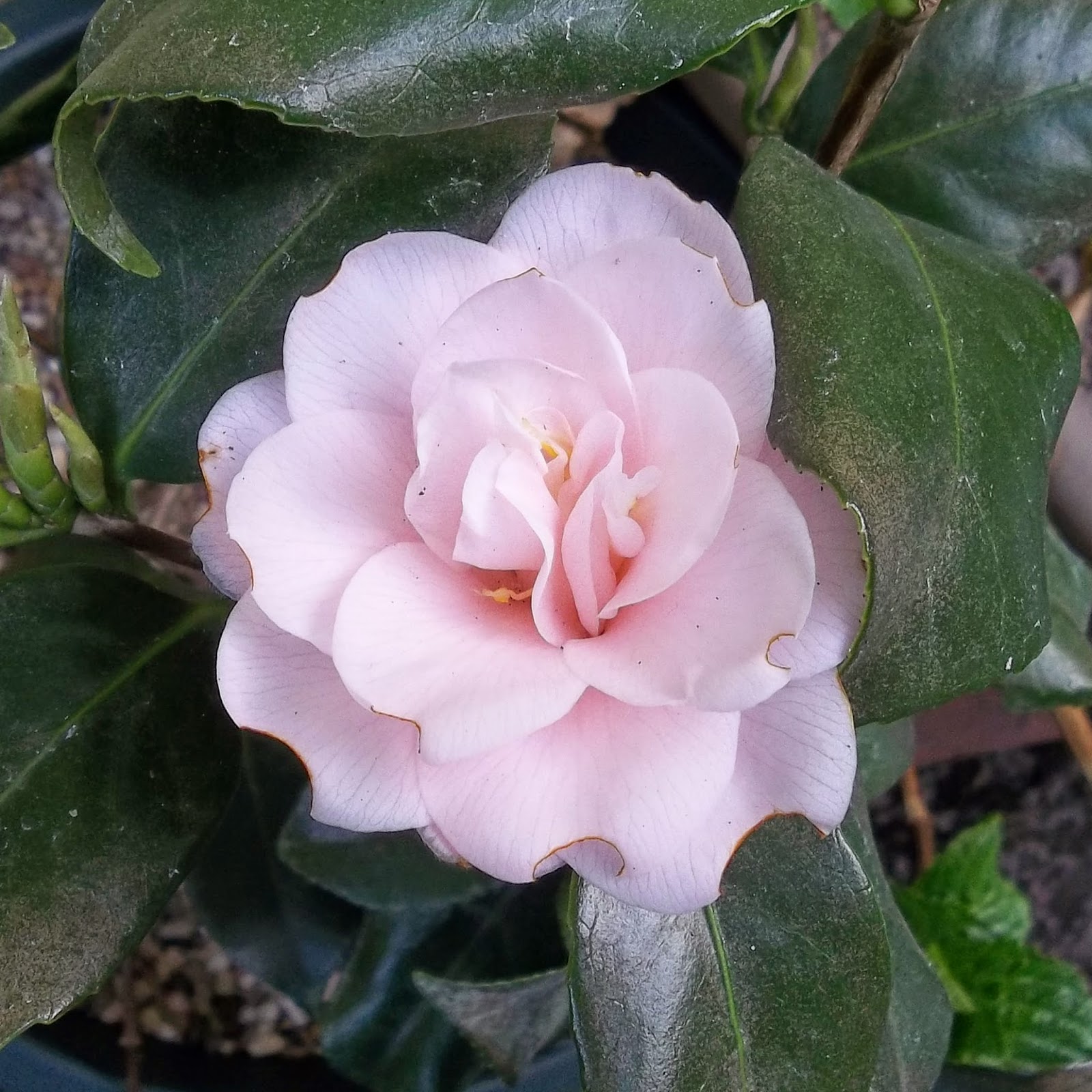 I bought this little camellia (no name, but it is a japonica variety) on a recent trip to The Range (the kind of shop which sells lots of different things and you never quite know what you may find).  We went to buy plastic storage boxes for our ever increasing stash of gemstones/beads and of course, came out with other bits and pieces too.  There is a good craft section there and we always buy something when we visit! 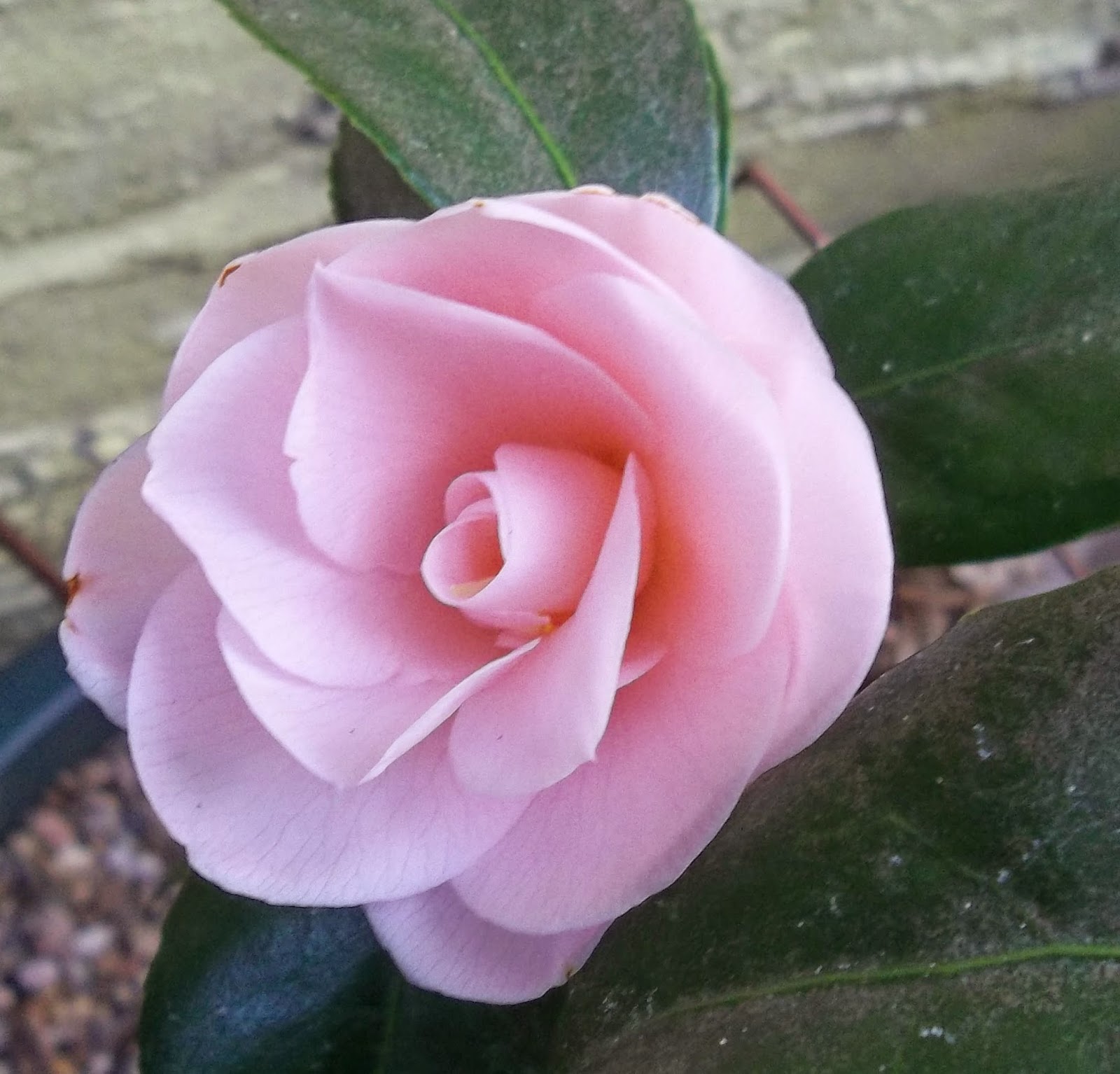 I couldn't resist the camellia with its fat flower buds. 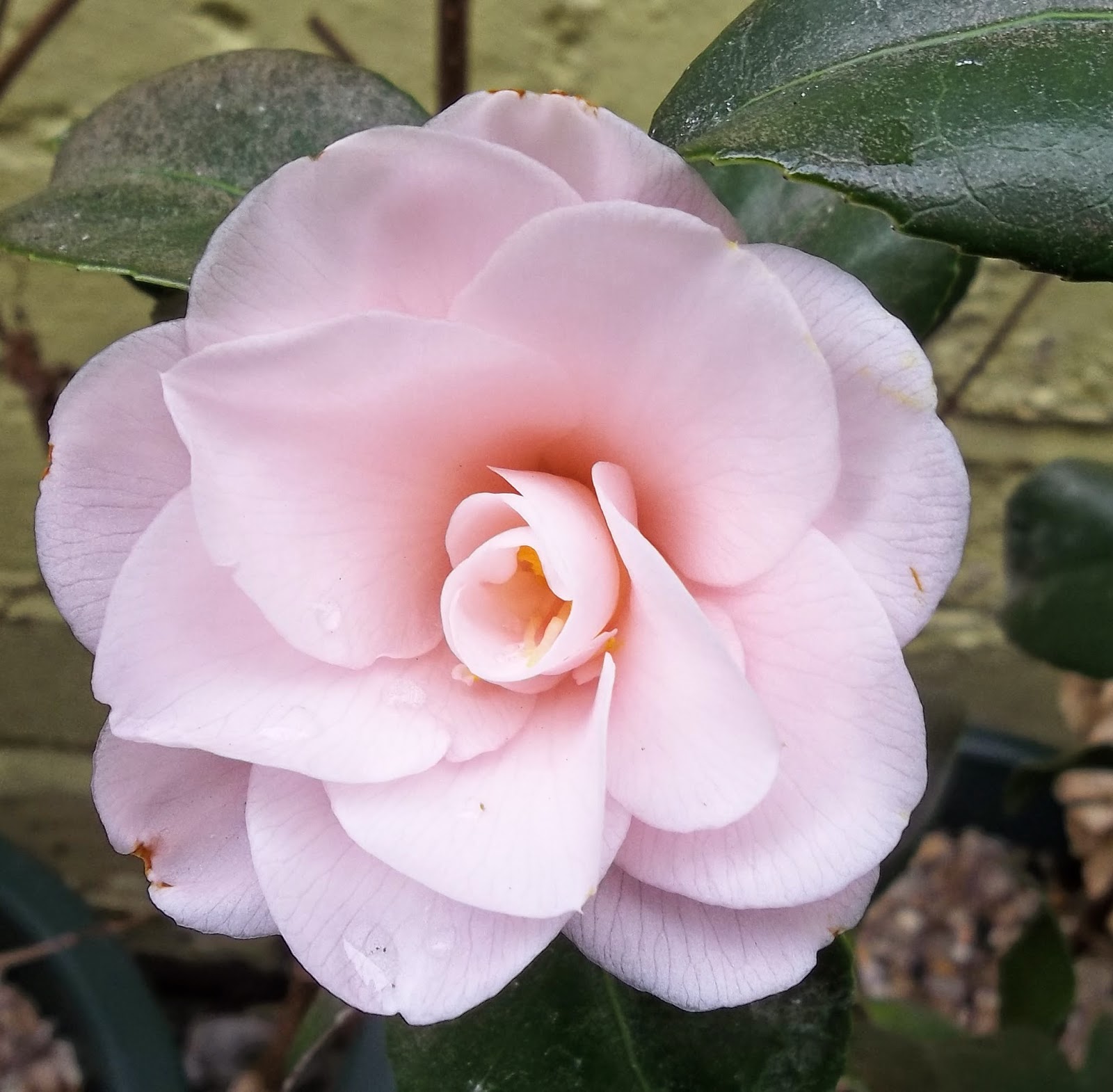 Now they have opened, I am really pleased I bought it - the flowers look a bit like roses. 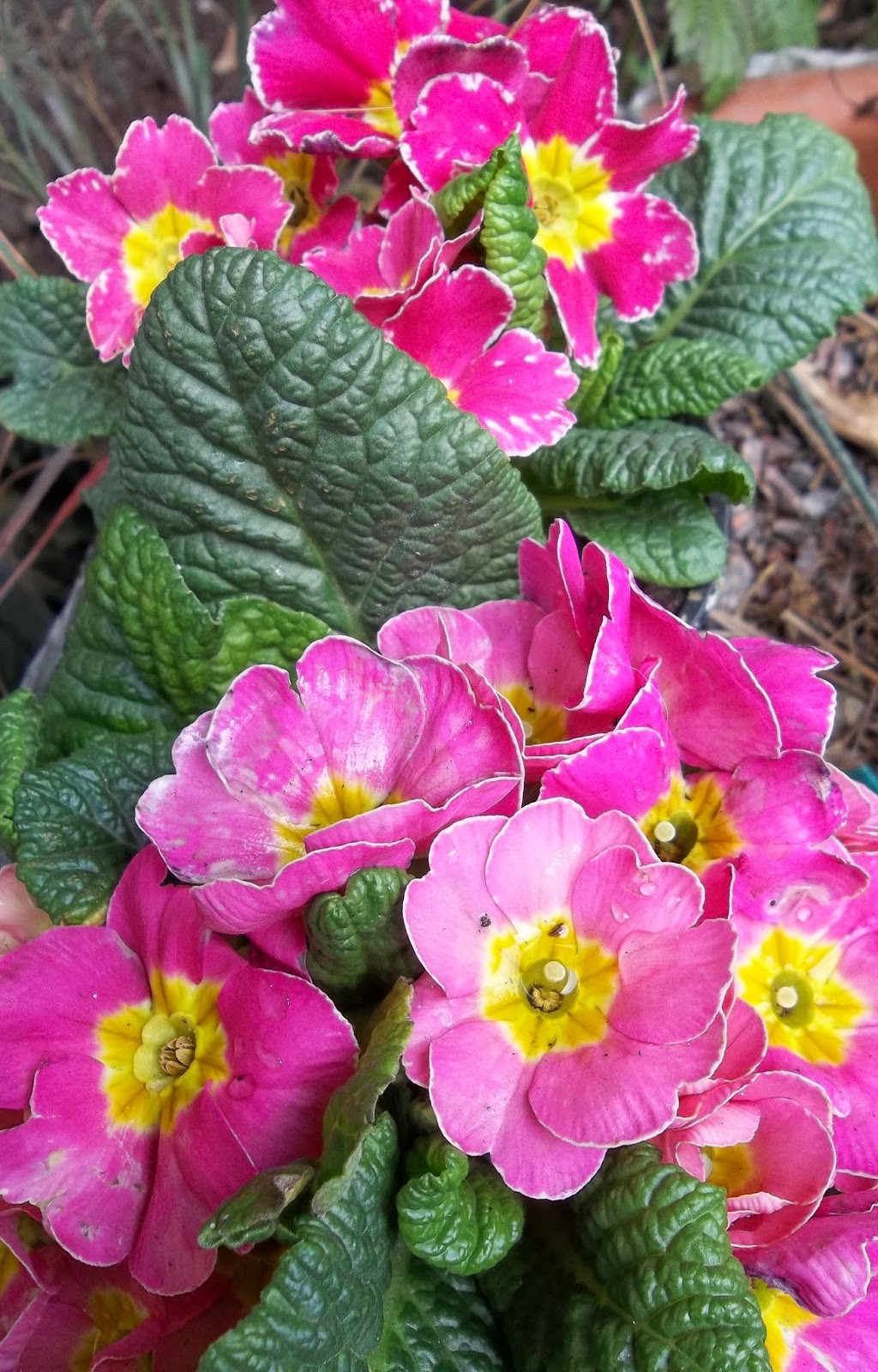 These two vibrant pink primulas were also purchased - the flowers look a bit weatherbeaten, but they were only 74p each, so how could I resist?  I'll divide them in a while and then they'll go in the garden. 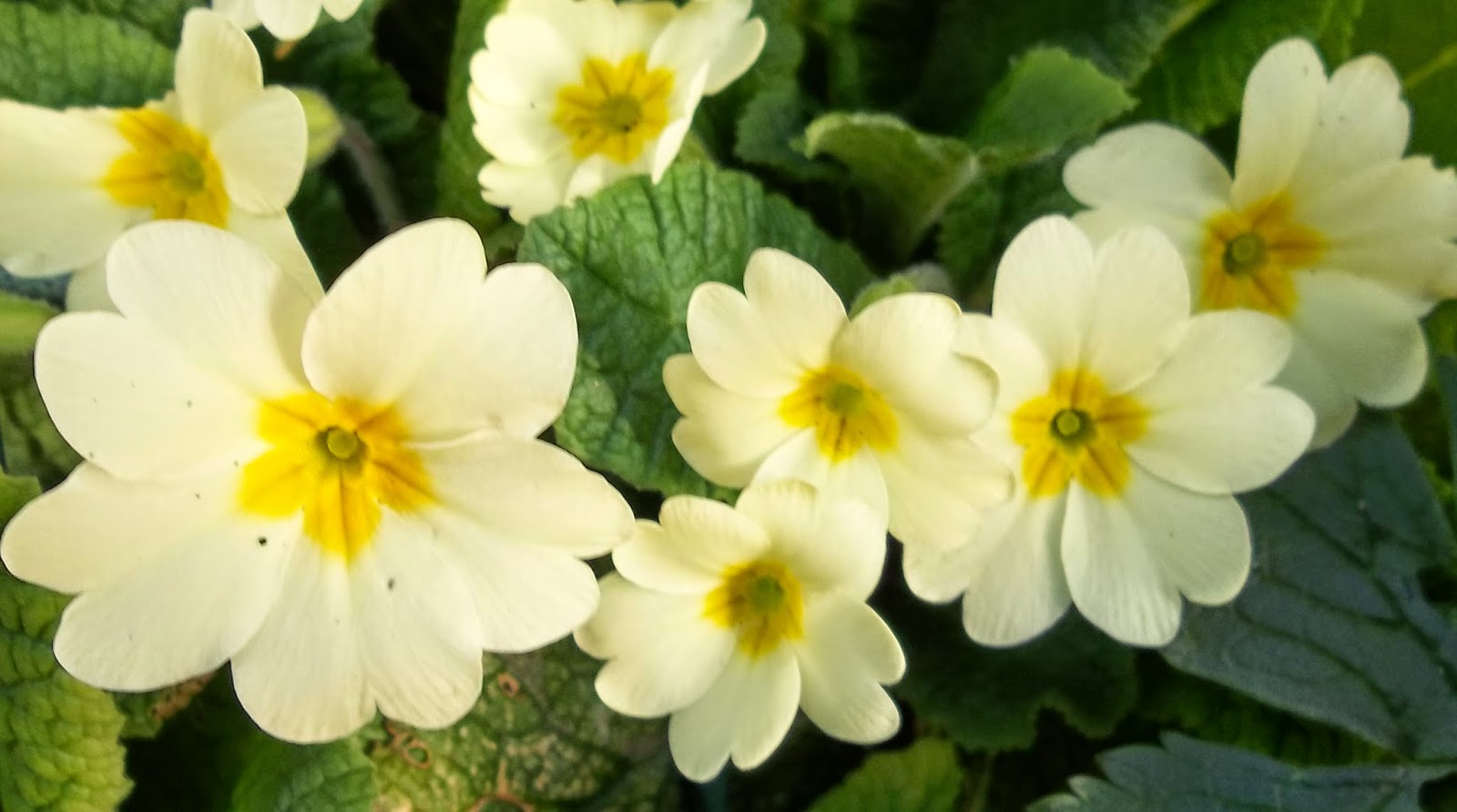 Of course, I don't think old fashioned and perfect primroses can be bettered as the harbingers of Spring. Beautiful sunny colours.

The last of my crocuses to flower are Jeanne D'Arc, with a delicate pastel purple stem.  Now there are magnolias to come and then tulips - I'm really looking forward to seeing them.
Posted by Ellie Foster at 12:47 4 comments: 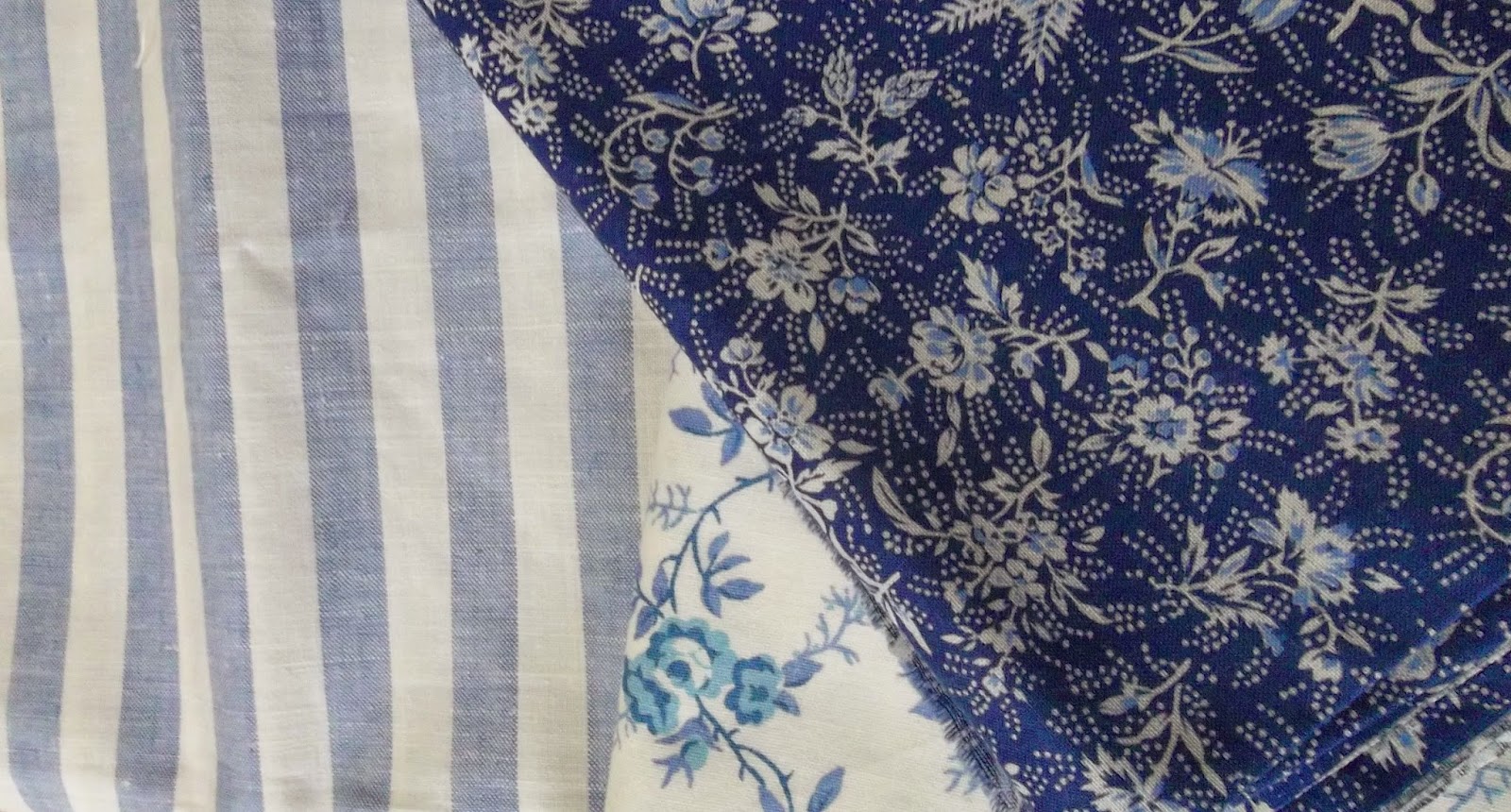 After we went to the Vintage fair at Kelham Hall, we called in at Newark Antiques Centre, a former congregational church, but now, full to the brim with antiques and collectables.  I wandered round and was drawn to some blue and white material, which I bought (of course).  I was also drawn to a blue and white muffin dish, consisting of a plate and lid in the deepest cobalt blue with white blossom on it.  I stood and looked at it for a while and then asked to look at it in greater detail.  In retrospect, this was a mistake, because once I held it, I knew I would like to buy it.  Anyway, I checked it over and looked for a mark - Wood and Sons, Prunus.  I then talked myself right out of buying it!  What would we do with it, where would we put it?  I reluctantly put it back and talked to the lady at the counter who said she would have bought it.  However, I bought the material and left the dish there.
Of course, the internet helped a lot with finding out about the pattern. It was probably made between 1890 and 1920, by Wood and Sons and the designer was Frederick Rhead.  I discovered that it was a pattern mainly used for vases, dressing table items and not much was made as dinner services.  My original thought was that I could look out for it and buy some plates to actually use.
Well, you know what it is like.  I thought about it and thought about it and eventually, Chris said we could go back and I could get it (I think he just wanted me to stop going on about it!).  I rang up and reserved it and we went back the next day.  (I'm sure you knew that is what would happen, didn't you?!) 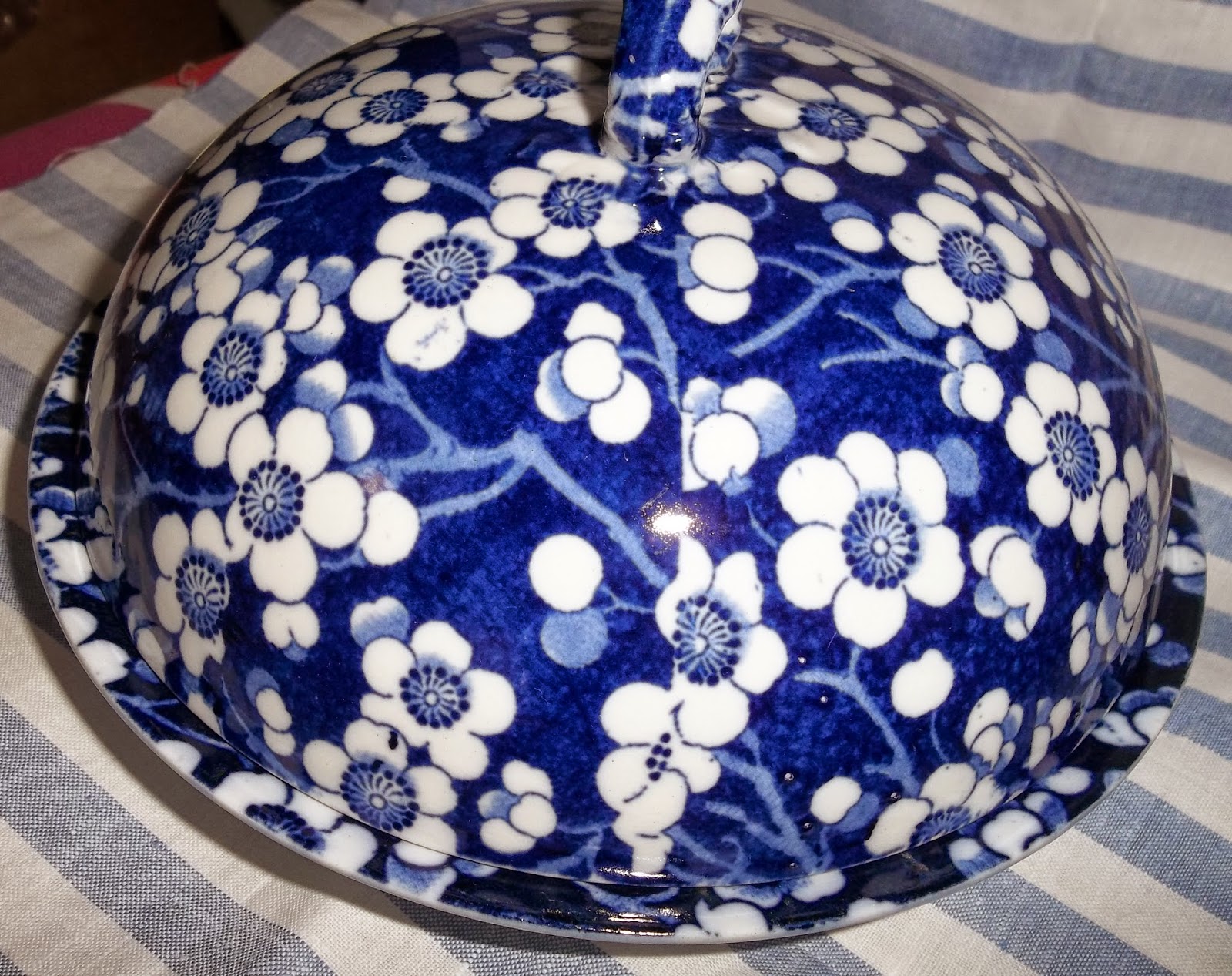 Here it is - I just love it and it make me smile when I go past it.  At the moment, it is on the table with the seasonal tree, but whether that will be its home, I'm not sure. 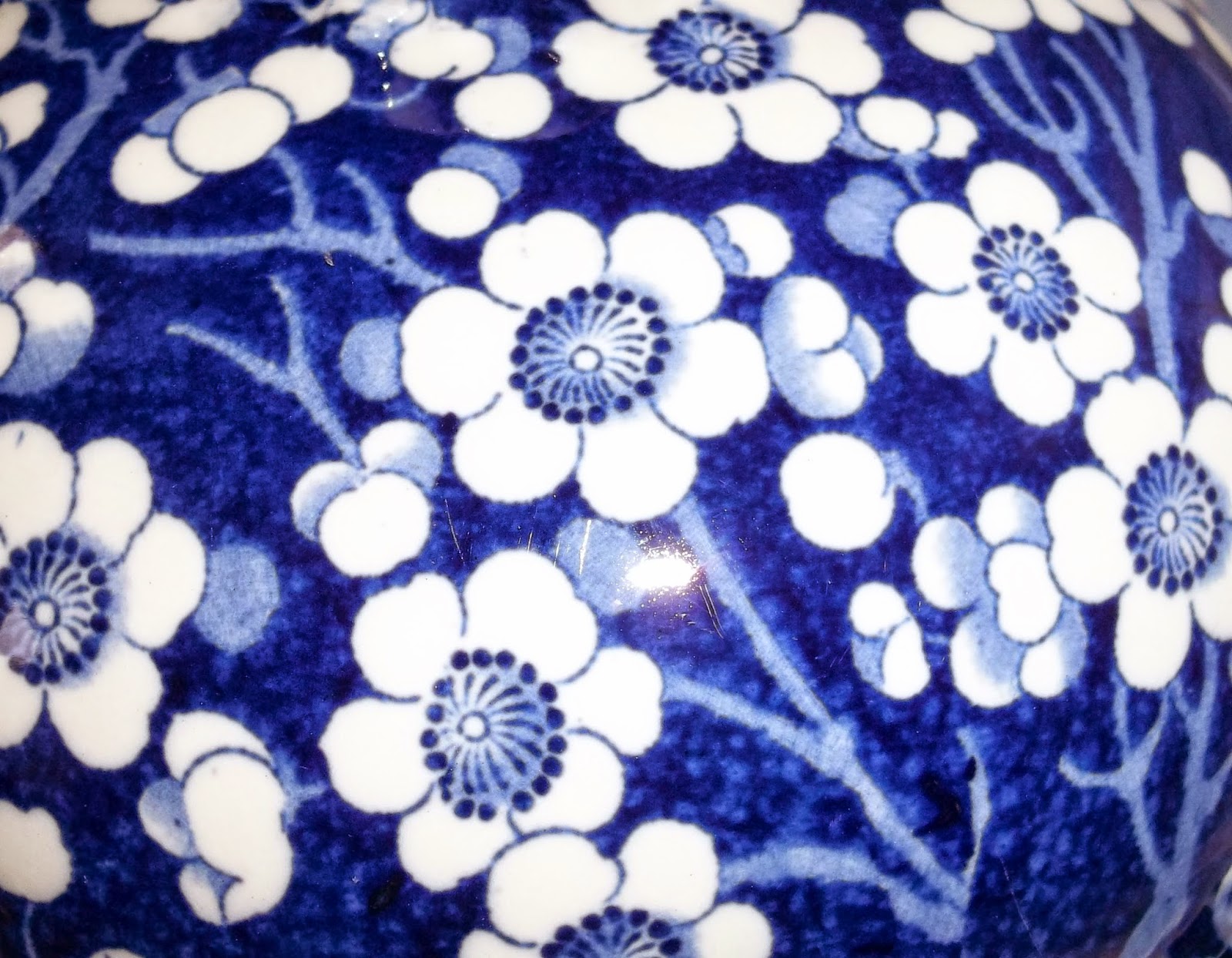 I'm now wondering whether I can make a polymer clay flower cane based on this design...now there's yet another challenge!
Posted by Ellie Foster at 10:31 12 comments: 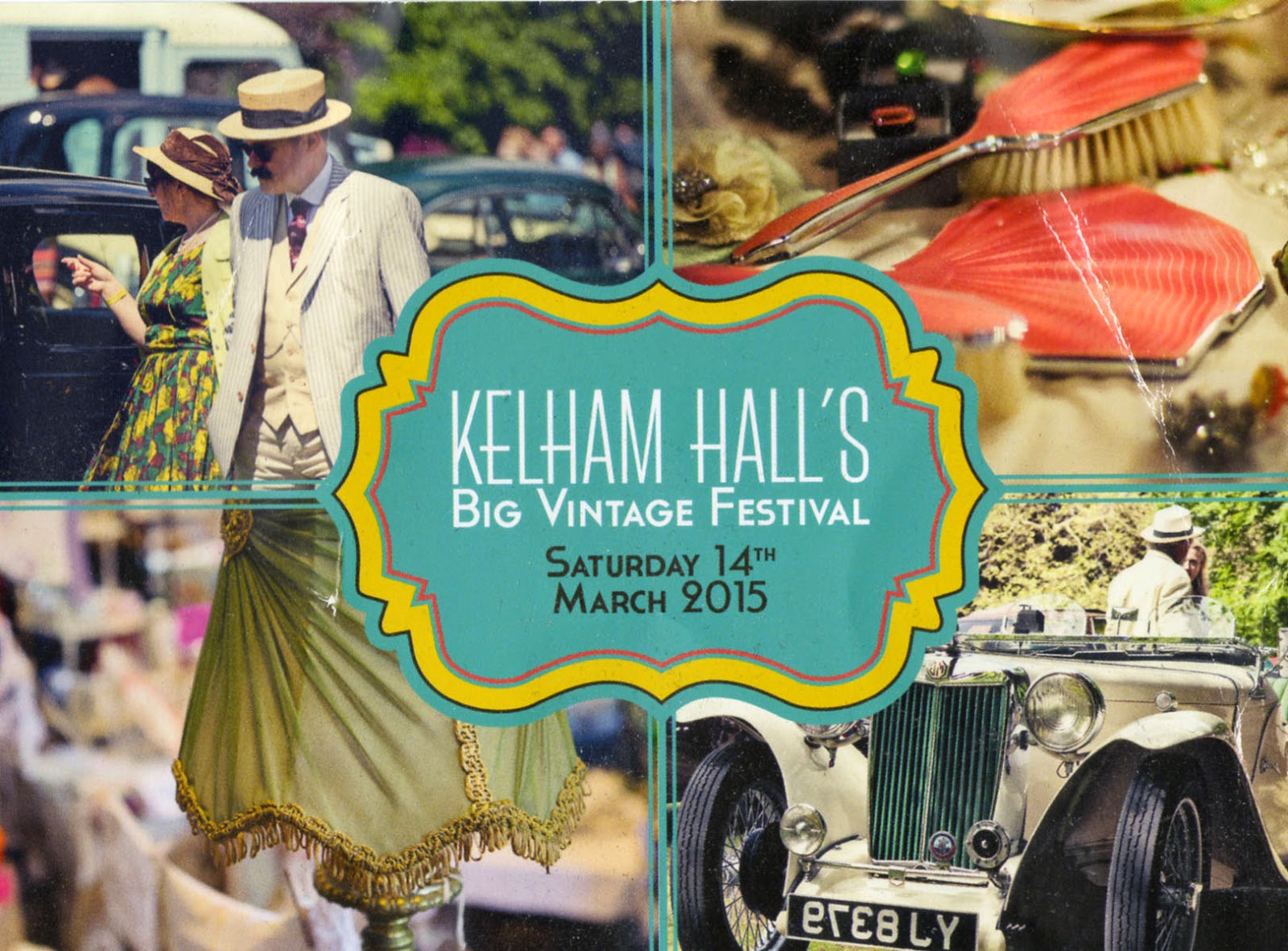 We headed to Kelham Hall last Saturday, to go to the Big Vintage festival.  We were looking forward to it, but at the same time, weren't quite sure what to expect. 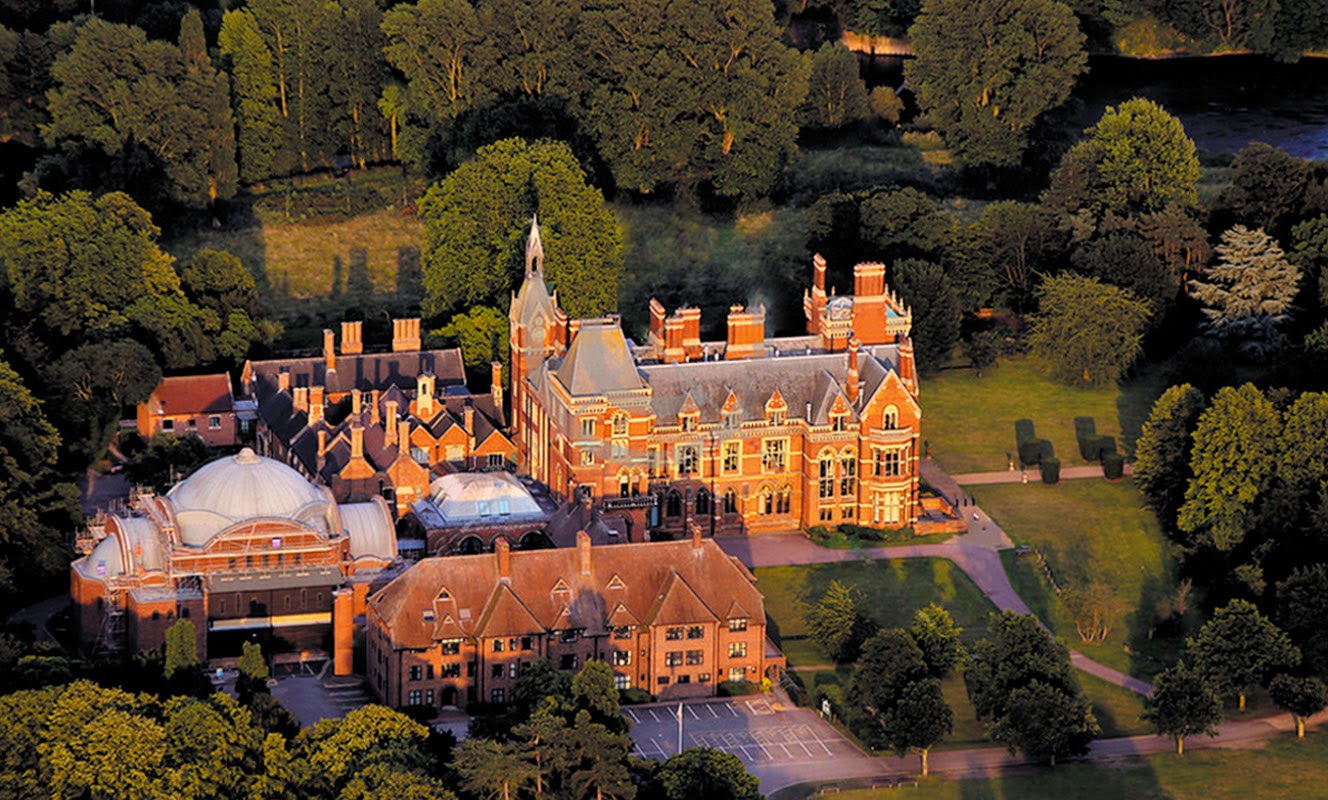 Kelham Hall is an impressive place, although somewhat of a mish-mash of styles.  The main building is Victorian Gothic, but there is also a large chapel, called The Dome, which was built in the 1920s by the monks who owned it at the time.
As we went in, we could only see one room and were disappointed, but then we found that there were lots more stalls in the Dome as well, so we were relieved about that. The signage could have benefited from being more obvious! 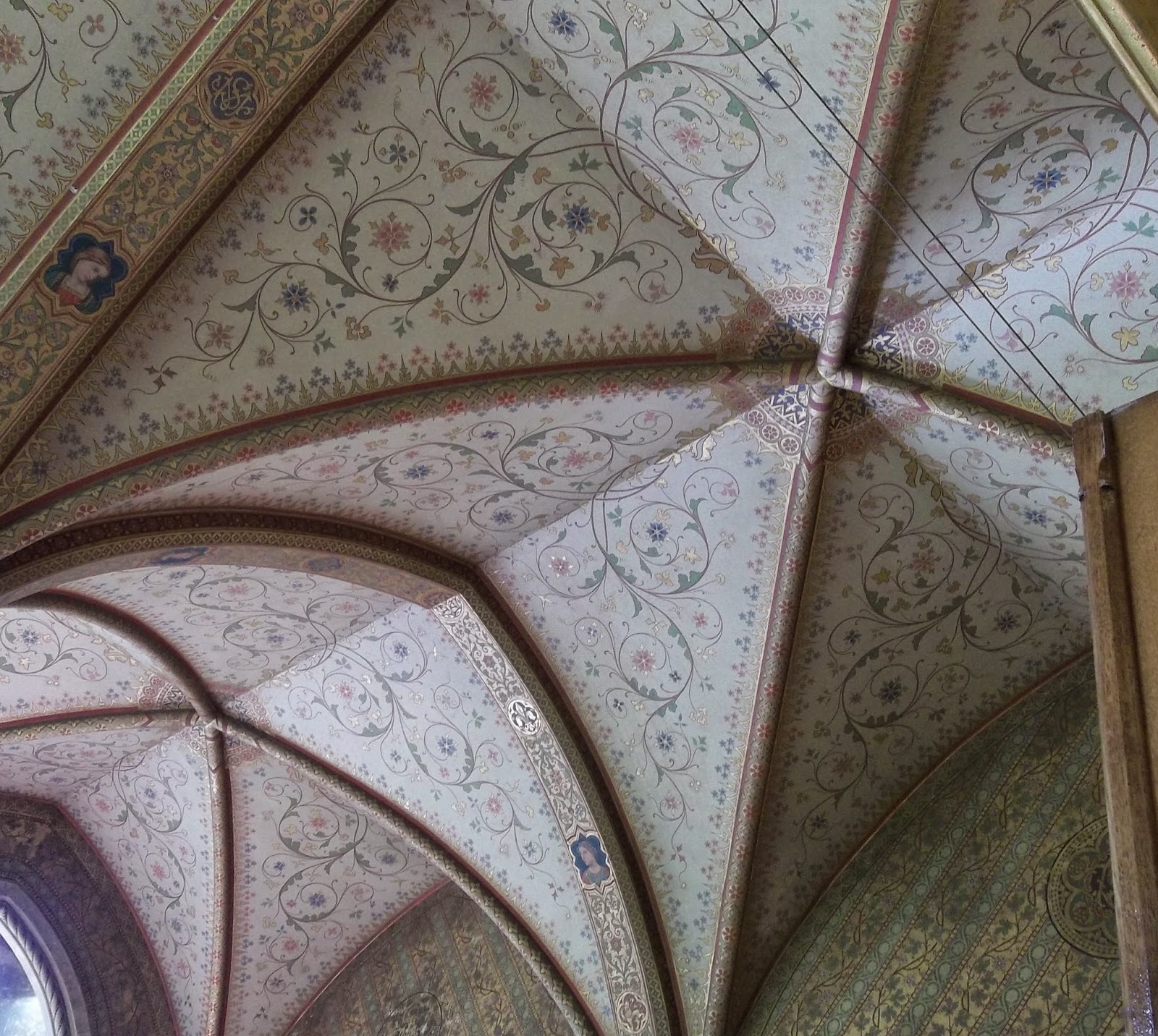 Before I tell you what I bought, I did spend a lot of time looking upwards. The ceilings were amazing. 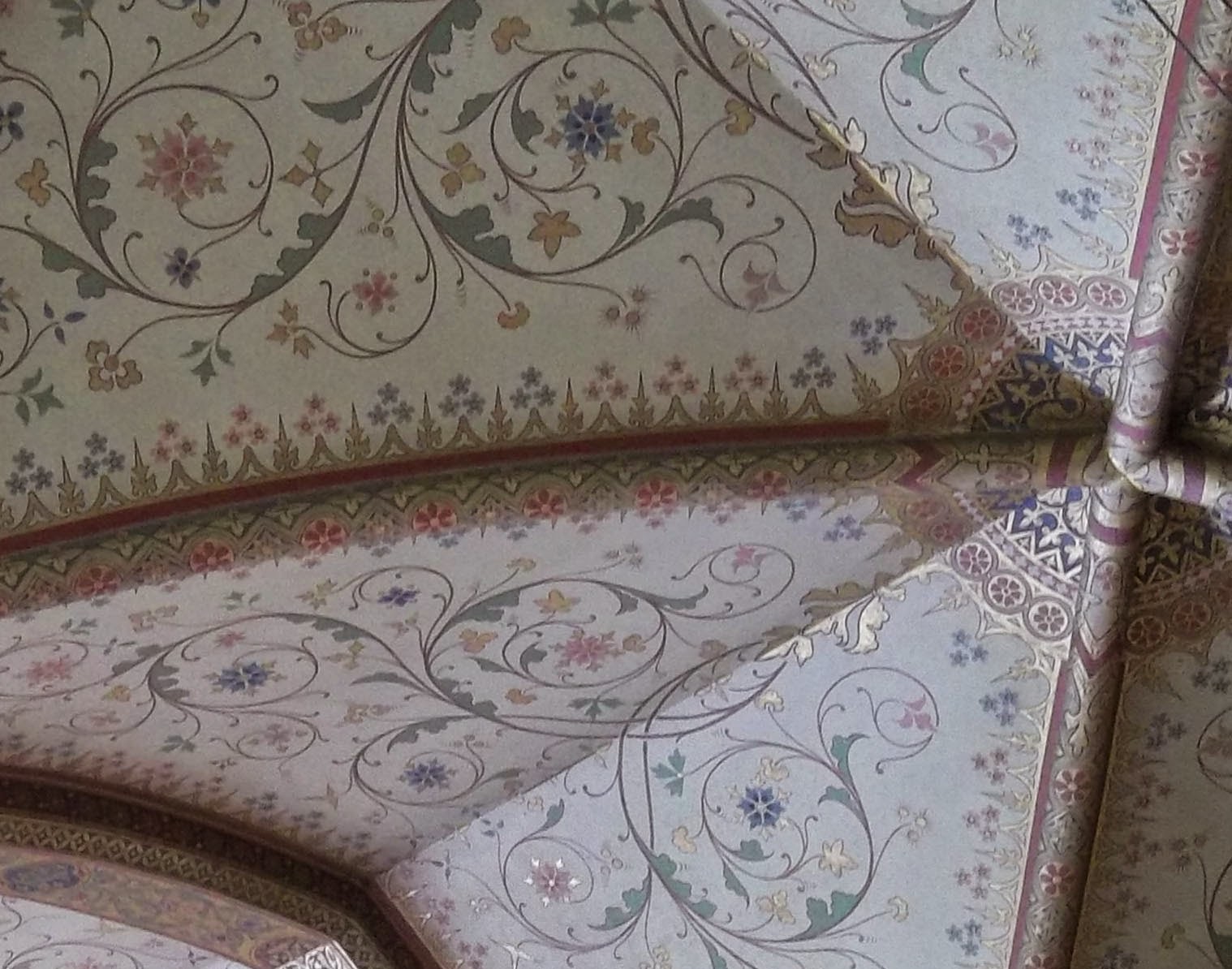 Yes, it's over the top, but you have got to love the Victorian Pugin-esque decoration! 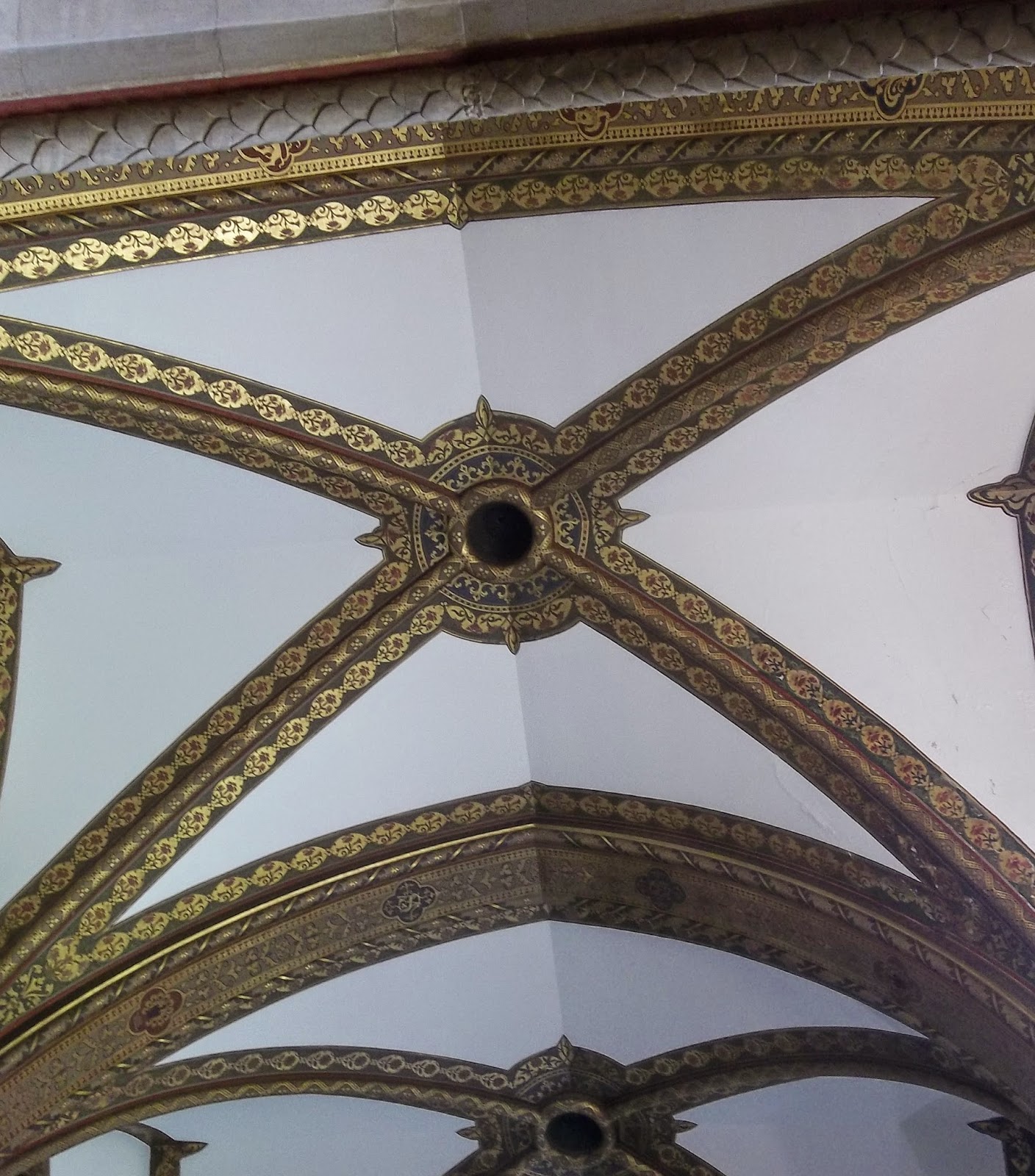 Flashes of gold abounded and there were very few unpainted areas. 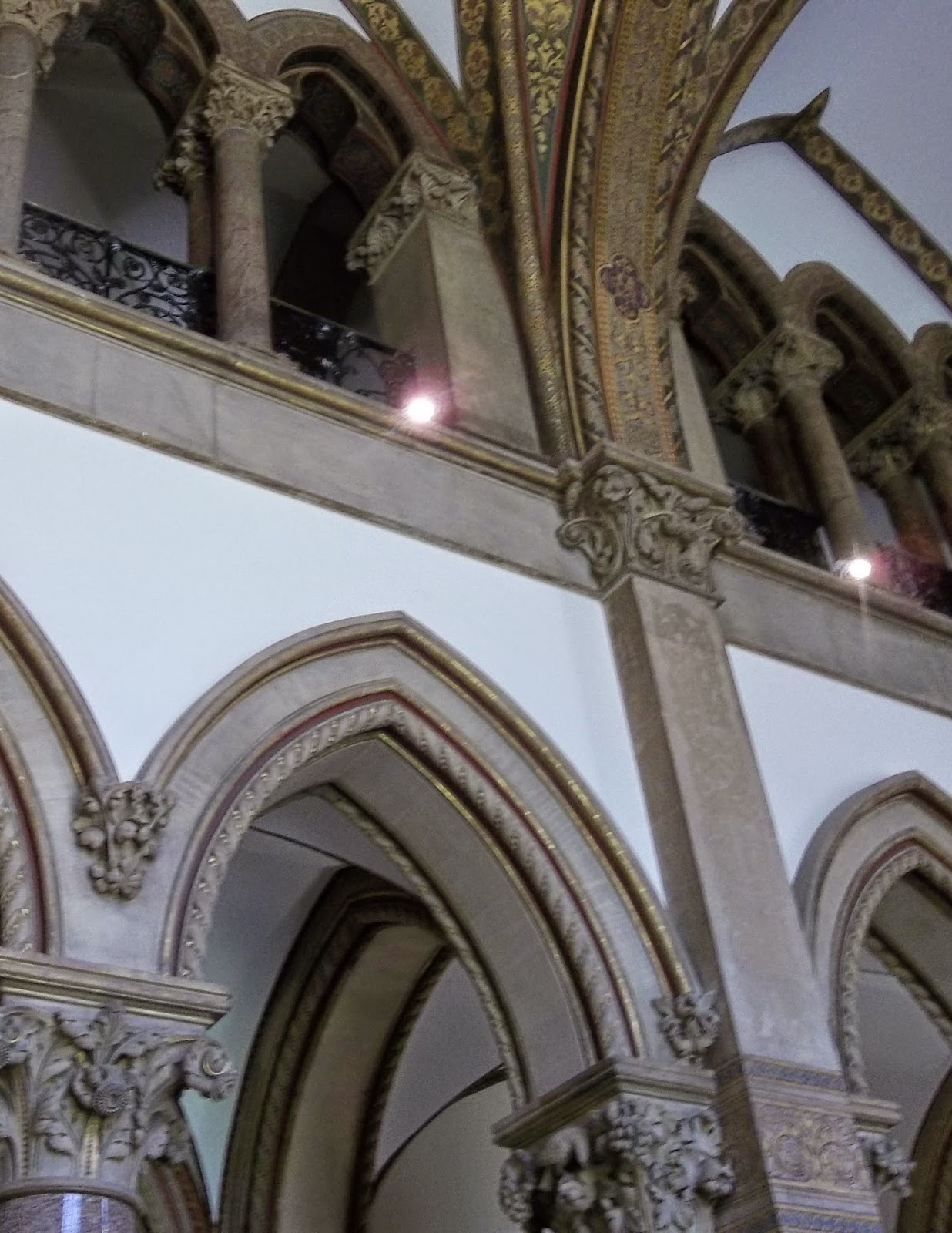 It could be a Cathedral. 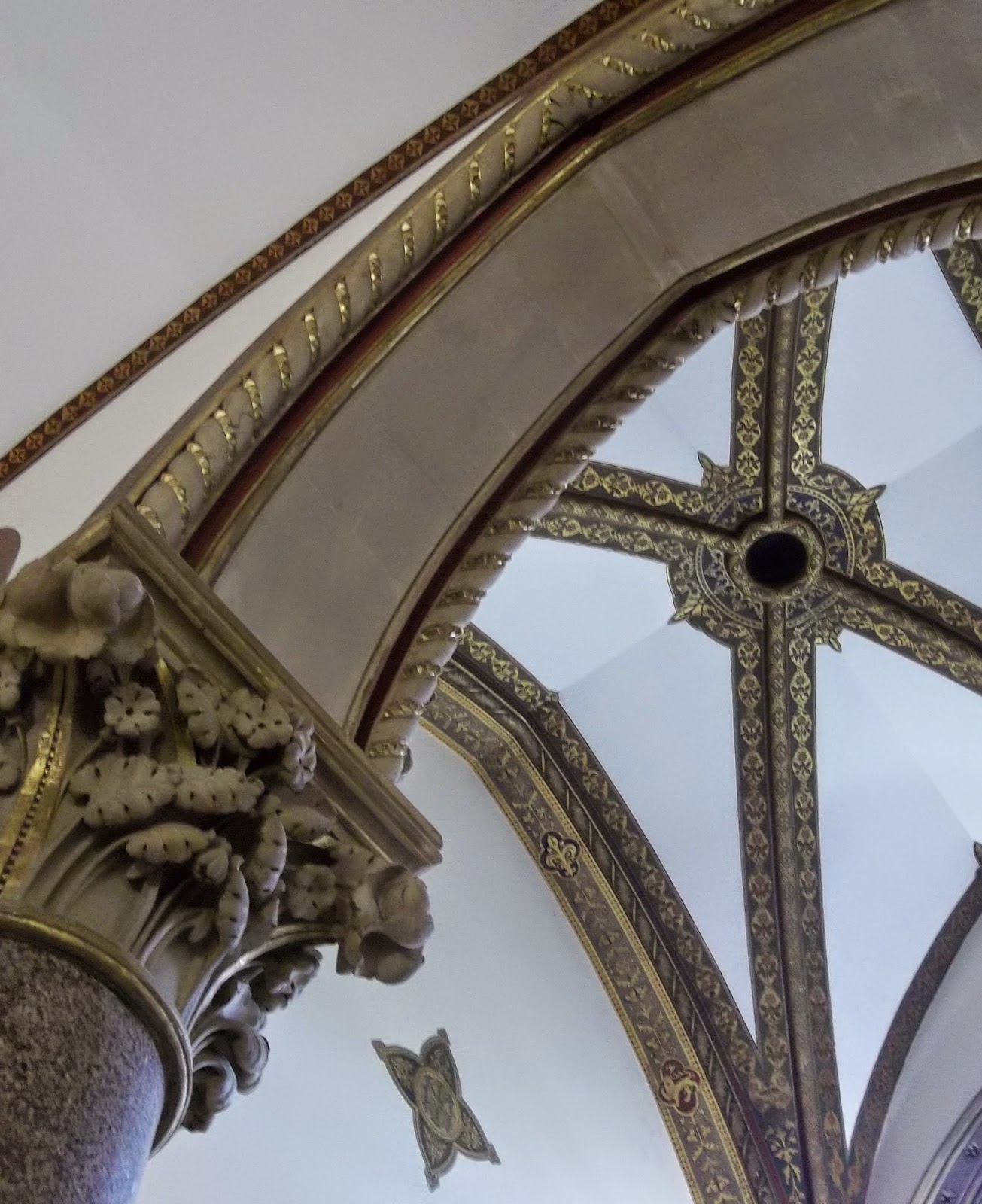 There were amazing carvings on the many pillars too.  We would love to go back and have a proper guided tour so that's something to add to the list. 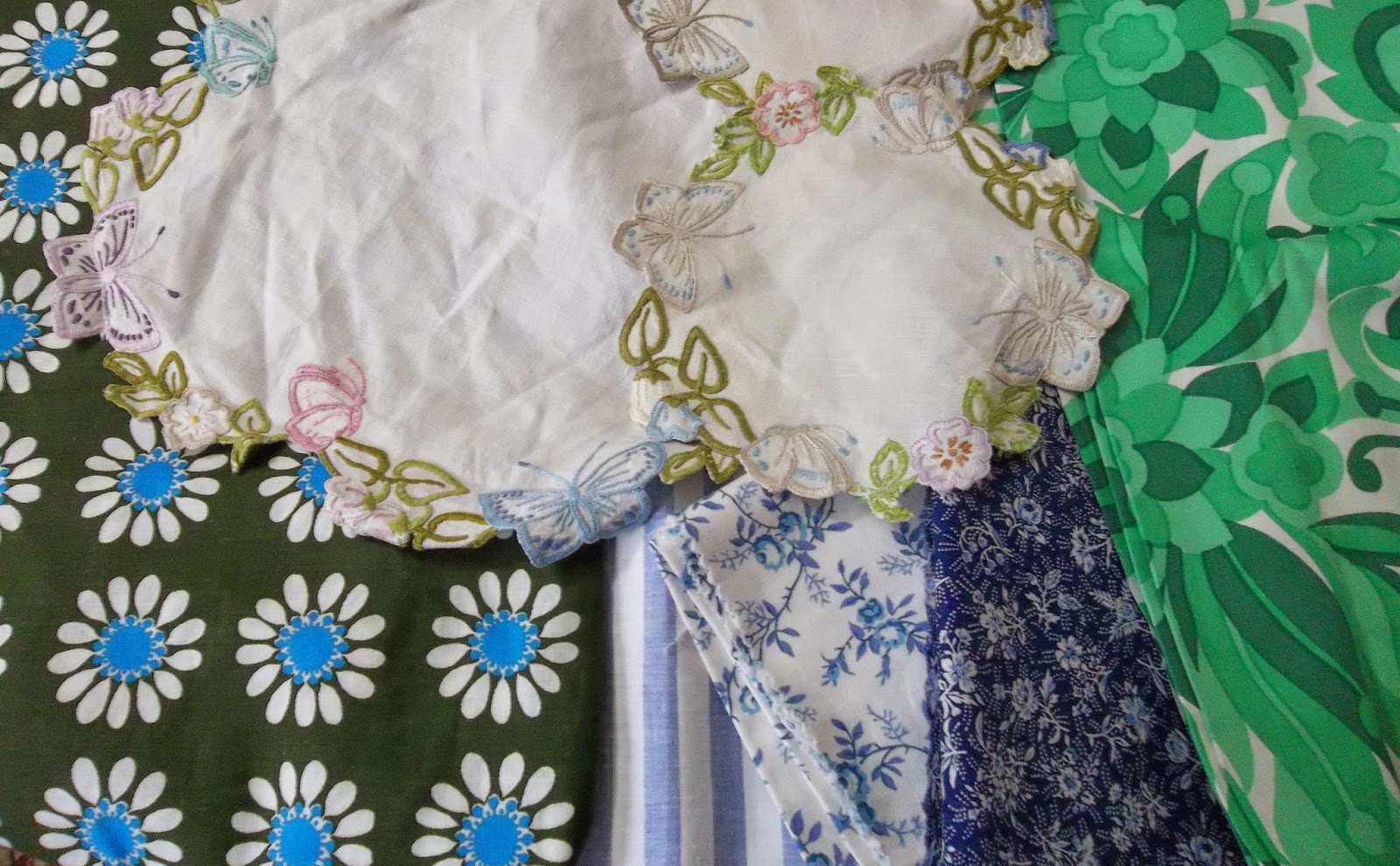 So, what did I buy?  Well, as you know, I do enjoy buying material and yes, that's what I bought this time.  The daisy pattern material reminded me of some pottery bowls we have at home and was so cheerful that it just had to be purchased.  Then there was an embroidered dressing table set.  I immediately thought that I could cut off the embroidery (said very quietly, as it could be thought to be sacrilegious!)and applique it to something else, like bunting. 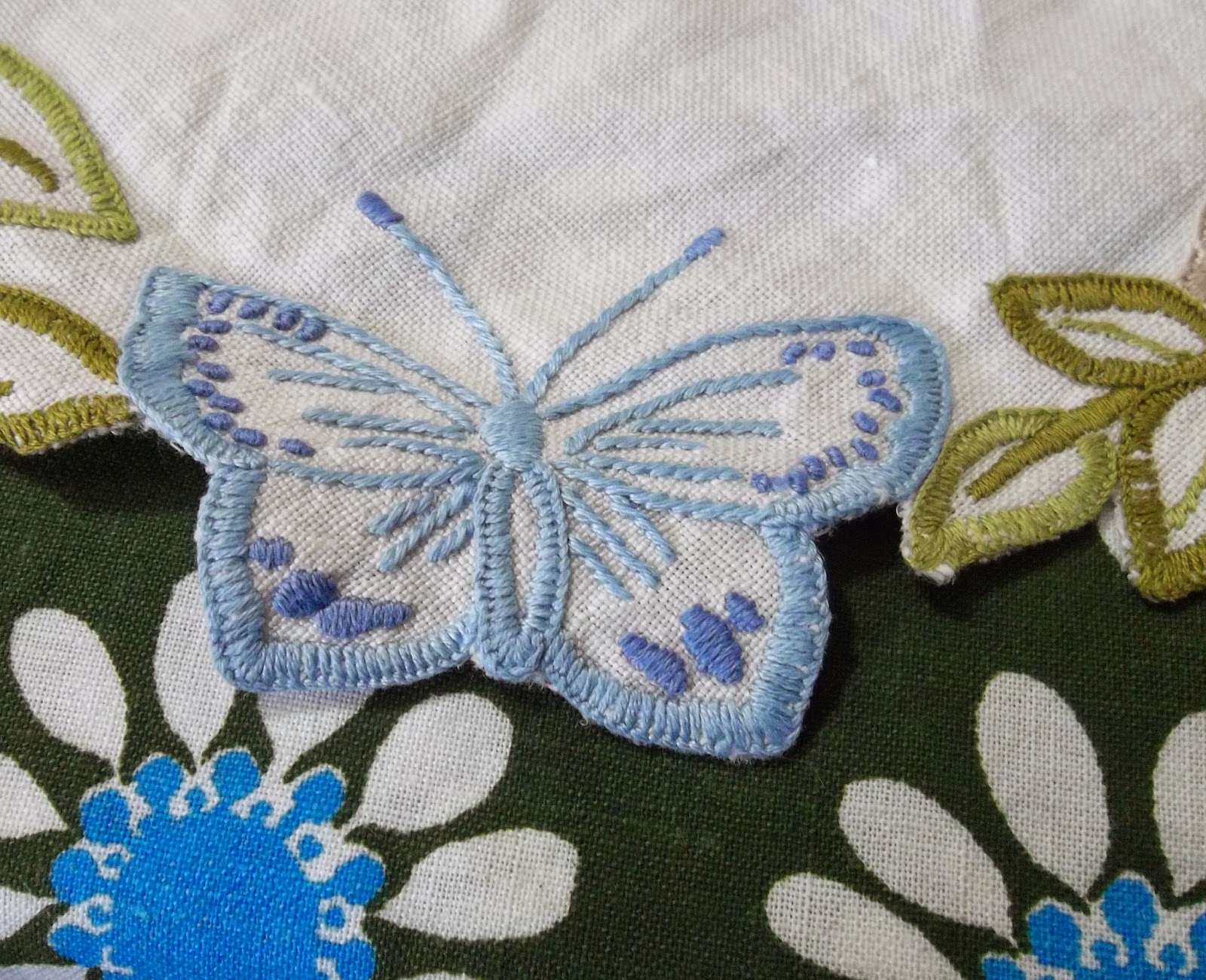 I love the butterfly motifs and I would like to be able to see them, rather than have them languishing in a drawer somewhere! It is very careful embroidery. 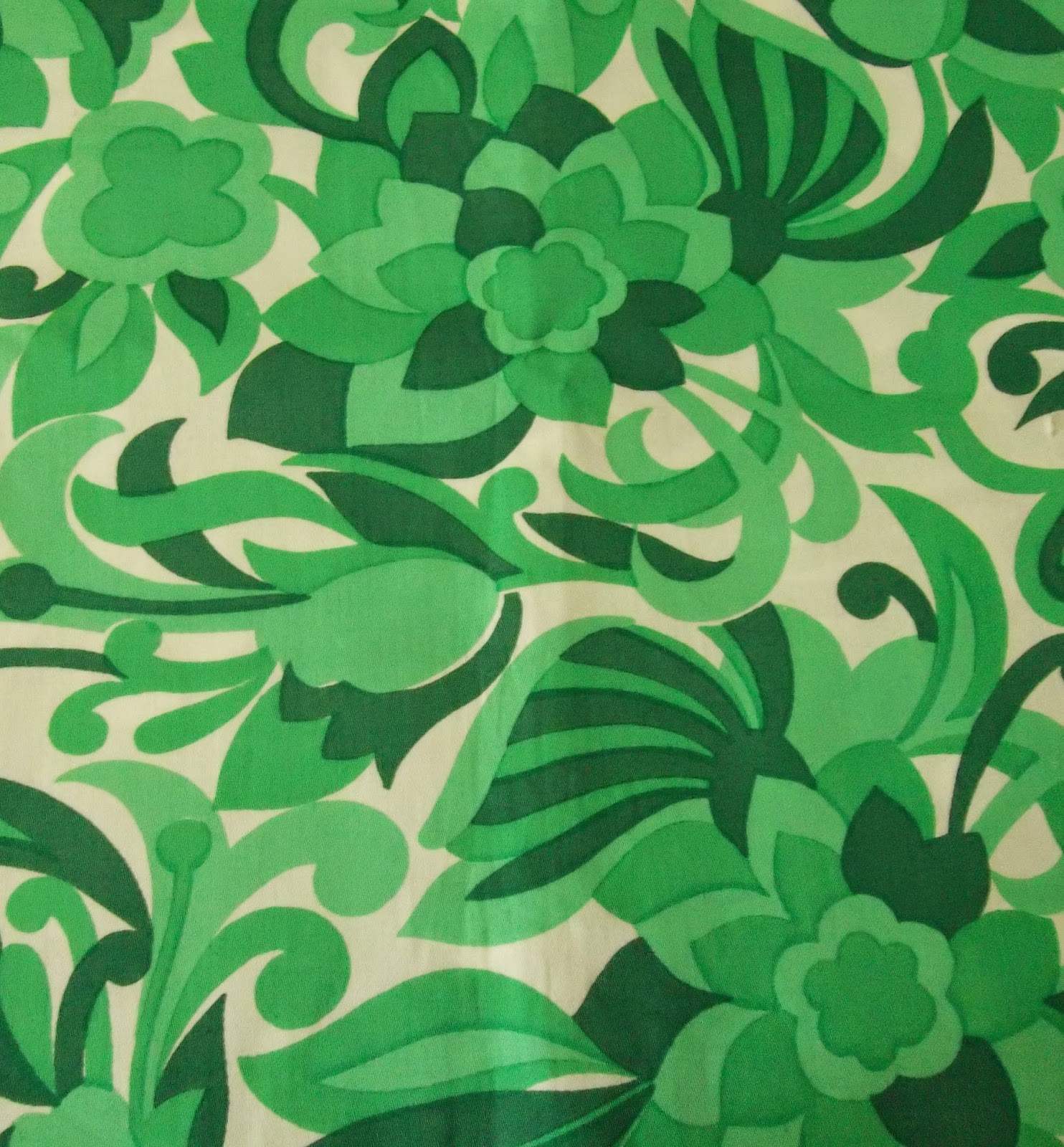 This mad green patterned material and I have met before, as I saw it at a previous vintage fair I went to and deliberated about it, before putting it back.  So, when I saw it again, I thought, it's fate - I am meant to have it!  It is a cotton and I think there is enough to make a sleeveless summery top.  Yet another thing to add to my 'It would be nice to make that...' list!  Unfortunately, there are no tea and cake photos as we didn't have any - the tea room was far too busy and the bar just didn't have the right ambiance!  I also paid a deposit on a 1950s style dress with a full skirt in a pink rose print which was lovely, but just a little big around the waist.  The lady from Unique Frocks is going to alter it for me, so I am looking forward to getting that in a few weeks' time.
I haven't talked about the blue materials which can be seen in the top photo, but they came from the Newark Antiques Centre which we visited before heading home and there is a story to be told there, but that is for another post...
Posted by Ellie Foster at 18:33 6 comments:

Spring is just round the corner

It is tantalisingly close, the Spring.  I can almost feel it, but then the temperature drops and I am reminded it is actually still winter.  The plants are reacting to the extra light and occasional warmth too.  Hydrangea leaves are growing, still tightly furled, but waiting. 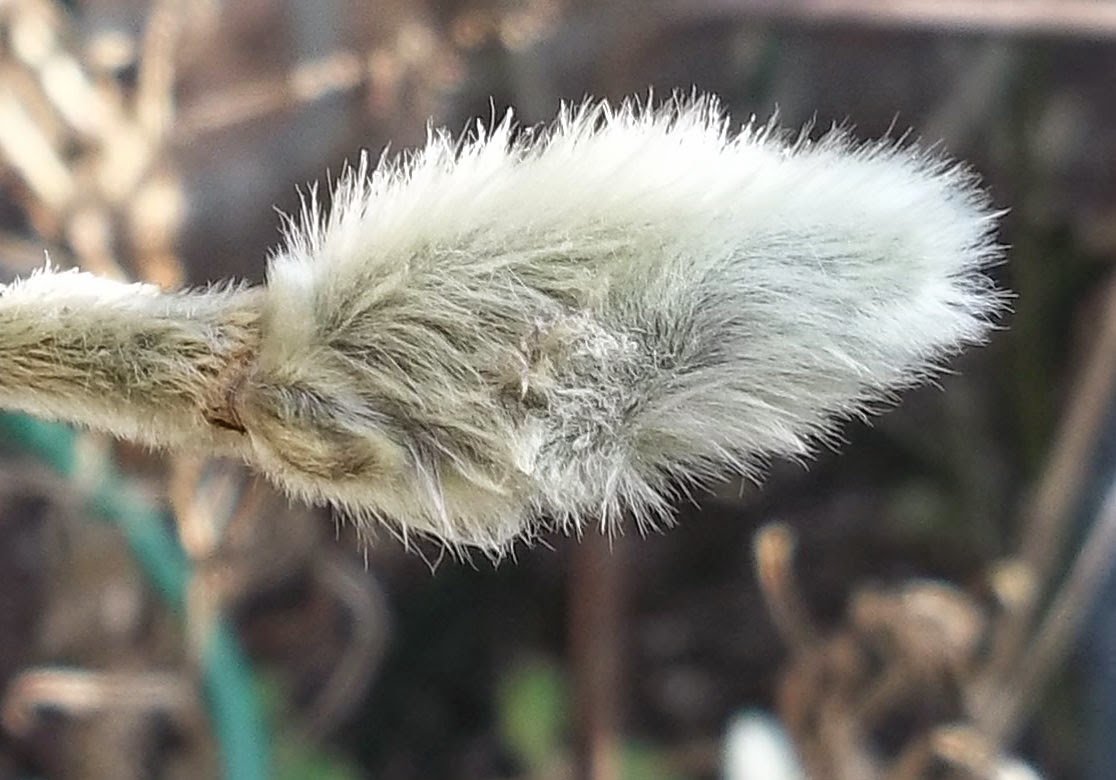 Magnolia Stellata has its fluffy flower cases - I just can't help but give them a little stroke as I go past. 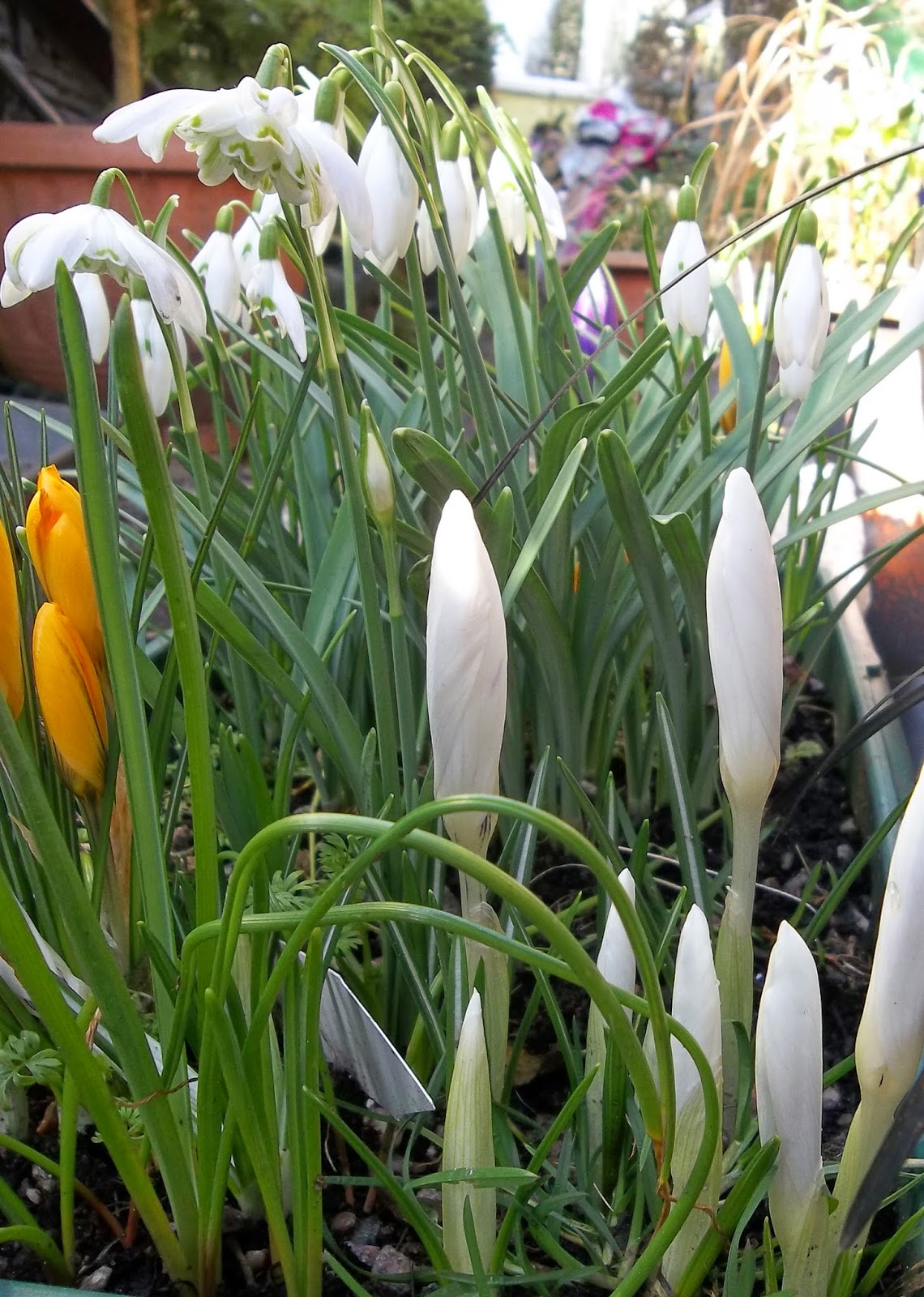 Cheerful crocus and snowdrops remind me that the colour in the garden is there. 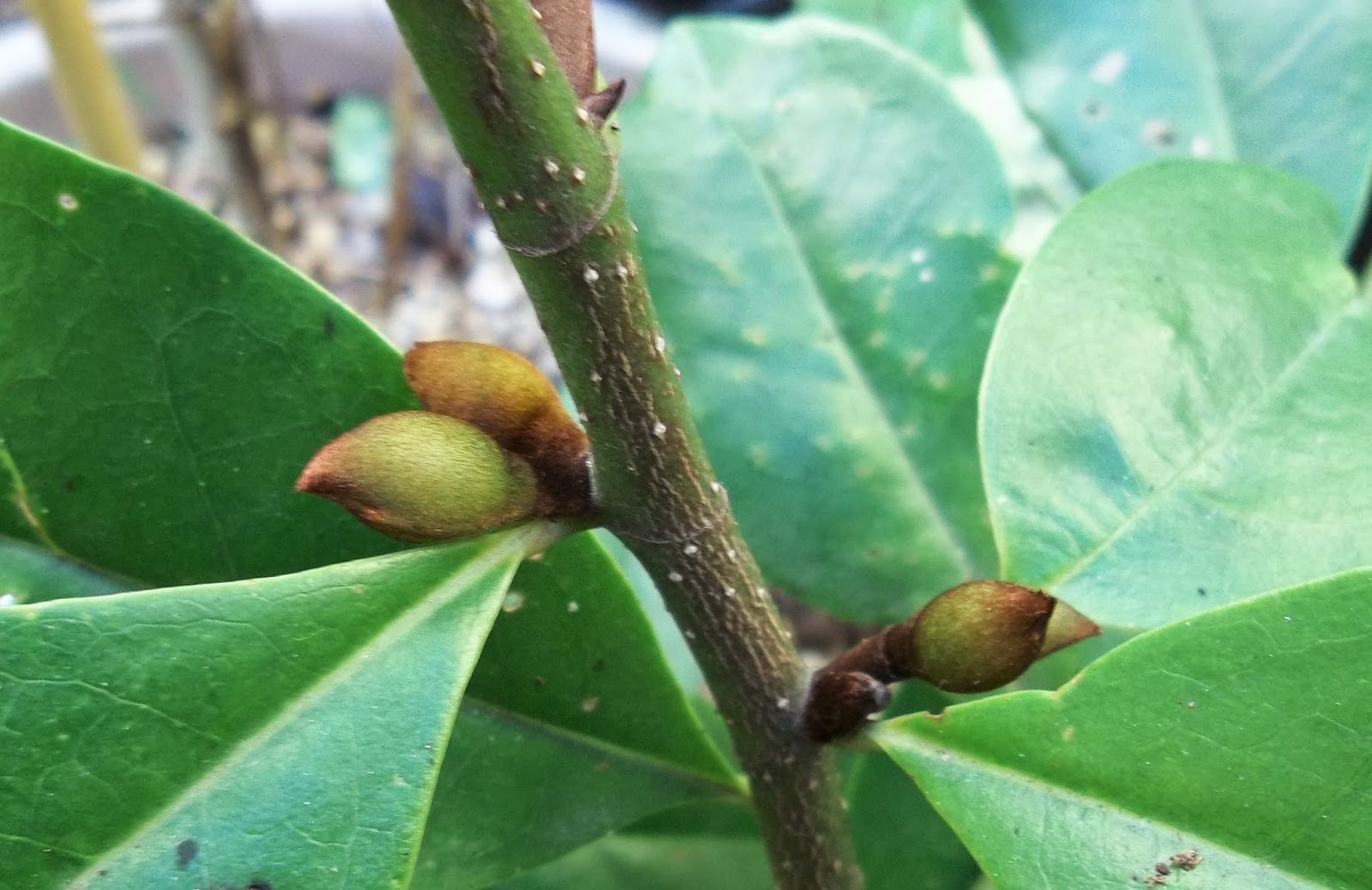 Magnolia Fairy Blush has flower buds which are getting bigger ever day. 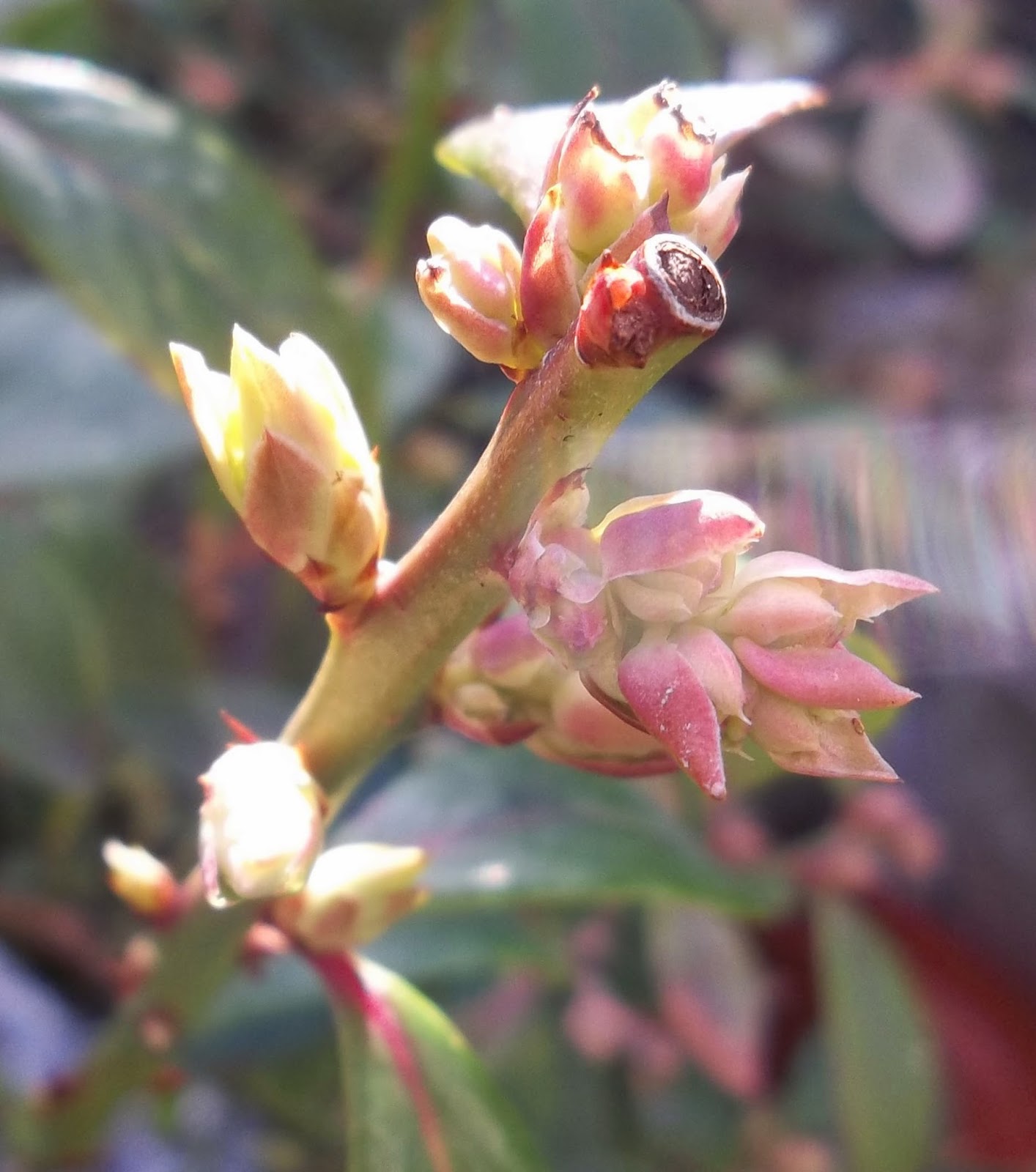 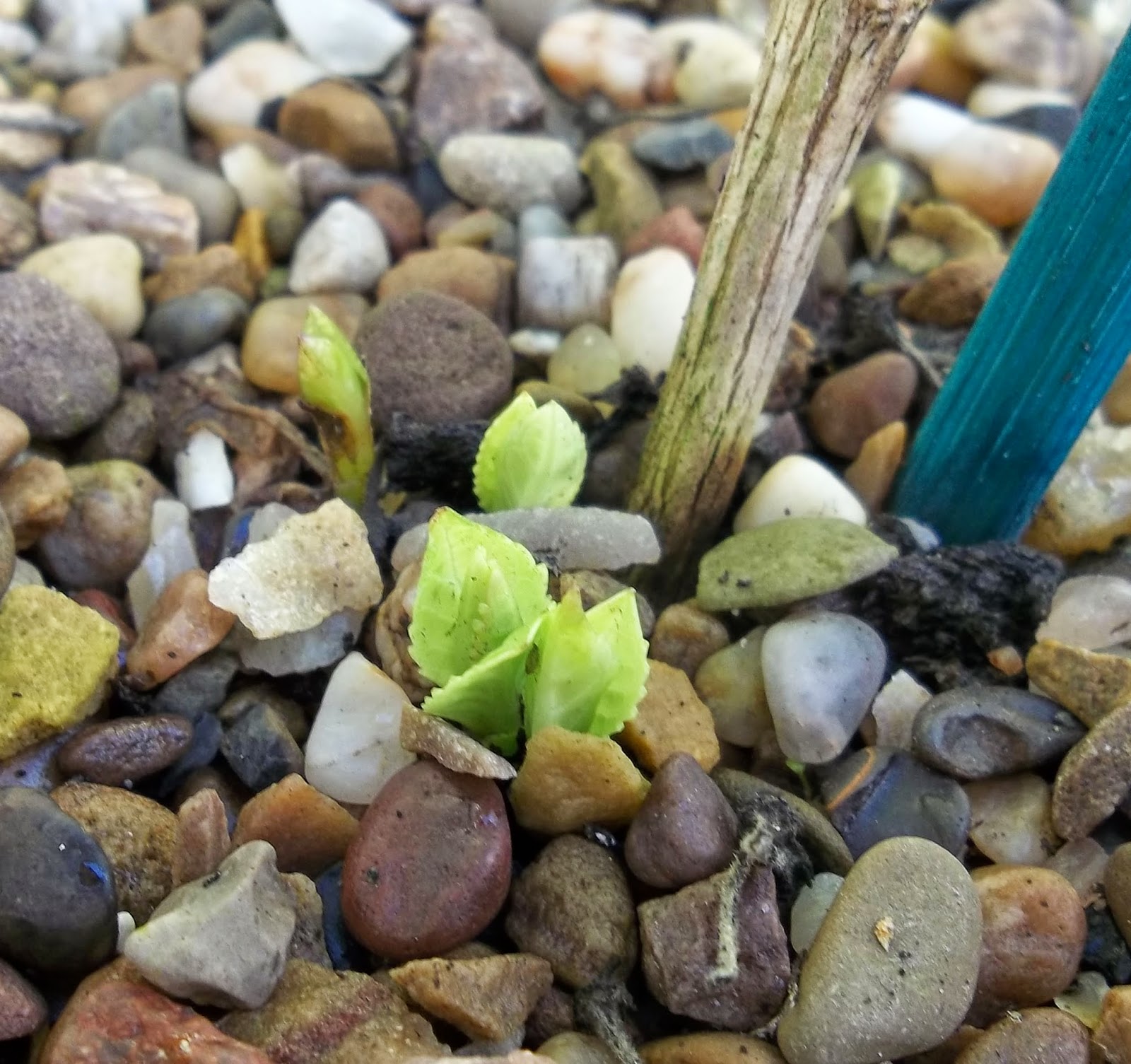 This hydrangea is putting out new shoots too. 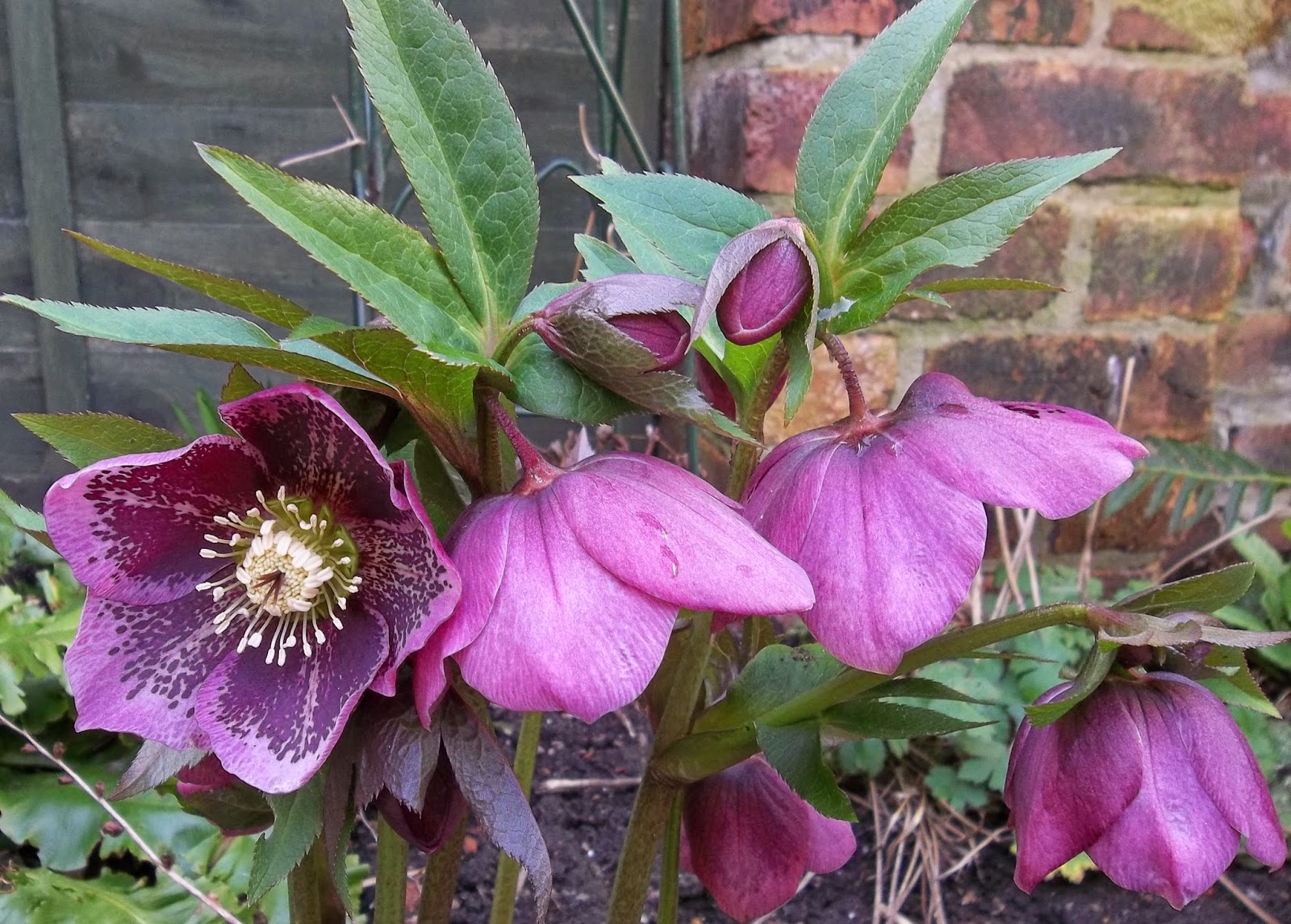 Hellebores are flowering now too and this one obligingly lifted its head for me. 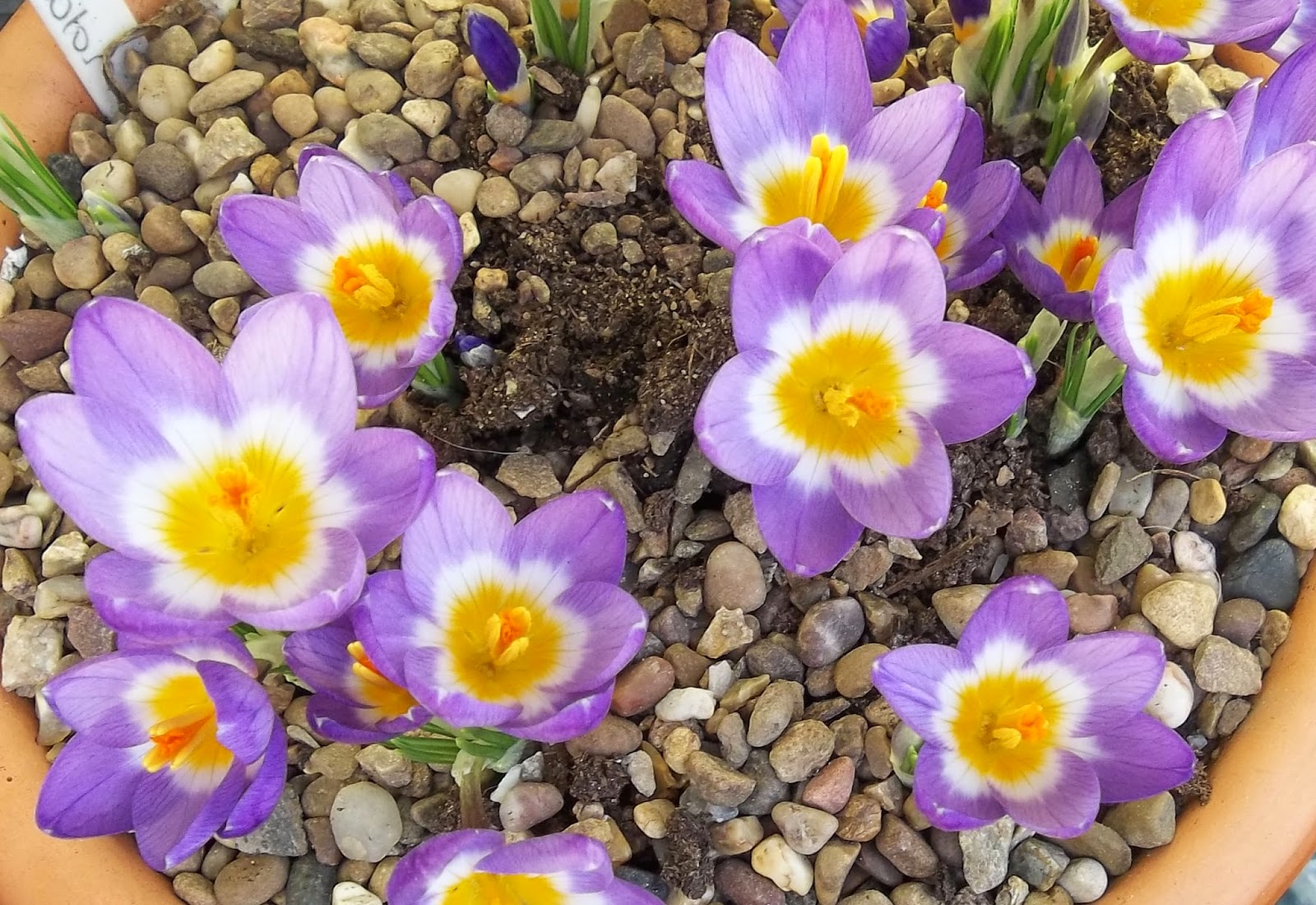 More crocuses - little delicate species ones called Tricolor, which they are.  Even the closed flowers display the three colours.  Hmm, that colour combination reminds me of something...what could it be?  Ah yes!

The inside of a Cadbury's creme egg! (Picture from wikipedia)
Posted by Ellie Foster at 13:41 10 comments: 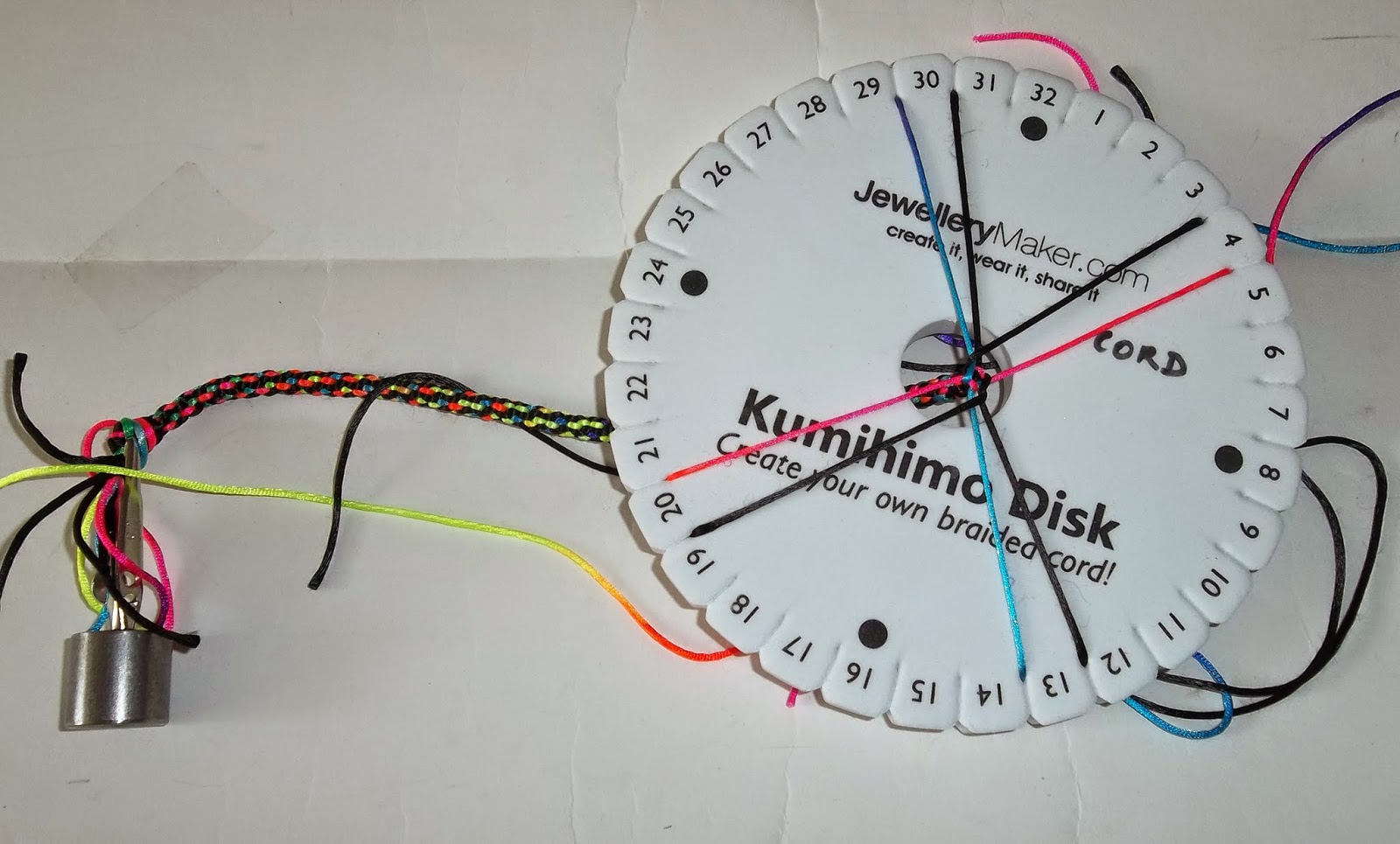 This year, one of the things I really wanted to do was to learn kumihimo, which is a Japanese braiding technique.  I have taken the plunge and found a basic eight strand braid to be remarkably easy to learn.  A disc is vital, as is a kumihimo weight which helps with the tension of the braid, 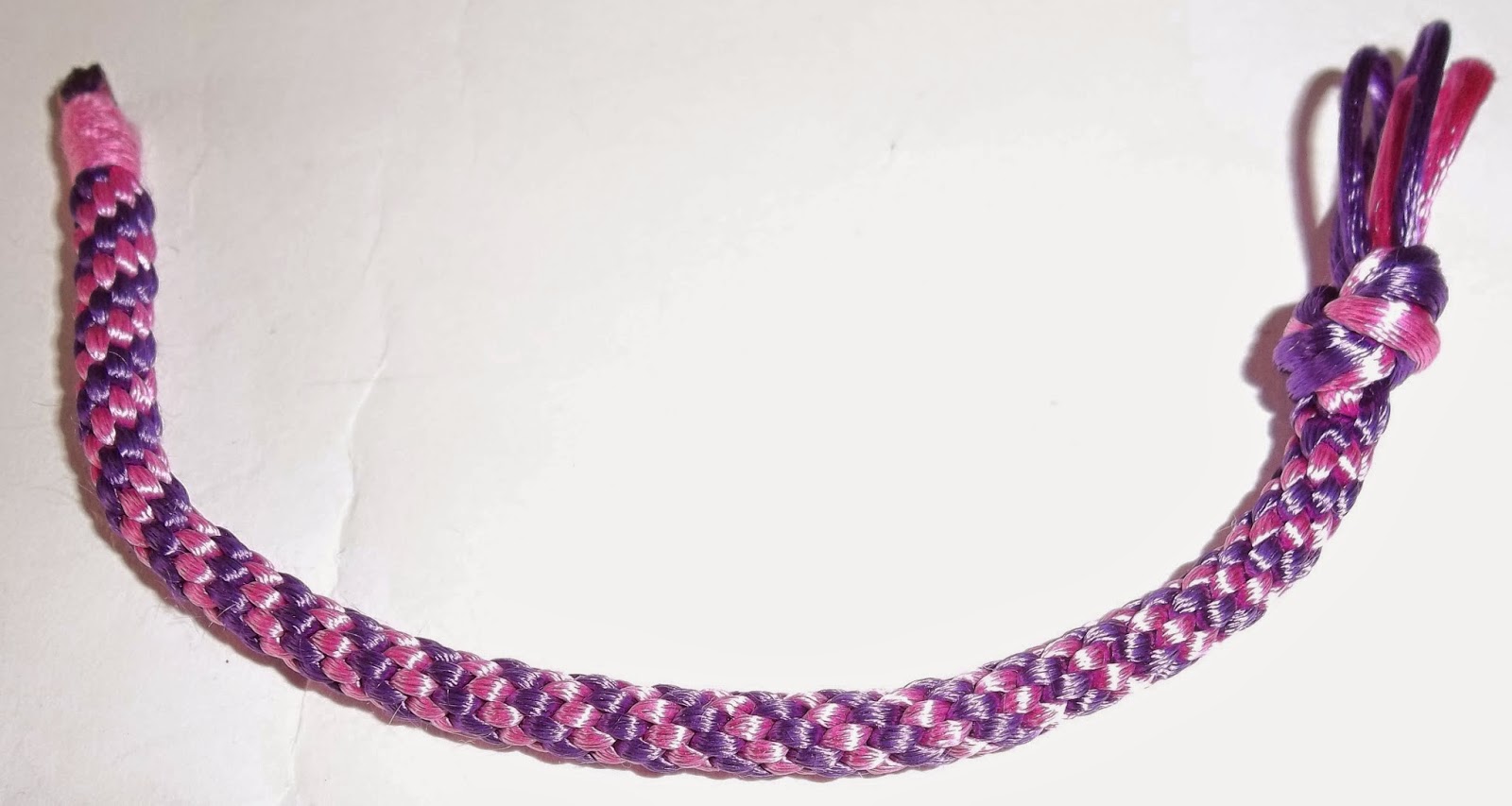 This pink and purple satin cord braid was my first attempt and I was really delighted with how it took shape.  It is a meditative process - top right to bottom right, bottom left to top left and turn - but this is only the beginning and there is a lot more that can be made.

I used organza ribbon for the blue braid, but it wasn't as smooth a finish as the satin cord and was a bit scratchy.  However, it was a good experiment. 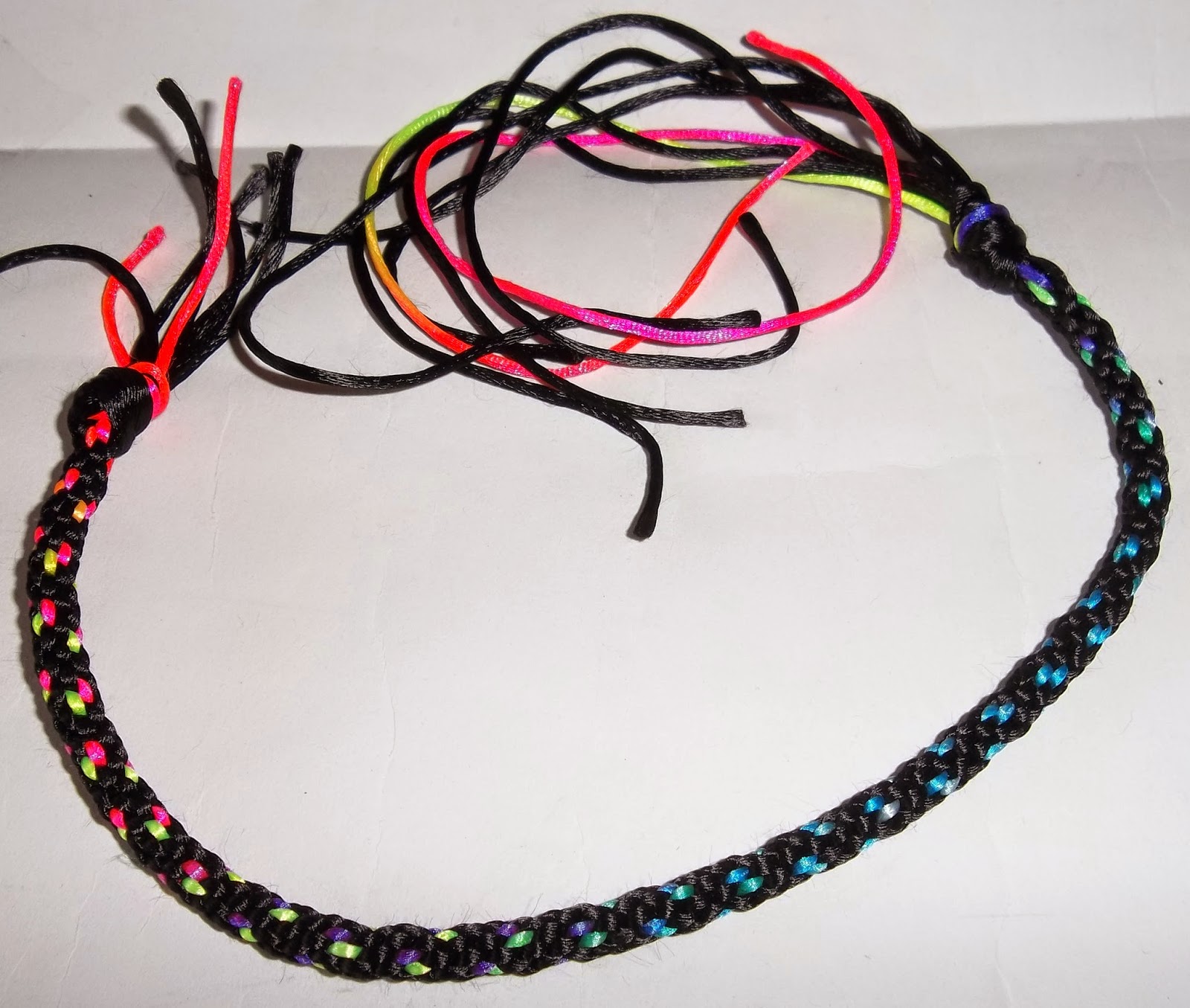 This one used rainbow satin cord with black and worked really well.  However, as you can see, none of these have been made into jewellery.  This is because I am considering how to finish a braid off.  You can buy kumihimo ends, you can make your own using wire, you can use ribbon cord ends... A bit of experimentation and practise may be in order.
Of course, apart from all the patterns you can create using different colours, different numbers of cords and different disks, there is the excitement of being able to braid beads and gemstones into the braid as you go.  Now that is something I definitely would like to try!
Posted by Ellie Foster at 14:11 12 comments: