I have been gathering suitable gifts, most with a sewing theme, but a couple of surprises too, for the Stitching Santa swap/exchange, hosted by Sewchet which I'm taking part in.  My parcel will be going abroad, so I need to get it sent off soon, so that it will arrive before Christmas.  Part of the fun is not knowing who is sending the gifts to you. 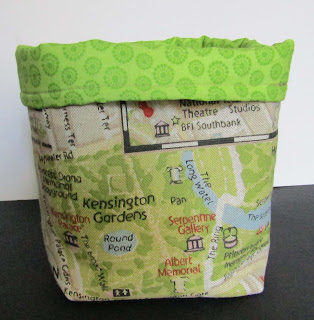 I have made a little fabric storage box, using a tutorial from SewforSoul, which can be found  here .  It was a great tutorial, easy to follow and I enlarged the pattern just a little to make a bigger version.  I used the fabric which I bought to make a doorstop back in 2015, which you can read about here.  So far, it has made a doorstop, a notebook cover and now a fabric box.  I used fusible wadding to give the material a bit of added strength and that was a first, but was easy to sew through and worked well. 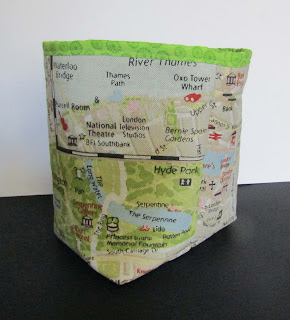 It could have just a little bit of the inside material showing, as above,  but Chris thought it looked better with a bigger amount on show, so that's what I did. 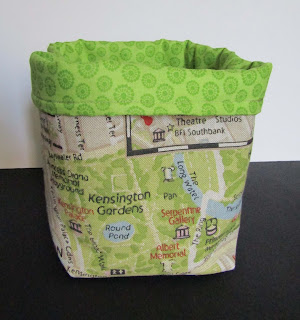 I used some green cotton material for the inside which worked really well, picking up the green on the outer fabric.  I am really pleased with the result and hope that the recipient will like it too.
Posted by Ellie Foster at 20:35 6 comments: 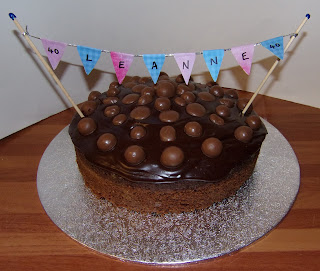 In amongst preparing for the craft fair, birthdays of friends and colleagues have come and gone.  My colleague, Leanne, had a big birthday last year and I made her the cake above with birthday bunting. 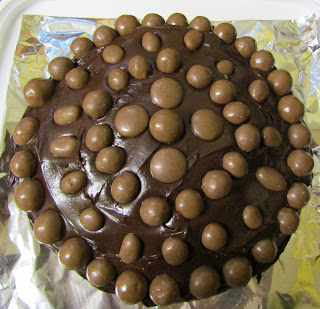 This year, it was the same 'Russion Roulette Revels cake', minus the bunting.  I have written about this cake before and it is a great recipe, keeps moist and has the most delicious chocolate fudge icing, but works equally well with chocolate buttercream.  The Revels are a chocolate coated sweet, with various fillings - honeycomb, toffee, orange, chocolate, raisins and coffee.  The last two are my least favourite and I usually get more than my fair share of them!  Leanne says she always looks forward to this cake. 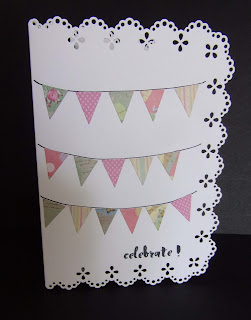 I have also been making cards, again with bunting (a bit of a theme is developing here, but it is very celebratory, isn't it?).  This was for a birthday in September. 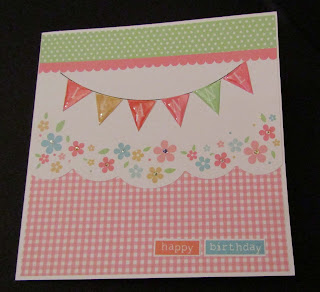 This was Leanne's card this year.  I used glossy accents on the bunting to make it shine and used a kit to create the card. 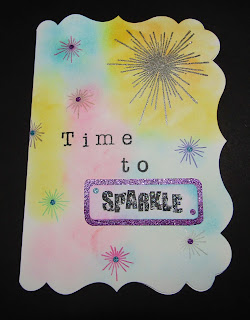 This is for a colleague's 50th birthday this week and involved stamping, heat embossing, glitter and glitter paper.  It was very enjoyable to make too. 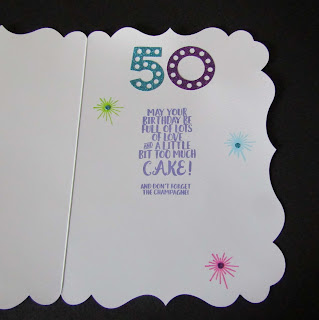 I added a few stamps and die cut numbers to the inside too. 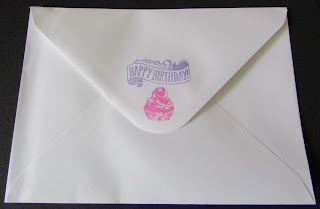 The great thing about using stamps is that the envelope can be decorated too.  I have a feeling that I may be making more cards in the future... in fact, my mum is 80 in less than a month, so that is a perfect reason to make another card.
Posted by Ellie Foster at 16:18 4 comments: 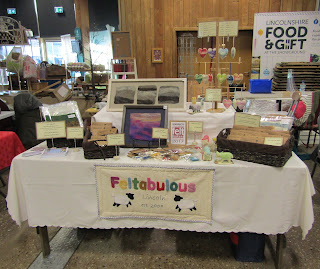 I had a good day at the Big Craft Event on Sunday.  The weather was bright and sunny and there were lots of visitors.  Chris and Rachael were wonderful - I couldn't have done it without them.  Chris had made me a shelf last week, when I realised that I needed something substantial to put my framed work on (nothing like leaving things to the last minute, Ellie!).  Rachael was great with arranging the items and having ideas for how to improve for next year and generally being fun to be with. 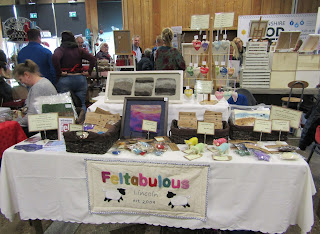 Lots of people were very interested in my felt work and in the screen printed pieces in particular, so this is an area I am going to work on next year.  There were enquiries about cards, so that will be another focus, as will smaller pieces.  The birthstone hearts (felt hearts with geniune gemstone charms for the different months - they are on the seasonal tree display) weren't as popular as I had hoped, so I will move away from those, although there were so many hearts on so many stalls, that perhaps people had reached saturation point with them.  Out of all the hearts, the small ones were the best sellers, so I may continue with a few of those.

The biggest surprise was the needle felted sheep, which I had added as a bit of a last minute thing, in order to catch people's eye and encourage them to look at the other items.  I had managed to make six in the end and they all sold.

They had all been given names and customers seemed to be drawn to them.

They are very cute, but I was delighted that customers liked them as much as I did.

I did stab my finger several times making them, but I am getting better at that and I also need to pay attention to my posture as the hours I spent on the last two sheep took their toll on my back. So, more sheep is definitely the way to go!
It was an enjoyable experience and I like meeting people and spreading the joy of felt making.  I also need to look at providing workshops as I had a few enquiries about that too.  In the end, I covered the cost of having the stall and made a little bit of profit too.  I have signed up for next year, so will be working on new items and lots of new ideas over the months.
Posted by Ellie Foster at 11:13 5 comments:

One more week until The Big Craft Event (and the flock is growing...slowly) 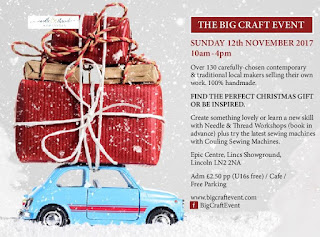 I can't believe how quickly this year has gone.  It doesn't seem two minutes ago when I was saying to myself, "I've got ages until November", but here we are and it's next weekend.  OH, MY GOODNESS, NEXT WEEKEND!
I am looking forward to it although I am a bit nervous too and hope that I will sell something, but it is mainly a way to get my name out there a bit and talk to people.

My small flock of needle felted sheep is growing, albeit slowly.  I am hoping to make a couple more before next weekend - I think we need a blue one!

They look like they're either going to start singing, or are taking part in a police line up (or, as Chris so wittily said, a 'fleece' line up!) (edited to add: my friend Rachael suggest it could be the 'ewe-sual suspects' - see what she did there?!  Don't we all love a sheep-themed pun?) in this photo, but they do make me smile.  I hope they have the same effect on people at the craft fair next week.  Right, back to it - now, where did I put my felting needles?
Posted by Ellie Foster at 14:36 4 comments: