My first beaded Kumihimo jewellery - as seen on TV! 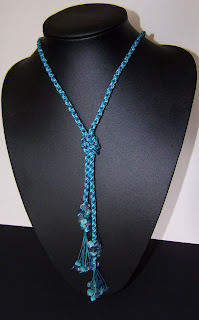 You may remember that I started trying kumihimo ( a Japanese braiding technique) to use in my jewellery making.  I managed an eight strand braid in satin cord and was happy with that, but I really wanted to be able to add gemstones into the braid. 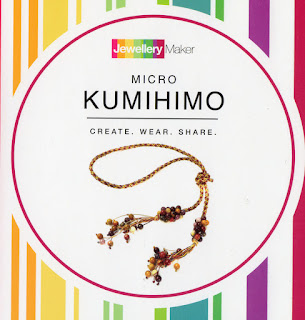 I bought this DVD from Jewellery Maker and watched it several times.  One of the projects featured was a Lariat style braided necklace, which you can see on the cover above and I knew I had to try it.  The thing I liked most was that it didn't use any findings (clasps, jump rings etc.).

I gave myself a bit more of a challenge by using gemstone chips, which were a bit more tricky to thread on the the S-Lon thread I was using.  (This thread is my favourite at the moment).  I used clear nail varnish to create a 'needle' at the end of the threads and the chips went onto the thread much more easily.

Braiding is a meditative process which I really enjoy and it can be picked up and put down as you wish.  So, having used some of my favourite colours and gemstones (sky blue apatite, neon blue apatite, amazonite and tanzanite), I decided to send a photo to Jewellery Maker Wall of Fame.  This is where JM features jewellery made by viewers from mainly JM supplies and they will show a selection on the morning shows. Everyone who enters (whether their photo is shown or not) is entered into a draw (which takes place on a Wednesday) to win £100 of credit or £50 of credit with JM.  That would be rather nice...
I sent a photo in and forgot about it,  I was half watching the programme on Saturday when what should I see, but my necklace being featured! ( I managed to get the images from the JM bit on youtube - the shows are uploaded).  (I'm not being sponsored by JM - I am a customer and have been for at least four years). 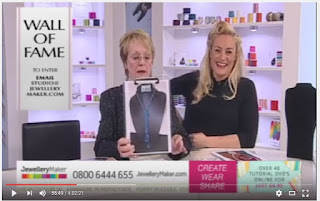 Here is my necklace's moment of fame! 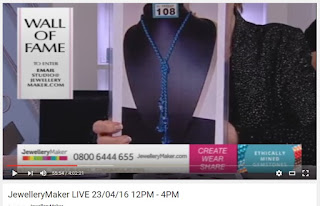 Here's a close up.  I was very excited, as you can imagine.  I am working on some more of these necklaces using 6mm gemstones.  I think I may be getting obsessed... 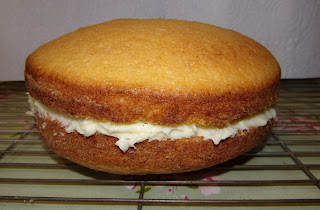 As I usually do, I have made some lemon curd - I associate the sunny yellow and slightly sharp taste with Spring.  I made a cake (the thought of lemon curd and buttercream was too much to resist) and to avoid the usual problem I have of the layers of buttercream and lemon curd fighting against each other and causing slippage of the top layer of cake, I mixed the lemon curd into the buttercream. Success! 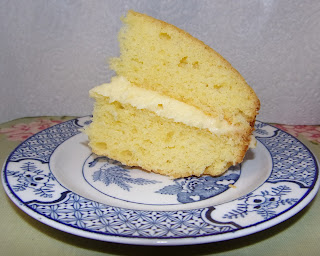 The cake stays intact, no slippage of the layers and the delicious lemon flavour comes through the buttercream. 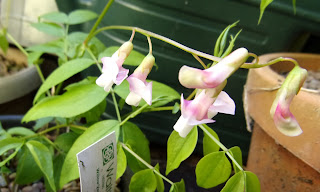 Other things making me happy are in the garden.  My Lathyrus vernus Alboroseus is flowering again... 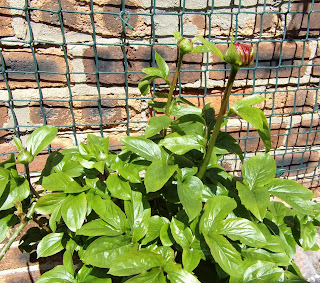 ...and the patio peony I bought last year - Madrid I think, or it could be Athens - has six buds. 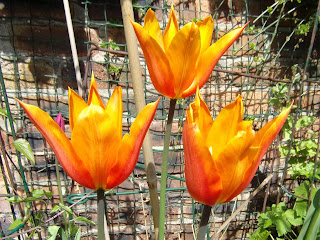 It's the start of my tulip season and these Ballerina tulips (my favourite) were from last year or the year before as I planted them in the border after taking them out of their pots.  They are also earlier to flower than the ones I bought this year. 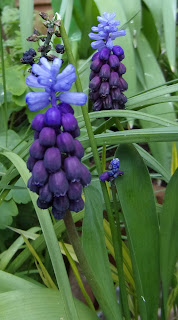 Muscari latifolium which is my favourite grape hyacinth, due to the lovely shading. 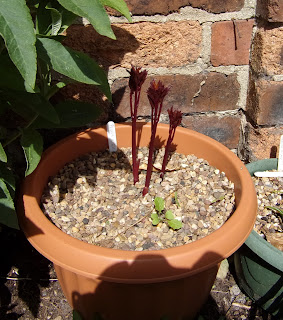 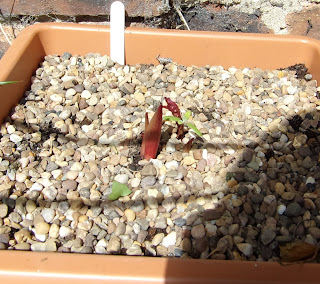 Another patio peony just nosing out of the ground.  Rome again (as I received two small and separate plants in the order, rather than one larger one.)

An epimedium which I bought many years ago and thought was lost, has just made its presence known and is flowering beautifully. 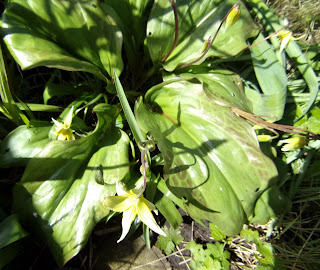 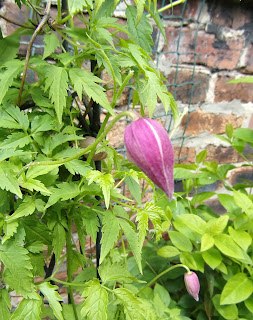 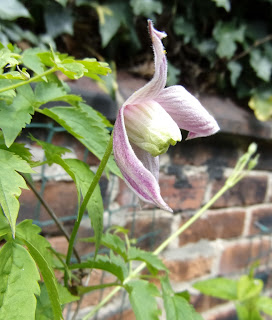 ...and one open flower.  I hope there will be lost more to enjoy for the next couple of weeks of April.
Posted by Ellie Foster at 12:18 2 comments: 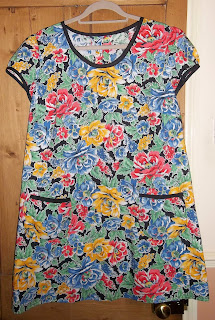 In October 2014, I had some sewing lessons to help my confidence, and made lots of interesting things, including a tunic dress (the Kate pattern from Sew Me Something) and I used some vintage material - see the photo above.  I really liked it and made several others in different material.  While  I wore the original, somehow the others just didn't feel comfortable around the shoulders and under the sleeves, so they languished.  The pattern has to be loose as there are no fastenings, but the shoulders were a bit too wide for me.  However, I bought the Beatrice pinafore pattern and when it arrived, having had a good look at it, I realised that I could take the sleeves off the tunics (using the Beatrice pattern to help me), bind the edges and wear them as pinafores with a long sleeved t-shirt and leggings.  So that's what I did! 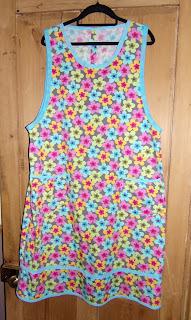 I now have several pinafores ready to go - I love this flowery material as it makes me smile. 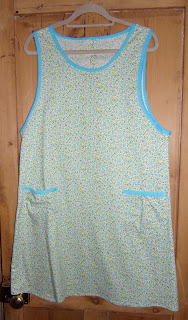 This was a 'ditsy' floral print bought from a vintage fair. 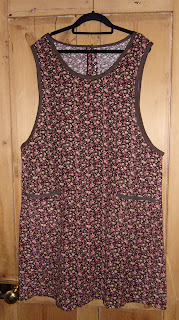 This one was floral baby cord and I have worn it quite a bit, including to work. 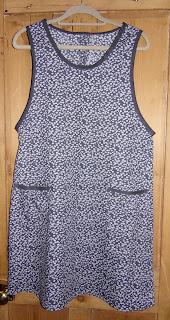 This white and grey floral will be great as I can put pretty much any coloured top under it.  I have since bought some green floral material and am going to challenge myself by creating my own bias binding.
I have more material waiting and I am thinking I may make another one...or two...
Posted by Ellie Foster at 16:32 10 comments: 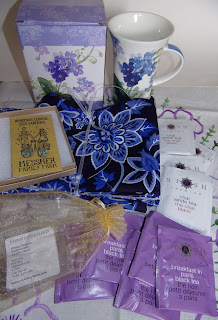 I have recently completed another swap, although this one was an exchange.  It was the 8th Annual Tea cup and Mug exchange, organised by Stephanie at The Enchanting Rose.  The idea is a lovely one - send a tea cup or mug along with tea or coffee and other gifts (if you wanted to add any extras) to your recipient.  Someone else would send you a gift too.  I signed up and was sent my recipient's details - Sandra at Ravenhill Cottage.  You could also add in some details about yourself, such as favourite colours, blog information, hobbies.  So, I sent my parcel off to Sandra in Canada and duly received a parcel back from Mary in the USA.  She had obviously done her homework and had chosen the most lovely gifts.  There was a beautiful mug with blue flowers on it, two very generously sized pieces of material (which I was very excited about), black tea and white tea, handmade earrings in the shape of seeds and some petunia seeds. 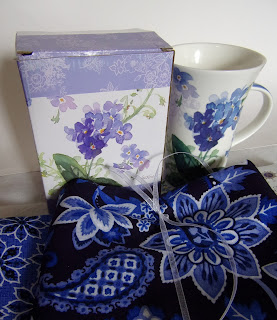 I think she had chosen beautifully for me! 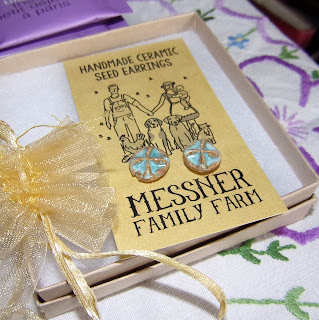 How pretty are the earrings?  A HUGE thank you to Mary for the generous and thoughtful gifts. I am really looking forward to making something with the material. 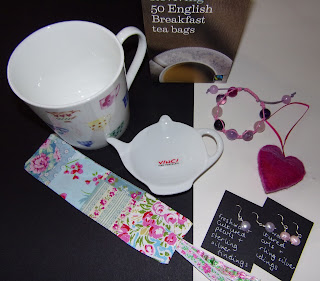 I found out that my recipient liked pink and purple, so off I went.  I made a bookmark, pearl earrings, a bracelet, and added a tea bag stand and English breakfast tea. 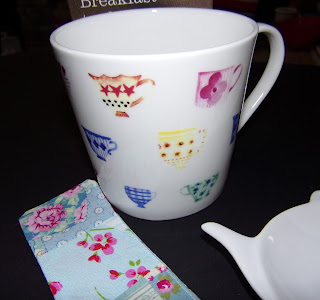 Sandra had asked for a mug (as I had too) and I found this one with pinks and purples and cups on it. 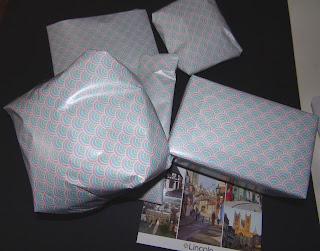 Here were the gifts ready to be securely packaged up.  It was an incredibly straightforward exchange thanks to Stephanie's wonderful organisation (it must have been a mammoth task requiring military precision) and I really enjoyed taking part.
Posted by Ellie Foster at 12:35 18 comments: