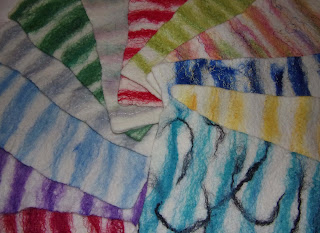 I have been finally getting round to making felt again and it is lovely!  I had forgotten how much I enjoy it.  It takes me two hours to make two pieces but I really enjoy creating the blends and deciding what colours I need to use.  I have reserved a table at a craft fair in November, so that has given me the push I need to start making again.  In the whole of last year, I think I made two pieces in total, so I am doing much better this year.  The stripy pieces are destined for the craft fair, but you'll have to wait until then to see what I make them into.  I am also going to make some other coloured pieces - pink and a pastel green and whatever else takes my fancy.
I now need to replenish my stock of white wool for the base pieces...it's a good job I have just been paid!
Posted by Ellie Foster at 16:17 6 comments: 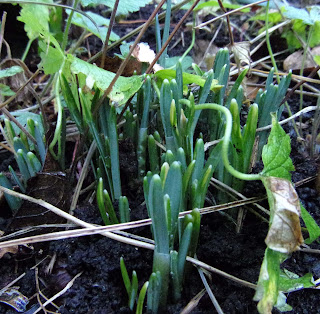 In a rather dull and grey winter, it is always cheering to see signs of growth and the promise of Spring.  While winter can be lovely when it gives blue skies and wintry sunshine, the dull days can seem very long.  I was in the garden and noticed the snowdrops starting to poke their heads up. It won't be long before they are in flower. 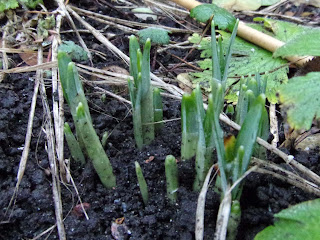 Another little clump in the garden. 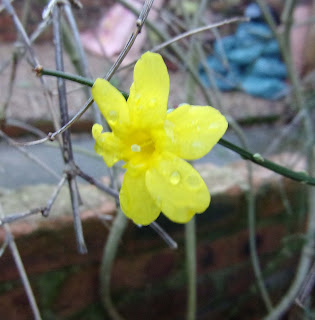 A very welcome splash of yellow is provided by winter flowering jasmine, with its straggly stems.  The flowers do make up for its untidy habit. 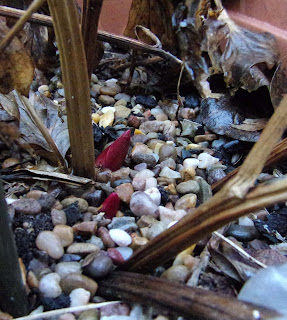 I also found the noses of one of my patio peonies (I think this one is 'Athens') with the promise of beautiful flowers in late Spring/Early Summer.  This is a really encouraging sight.
I have also just bought a rhododendron 'Tinkerbird' which is meant to be happy in a pot as it is a dwarf variety.  It is supposed to be very hardy, having been bred in Scotland and is also said to have a jasmine scent in May.  My plant is looking healthy and has lots of buds.  I will let you know how I get on with it.
Posted by Ellie Foster at 16:47 8 comments: 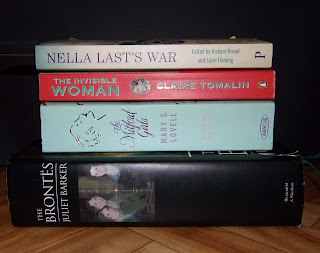 My latest reading has been a little eclectic, but then that seems to be par for the course.  Before Christmas I started on a couple of Miss Marple books on my Kindle - Nemesis and Sleeping Murder - partly because the Joan Hickson adaptations were being shown, so I wanted to read the originals and because those are my favourites so far. Joan Hickson was perfect casting for Miss Marple, right down to her twinkling eyes!  Since Christmas, I have continued with The Murder at the Vicarage, The Thirteen Problems, The Body in the Library, The Moving Finger and A Murder is Announced.  Although I had some inklings about who the murderer might be each time, (I was usually wrong) Mrs Christie managed to bamboozle me and I missed lots of clues. On my Kindle at the moment is Pride and Prejudice.
However, I have also got 'real' books which I have either started or am going to.  I usually have a few on the go at any one time.
So, in the photo, there is Nella Last's War (the Mass Observation Exercise diary kept by Nella Last and which Victoria Wood dramatised in 'Housewife, 49').  This brings home the way life had to go on during the Second World War, with rationing and managing on very little.
There is also The Invisible Woman which I was inspired to read following a film of the same name which I watched last year.  This is the story of Ellen Ternan and her family; she was involved with Charles Dickens but was 'invisible' to society.  So far, it is fascinating and presents an interesting picture of the lives of Victorian actresses and how they were thought of/treated. 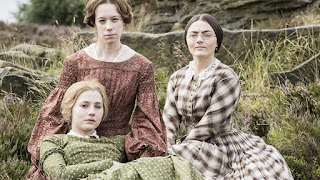 ('To Walk Invisible' photo from http://www.bbc.co.uk/programmes/)
The Brontes is a very good biography of the whole family which I bought back in 1995 and have read several times.  I watched 'To Walk Invisible' over Christmas which I really enjoyed and this made me want to read the biography again. (It is still available on iplayer for the next thirteen days to watch if you are in the UK).  'To Walk Invisible' was a dramatisation of the adult lives of the Brontes, following Branwell's downfall and the sisters' fame beginning to spread.  It was beautifully acted and set and Haworth looked just as I imagined it should.
Finally for now, there is The Mitford Girls which Mum bought me for Christmas.  I haven't started it yet but have looked at the photos.  With their connections, it should prove to be a fascinating story.
Posted by Ellie Foster at 18:48 10 comments:

A Frosty (but magical) Start 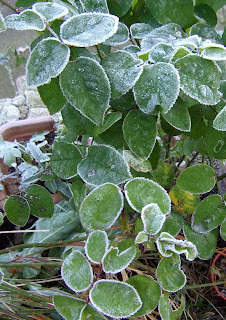 It has been quite frosty recently and some of the plants in the garden looked quite photogenic with a sprinkling of sparkle.  Above is a rose. 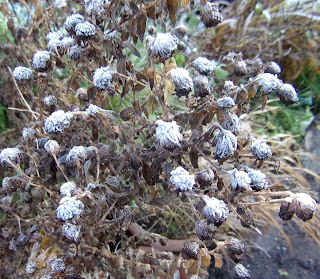 The flower heads of an aster looked as though they had been dusted with icing sugar. 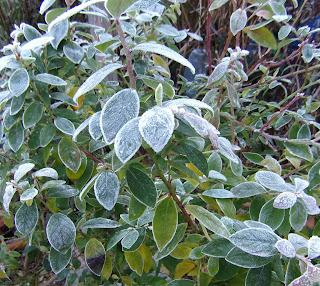 The two Blueberries, Blue Pearl, are hanging on to their leaves.

A miscanthus looked ethereal with its flowers highlighted. 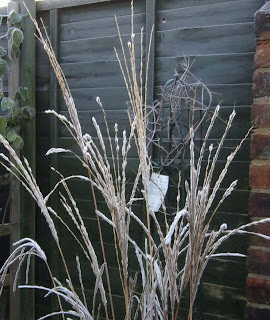 I have mislaid the label for this one, so am not sure which it is (Ferner Osten? Kleine Fontane?), but it stands beautifully upright. 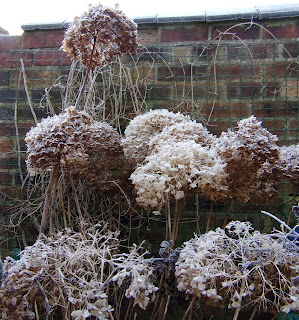 Hydrangea arborescens Annabelle looks lovely most of the time... 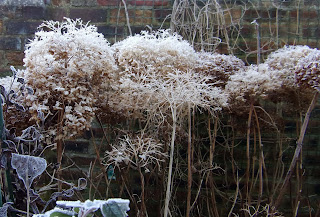 ...in winter, the flower heads show lovely variations in tones of sepia... 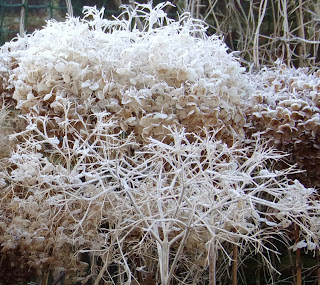 ...and look almost magical with the frost on them.
Posted by Ellie Foster at 19:57 4 comments: 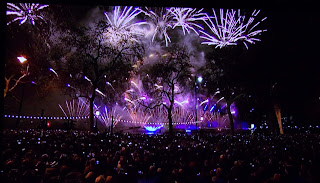 (Photos taken of the London fireworks last night/this morning from the TV - I was pleased with how they came out as it almost looks like I was there!)
As has become somewhat traditional for me, today is the day I review my aims for 2016 and decide on aims for 2017. 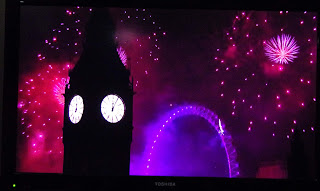 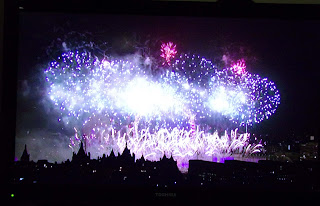 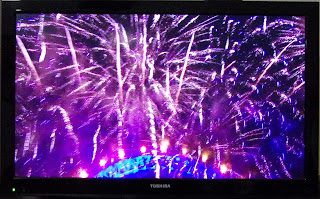 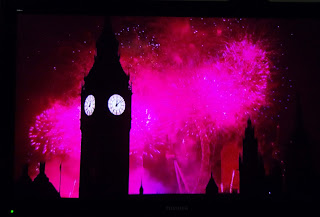 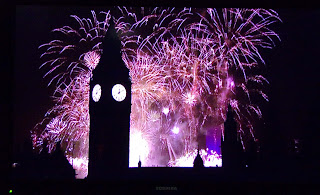 No new aims again, as the ones above still stand for 2017, so lots for me to go at there.
Happy New Year to you all and I hope it is a healthy, prosperous and peaceful one.
Posted by Ellie Foster at 22:43 4 comments: