Spring - just around the corner? 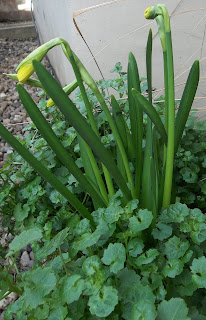 Here's a sight that cheered me up after the rather grey few days we have had recently.  Owing to the rather unpredictable winter we have had (mild, snow, freezing temperatures, spring-like temperatures, cold), I wasn't sure whether these daffodils had survived at all.  This pot is outside the front door and has had no extra protection during the winter. (I also needed a few subjects for my new camera too).  Nature shows how amazing she is again, as the cheerful yellow flowers unfurl. 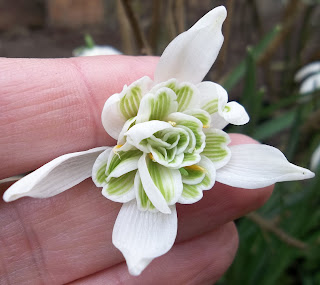 One of just a few double snowdrops in the garden looking rather gorgeous too.  Excuse my rather wrinkled fingers as I hadn't put any hand cream on before braving the cold. 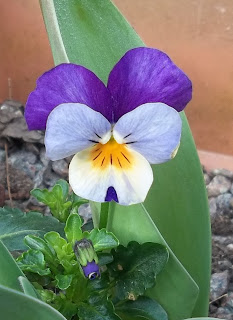 Another cheerful face of a viola, planted at the top of a tulip pot.  I did notice tulip leaves starting to push through, so that is encouraging.  I am desperate to get out into the garden; to prune the clematis, buddleia and roses and to tidy up the borders.  I notice new things every time I venture out and this gives me a feeling of optimism that spring is on the way.
Posted by Ellie Foster at 14:41 4 comments:

Snowdrops and other delights at Hodsock Priory 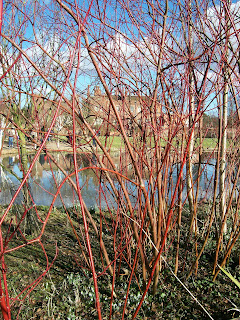 On Sunday I had my first garden visit of this year - my annual trip to Hodsock Priory.  The weather was perfect with crisp blue sky and lots of sunshine but with a cold wind too.  However, we were wrapped up warmly, so managed the walk around the woodland with no problems.  It was incredibly busy though, probably due to the decent weather, a craft fair in the grounds and the last day of half term too.
Above is a view of the Priory across the small lake, seen through the brilliant red stems of a Cornus (possibly Sibirica, but I'm not sure). 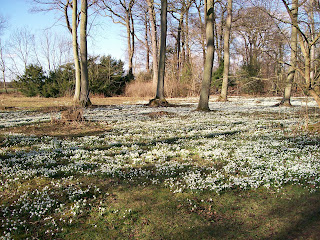 This is what Hodsock is famous for; the drifts of naturalised snowdrops all around the wood.  Despite there being so many people, there were quieter areas and we were able to enjoy the peace and listen to the birdsong, which was magical. 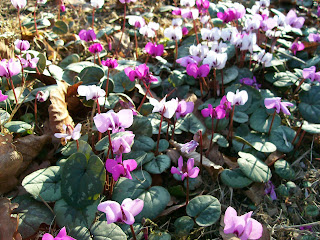 There were also areas full of Cyclamen coum with their delicate pink and white (and many shades in between) flowers.  They always give a lovely splash of colour. 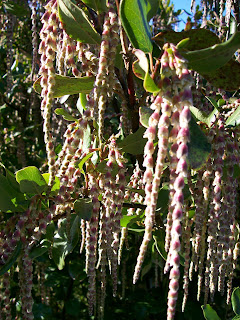 The elongated flowers of Garrya Elliptica (Silk Tassel Bush) are beautiful, especially when you get close to them. A very appropriate common name, I think, as they do look like they are made from silk. It was a lovely visit.
Posted by Ellie Foster at 20:23 2 comments: 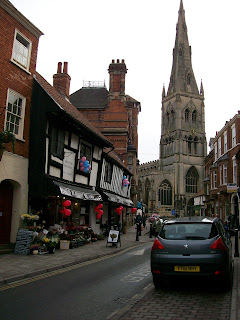 We had a day trip to Newark last week on the train.  Newark is a market town and has been an important stop-off for traffic going along the the Great North Road (or A1 as it is now known).  The good thing about Newark is that it has retained some beautiful Georgian buildings and it doesn't take much imagination to visualise the carriages stopping at one of the coaching inns that surround the market square.  Although these are now mainly shops, several have plaques explaining their importance in the past and mentioning famous people who stayed there, such as Gladstone, Lord Byron and Queen Henrietta Maria. 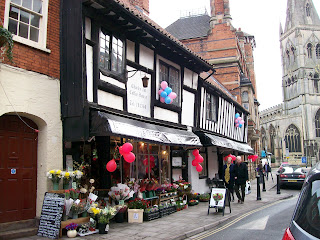 We stopped to have lunch at this quaint cafe, and inside we admired the sloping staircase and old doors.  This is where Queen Henrietta Maria was said to have stayed. 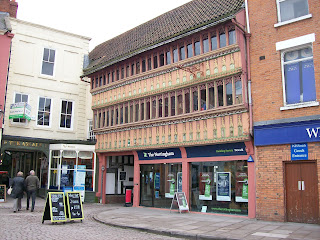 The frontage of one of the coaching inns - The White Hart.  Apparently, there are remnants of its history inside, but we didn't have time on this occasion to investigate. 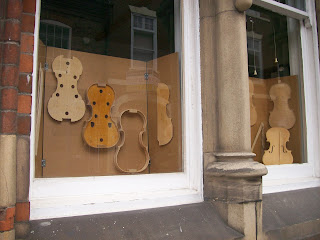 Newark also boasts a school of violin making and displayed violins in various stages of construction in the windows. 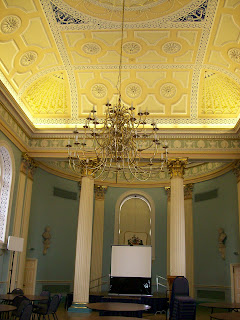 This beautifully decorated room was the Ballroom in the Assembly Rooms which also houses the Art Gallery and various rooms for the Town Council and the Mayor.  The decoration was restored and repainted in the 1990s and really helps to add to the atmosphere. 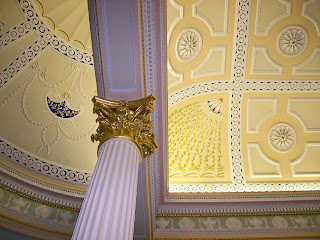 Beautiful friezes and plasterwork adorn the ceiling.  What a wonderful place to hold the Assembly Balls in Regency times.  If you closed your eyes, you could almost hear the murmur of voices, the orchestra tuning up and the swish of dresses...
Posted by Ellie Foster at 19:07 No comments: 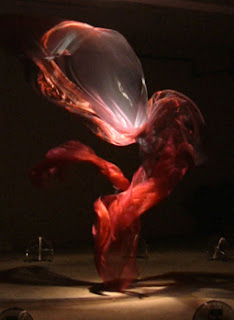 Browsing the internet, as you do, I found the work of an artist and sculptor called Daniel Wurtzel.  The amazing videos that you can see on his website were fascinating to watch.  There are desk fans placed in a circle which move the air and this causes the sinuous patterns in the material.  It really is relaxing to watch but also magical.  In the one above, called Pas de deux, it is hard to believe that it is just material and air that you are watching. 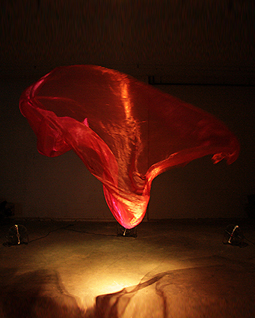 This one has one piece of material and is called Magic Carpet.  Both of these are worth a look. The link to his website is:
http://www.danielwurtzel.com/air.cfm
Enjoy!
Posted by Ellie Foster at 18:56 No comments: 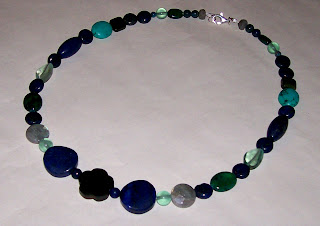 ...lots of things, but making jewellery is definitely one of them.  I have been experimenting with some chunkier designs and am gradually starting to use my 'stash' to make into necklaces, bracelets and earrings.  The one above was made using labradorite, lapis lazuli, fluorite, shell, turquoise, blue/green jasper and a wooden flower as the centre bead.  Due to the labradorite and fluorite, it does sparkle in the right light and it certainly adds interest to a t-shirt and cardigan combination! 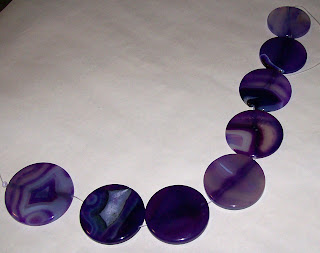 ...buying new gemstones and designing new jewellery.  Above are some purple dyed agate circles which are going to become pendants, with only a few other gemstones (amethyst mainly) around them and the beading wire plaited.  They have the most beautiful patterns on them and it seems a shame to detract from the patterns,  so I shall only add details to the plain coloured ones.  I'm really looking forward to getting started.
I am pleased to say that the snow here has finally melted and the temperatures have finally gone up into the positives by day.  The poor garden is looking very bedraggled and sorry for itself, but hopefully, if we don't get any more snow, things will soon start to improve.
Posted by Ellie Foster at 16:58 2 comments: 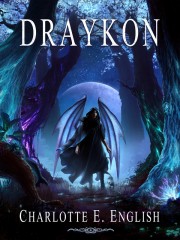 I have just finished reading this book, written by my friend Charlotte who has moved to the Netherlands.  It is the first of a series of fantasy novels and she is already working on number three in the series, as well as a new series and writing as part of an author group.  She is e-publishing the books and this is one of the reasons I felt I should get a kindle (as well as all the free classic books available, of course.)  Although this is not a genre that I have much experience of, I found it to be a pacy, well written and engrossing story.  There are two heroines, both of whom I really liked and their stories are told in parallel, following one, then the other.  Charlotte has followed in the great tradition of classic writers by moving between the stories and leaving the characters so that the reader is desperate to know what happens next.  She has created an amazing other-world with various regions and layers to it, peopled by various groups, which she describes with clarity and conjures up the sense of actually being there.  I am just going to have to read the next books in the series to find out what happens next.  (I have also read a preview of the first book in the new series and that is really interesting too.)  Thank you Charlotte, for encouraging me to move tentatively and painlessly into a different genre of reading!
The image above is from Charlotte's blog site: http://www.charlotteenglish.com/2012/02/03/why-im-tired-of-advice/  which is well worth a visit if you are the least bit interested in writing or reading.
Posted by Ellie Foster at 16:08 4 comments:

The First Snow of Winter 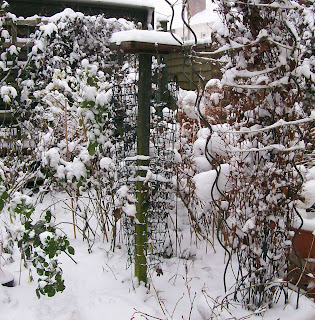 As with many parts of the UK today, here is evidence of the snow that fell on us yesterday afternoon and last night. Luckily, not as much as we had last winter which is a good thing. 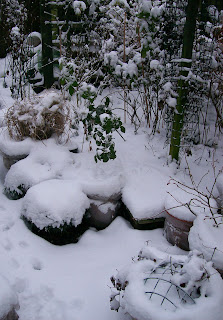 The cats had bravely ventured out as can be seen by their paw prints. The snow was a very good texture for snowmen or snowballs (as our next door neighbours demonstrated on the street this morning at 08.00!). 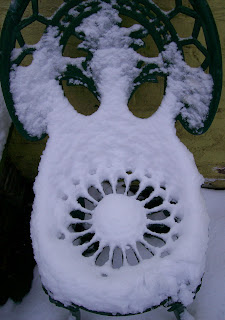 I liked the pattern on the chair - it looked a bit like the face of a cartoon dog. 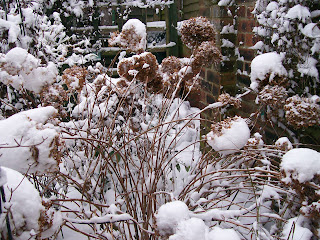 The world does become quieter and muffled when there is snow and there is no doubt that it is beautiful to look at, but if it freezes over the next few days and nights, it won't be quite so much fun.
I have been busy spending on the internet to cheer myself up - plants for the Spring, gemstones for now and a couple of books (one on felt, one on gardening).  Their arrival will give me something to look forward to over the next couple of weeks and months.
Posted by Ellie Foster at 16:21 2 comments: 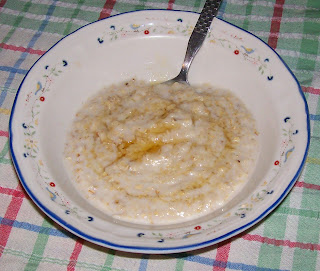 The winter has finally arrived with a vengeance.  We have had cold nights and cold days (not on a Canada scale of coldness), but certainly cold enough for me.  Now the snow is falling and I feel the need for comfort food.  The fire is lit, the cats are curled up and snoring or purring happily and I just have to have a bowl of porridge.  It really is perfect for making me feel all warm and comfortable.  I have to admit, I like my porridge made with milk and then swirled with golden syrup  - I am not sure how people manage it made with water and salt (ugh!).  I haven't made any plans to go anywhere tomorrow, so am settling down with comfort food, books and films. In my opinion, snow is best when it can be admired from inside a cosy house.
Posted by Ellie Foster at 17:49 No comments: