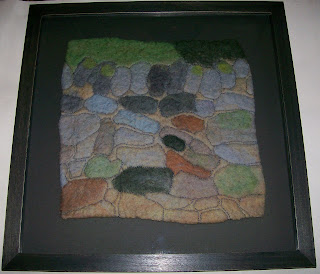 Above is a photo of the stone wall felt which I have had framed and am going to give to my mother in law for Christmas. I had initially thought it should be in a pale frame with a light coloured mount, but when I tried that at the framers, it looked awful! So, I went to the other extreme and chose a dark frame and mount which I feel highlights the colours much more effectively. It is in a box frame, which though more expensive, holds the glass away from the surface of the felt. Let's hope she likes it!
Posted by Ellie Foster at 11:05 No comments: 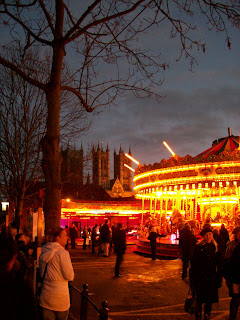 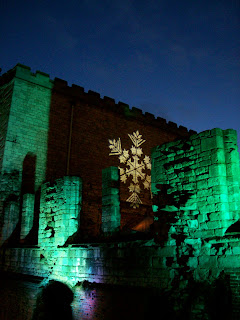 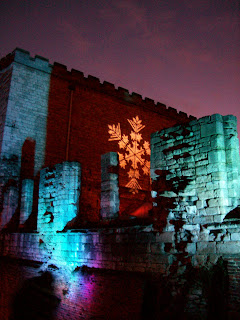 Above are some photos I took at the Christmas market last weekend. We went on the last day, assuming that if we timed it right, it wouldn't be so busy. Lots of other people had the same idea, so it was much busier than we thought! I particularly liked the lighting effects on the Bishop's Palace wall. We didn't buy a lot, just a few new decorations. 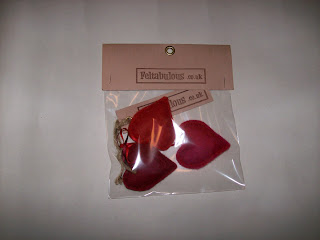 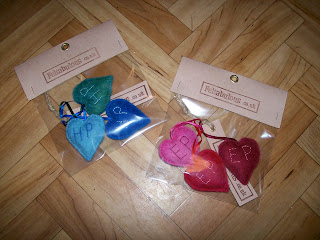 I have finished the orders for embroidered hearts and hearts in shade of red and purple which I was given at the Craft fair. I hope that they are what the customers wanted and that they are happy with the finished pieces. I had bought an air soluble pen to assist with the initials but unfortunately, it was like a ball point pen and did not work on the felt at all. In the end, I had to draw the initials on greaseproof paper and sew through the paper, tearing it away carefully once finished. There must be an easier way! Unfortunately, my sewing machine (clever though it is) can't do the complicated embroidery required for initials - I would probably need a top of the range one, costing around £1,000! Perhaps if I ever win the lottery...
I was happy with the finished items and I have completed them well before Christmas.
Posted by Ellie Foster at 16:42 No comments: