We went into the city to see the Steampunk Festival, as we did last year (see here).  It has been on since Friday and did seem to be a little quieter today.  It has been a glorious weekend with lots of sun, but I did feel sorry for those Steampunkers who had suits and long dresses. 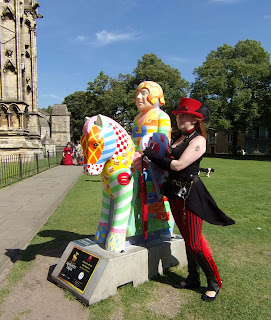 Here is our friend Rachael in her Steampunk inspired outfit, standing with the Knight that she painted in situ, right by the Cathedral.  He is, as predicted, very popular with children. 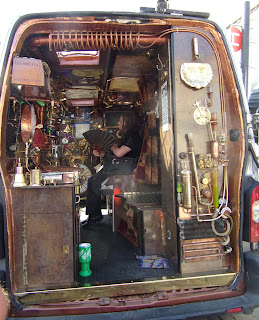 This Steampunked van was drawing lots of interest.

It has many interesting details. 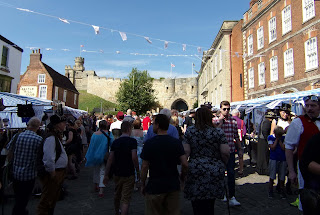 Although it was a bit quieter today,  there were still lots of people in Castle Square.

Usually, Steampunkers are very happy to stop and pose for a photo.  There is a rather cross looking fairy trapped in the cage.
Chris made a purchase of a rather smart coat, so it looks like we will be taking part next year (although I seem to remember we said that last year too.)  Hmm, now what character do I want to be?

Here is the weekend's timetable:  https://www.asylumsteampunk.co.uk/timetable/  - there were lots of activities to take part in.
For some more photos, click the link: http://thelincolnite.co.uk/2017/08/in-pictures-weird-and-wonderful-costumes-at-lincoln-asylum-steampunk-festival-2017/
Posted by Ellie Foster at 17:22 4 comments:

Recently, I have noticed some rather intriguing coincidences happening in my life.  One happened a few weekends ago, when Chris and I were looking at used books in various charity shops.  I bought three books, each from different shops.  One was Lady Audley's Secret (1862) by Mary Elizabeth Braddon, which had been on my radar for a while as it is a Victorian murder mystery and I had seen it mentioned on other blogs. One was The Suspicions of Mr Whicher or The Road Hill House Murder by Kate Summerscale and is an account of a true-life Victorian murder.  I was also aware of this as I had seen the TV adaptation. The final one was Desperate Romantics by Franny Moyle, about the Pre-Raphaelites, which I approached with caution as I didn't like the TV series based on the book.  However, I felt that if I hadn't read the book, I was in no position to be critical of it, or the series.  So, three books, all based in Victorian times. 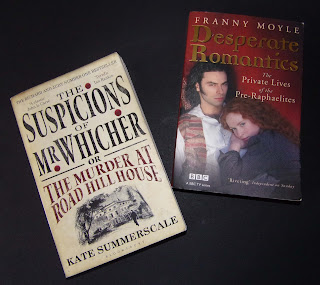 (You will notice that Lady Audley's Secret is not in the photo above because I have lent it to a friend to read.)
Once I began reading, I noticed that the books were all linked.  In Lady Audley, there is a description of a painting of Lady Audley, by a Pre-Raphaelite artist (unnamed), which becomes important. 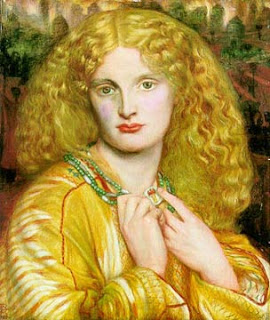 The painting above is of Helen of Troy by Rossetti with Annie Miller as the model, but the description of the colouring of the model in the fictional portrait does make me think of this one. This image can be found here.
There is also the possibility that a facet of the character of Lady Audley was based on one of the family involved with the Road Hill murder case, Constance Kent.  The first actress to play Lady Audley on stage was Louisa Ruth Herbert, who became a muse for Dante Gabriel Rossetti during 1858 -9. Here's what he wrote about her:

"I am in the stunning position this morning of expecting the actual visit at 1/2 past 11 of a model whom I have been longing to paint for years – Miss Herbert of the Olympic Theatre – who has the most varied and highest expression I ever saw in a woman's face, besides abundant beauty, golden hair, etc. Did you ever see her? O my eye! she has sat to me now and will sit to me for Mary Magdalene in the picture I am beginning. Such luck!"
The author Mary Elizabeth Braddon said Louisa Ruth Herbert gave her favourite performance as Lady Audley. 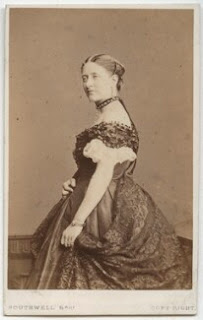 Here is a carte de visite of Louisa Ruth Herbert in 1865. 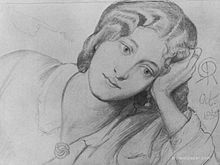 Here is a pencil sketch Rossetti did of her in 1859 from wikipedia - there is a hand to the left of the picture with the word 'stunner' beside it - Pre-Raphaelite slang for a beautiful woman.  Of course, she appears in the book Desperate Romantics (which is much better than the awful TV series made from it).
Then on Friday, I was reading blog posts that I follow and on Pre-Raphaelite Sisterhood, appeared a post all about - yes, you guessed it - Louisa Ruth Herbert!  There was also a link to another blog, The Kissed Mouth, with a post all about her, including some photographs of her, showing that she really did look like Rossetti's drawings.
So what does all this mean? Well, it could just be one of those things - as there is an obvious link through Victorian culture.  However, I like to think I was meant to buy and read the books and remind myself of Louisa Ruth Herbert too.  (She and I have a connection of about thirty years, as I also used the black and white drawing of her as the basis of part of an A level art work, many years ago...spooky!)
Posted by Ellie Foster at 17:38 4 comments: 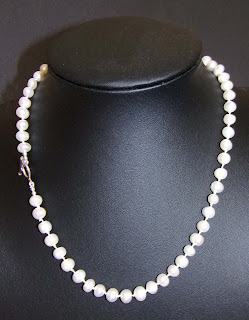 My best friend who lives in Canada had a big birthday at the end of July and I knew that I wanted to make her a proper, hand knotted pearl necklace with sterling silver findings.  I gathered everything I needed; pearls, silk thread, sterling silver toggle clasp, sterling silver beads, sterling silver french wire and watched many a video on the internet as well as consulted books on the subject.  I decided to use a pair of jewellery tweezers to help with the knots as I felt this looked the most user friendly way to choose.  I stretched the silk thread the day or so before starting in order to lessen the stretch once the necklace is worn.  It took an afternoon to do the knotting and threading, after a couple of false starts and a few choice words.  I was really pleased with the end result. 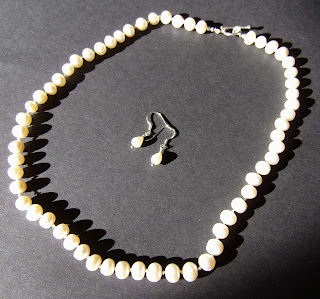 I duly sent the jewellery off, but as sometimes happens, circumstances conspired against me and the parcel's progress went a bit quiet.  I had sent it with tracking and signed for, to try to ensure it arrived safely, but after a good fifteen days, missing my friend's big day (bother), it hadn't arrived and I was more than a little worried.  However, when I checked the tracking progress again, it suddenly reappeared and my friend has now received it.  She left me a lovely phone message and I think she liked it! 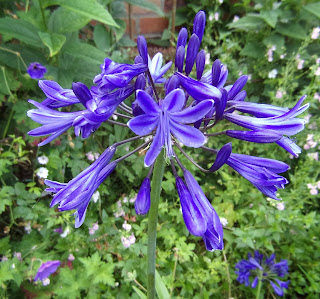 The garden is slowly starting to show its late summer colour - this year, the dominant colours are blue/purple/lilac, thanks to the agapanthus, clematis and hibiscus. 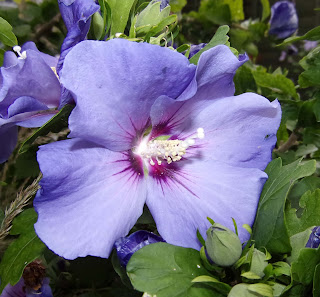 One of my favourite plants for July/August is Hibiscus Syriacus 'Oiseau Bleu/Bluebird' which has the most exotic looking flowers and which has flowered brilliantly this year.  It is always featured on my blog. 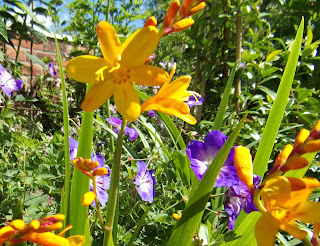 However, to offset all the pastels, I have enjoyed seeing the crocosmia (here, it is 'Columbus') unfurling, with the rich yellows and oranges providing a lovely hit of colour.  Lots to enjoy in the August garden.
Posted by Ellie Foster at 16:47 6 comments: 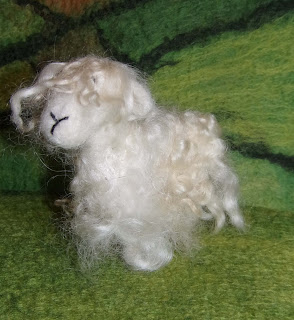 I have had some time off work and have managed to complete two projects.  I have made another needlefelted sheep, based on a Lincoln Longwool sheep.  I think I have improved on the way the head attached and placed, so it is a matter of more practise. 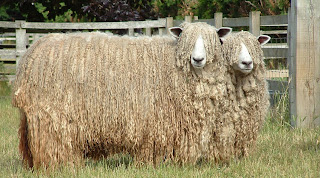 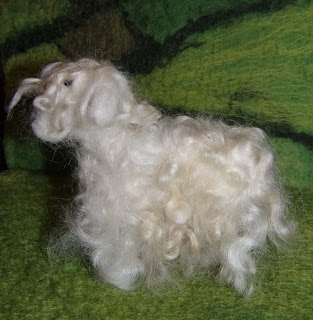 I used Lincoln Longwool fleece to add the curls. 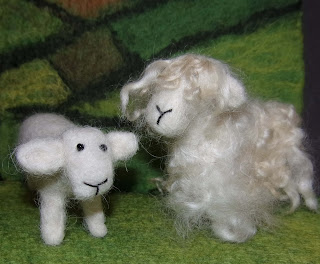 Here are my first two sheep together. The start of a little flock, I think. 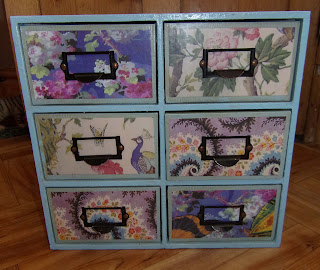 My other creative endeavour was to upcycle this card index unit.  The unit had been sitting under my table with nothing in it for a long time and I decided it would be perfect storage for Blockwallah stamps.  However, it was covered in a dull, ugly brown textured paper, some of which had come off.  So, out came the emulsion paint (the same shade I used on my paper storage unit.) 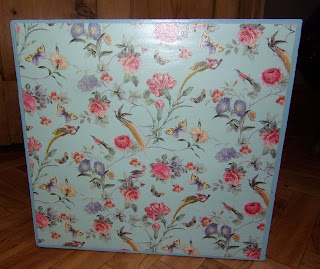 I covered one side in this lovely paper (which has glitter in it)... 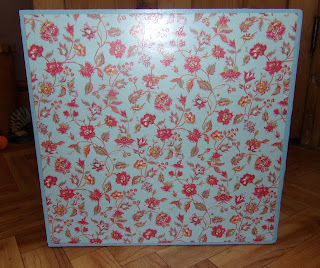 and the other in this (being very pleased with the way it complemented the paint). 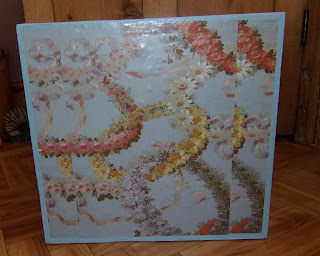 The back got a makeover too... 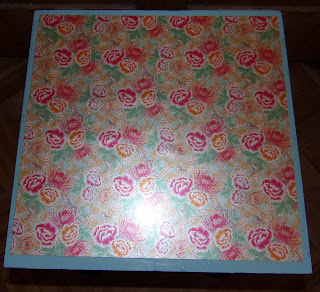 As did the top.

For the drawer fronts, I used the same papers as I had used for the paper storage unit.  I think it is a huge improvement and am really pleased with how it looks.  I have lined the drawers with remnants of oilcloth as the stamps have been oiled and this can mark some surfaces.  My pretty card storage index now has a new lease of life on my shelves.
Posted by Ellie Foster at 20:23 6 comments: