More stars of the garden in June 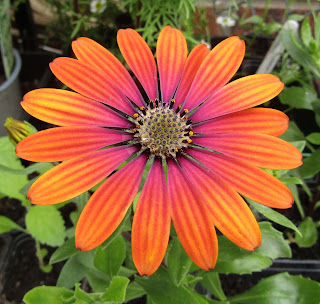 While the roses are always the stars of the June garden, here are some others which are bringing me joy at the moment.  Above is osteospermum Erato Purple Glow which is such a splash of colour. 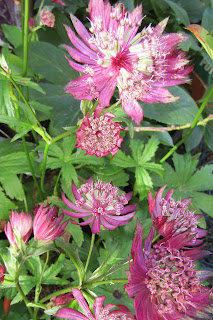 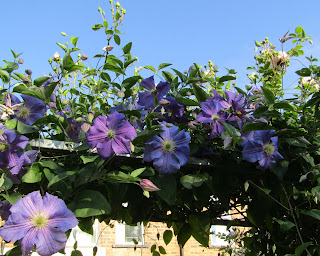 Clematis Perle D'Azur which has grown over the arch and is rapidly approaching the bathroom roof, in an attempt at garden domination. This clematis took a while to get going but is absolutely stunning this year. 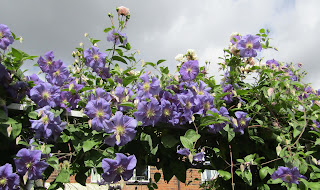 There is a rose under there too - New Dawn. 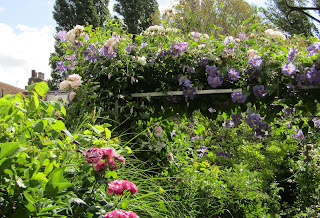 Here's the view from the other side.  The pink striped rose in the foreground is Ferdinand Pichard.

A 'new to me this year' salvia, Cerro Potosi, which has cerise flowers that are almost neon.

This foxglove 'Apricot' was planted in the shadier border and has been beautiful.  I grew it from seed and am so pleased to see it looking so good.

I have enjoyed watching the flowers open and the bees have certainly liked it too. I need more of these in the garden next year...definitely.
Posted by Ellie Foster at 14:49 12 comments: 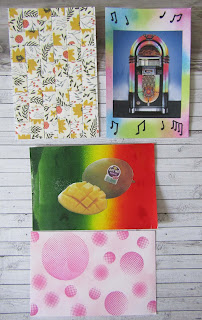 Week three of this challenge is done  - the time is going fast!  Above there is (from top left): Mix and Match (I did some paper weaving); Jukebox; Mango (with a gel print background) and Bitmap or Half Tone. 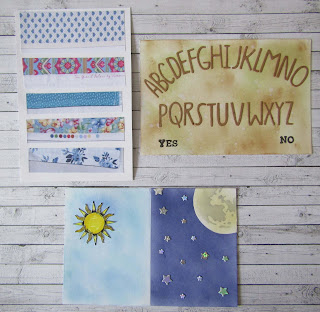 Here is Selvedge (I scanned some of my material stash into the computer) ; Ouija Board and Solstice.  Again, all pretty literal interpretations, but enjoyable to do nonetheless.
Posted by Ellie Foster at 09:42 6 comments: 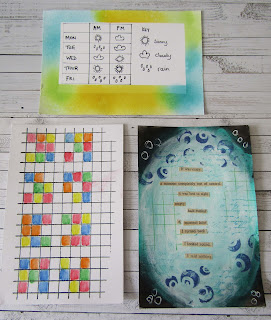 Week two of the challenge and from the top there is Pictogram; Rubik's Cube and Found (in my case, I made some found poetry from my go-to book, which seems to have just what I need every time, The Trojan Horse by Hammond Innes).  I have been using distress inks, watercolours and acrylic paint this week. 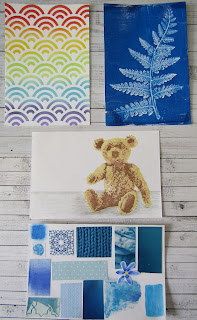 Top left is Rainbow; Cyanotype or Blueprint (I chose to do a faux cyanotype using my gel plate and a fern leaf from the garden); Toy (layered Teddy stamp) and Mood Board (I used scraps from my collage box and was pleased to see all the different blues.)  I really enjoyed the found poetry, the cyanotype and mood board from Week two.  On I go!
Posted by Ellie Foster at 13:32 8 comments: 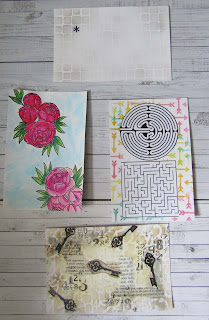 The Index-Card-a-Day challenge is on again.  I have taken part for the last two years and have enjoyed creating a small piece of art every day during June and July.  There are daily prompts, but it is up to you whether to use them, or whether to go your own way.  There are also guides to materials you may like to use.  The challenge is run by Daisy Yellow Art.  Above from the top are Asterisk; Peony; Maze or Labyrinth; Key. 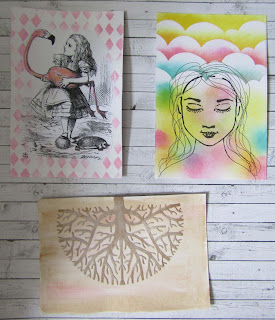 Above are Flamingo or Pink; Daydream and Root.  I often seem to be quite literal with my interpretation, but again, this is up to you.  The cards to work on are index cards or pieces of card 6x4 inches in size. So far I have used inks, watercolours, stamps, stencils, dies and images from the internet.  This challenge is also really good for making me use what I have.

I will post weekly so that there aren't too many posts to wade through.  How about joining in?  It's not too late! 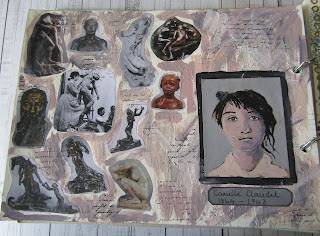 The art journaling course continues and I am learning a lot about the different media.  This block was about artists' acrylics, which are highly pigmented, generally consistent with colours throughout different ranges and heavier bodied. We began by colour mixing with a limited palette and then focusing on a female artist who was overlooked during their lifetime (there are many to choose from!) I chose Camille Claudel, a pupil, muse and lover of the sculptor Rodin.  She had a terrible life, Rodin leaving her, her father dying, she had a breakdown and then her brother had her committed to an asylum for the remaining thirty years of her life.  She wrote to him to ask him to get her released, but he didn't.  She now has a museum in France dedicated to her work.  We had to paint three quick portraits of our chosen artist, choose the one we liked best and work on it, then create a page. 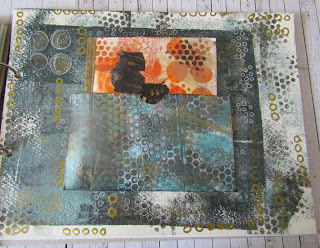 Week sixteen where we created a gel plate printed book and made a stamp using foam letters which we incorporated into the pages in several places. We also made collage paper to add to the pages. 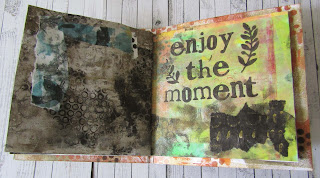 My stamp was 'enjoy the moment' and my book ended up being really grungy! 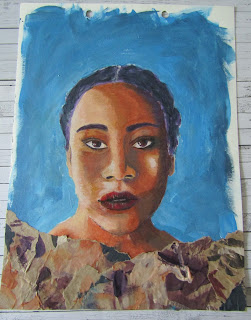 Portraits for week seventeen was not a week I was particularly looking forward to as I find faces difficult.  However, we were given a step by step lesson and encouraged to use a 'Posterise' app or Photoshop effect to show the different areas of light, medium and dark.  While we were encouraged to use a self portrait, there was no way I was going to do that, so instead, I chose a face from a royalty free photo site.  It is probably the best portrait I have painted and I did enjoy painting it, but not an area I particularly want to explore. However, it is good to know that I am slightly better at it than I thought.  The paper we wiped our brushes on became part of the portrait, which was a nice touch.

I much preferred week eighteen where we layered colours with white or black.  My patterns went rather curvy and organic, but I went with it! 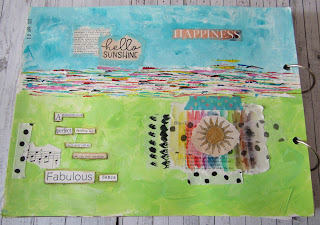 I loved week nineteen where we chose a song and added words and images. My song was 'Walking on Sunshine', a really happy song by Katrina and the Waves from the 1980s. 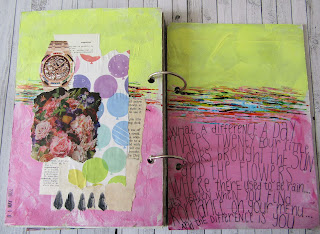 We were encouraged to make a second page where we created a collage on the left and wrote out some of the song's lyrics on the right. This time, it was 'What a difference a Day makes' by Dinah Washington. 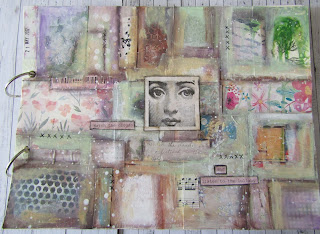 Week twenty was all about the layers - creating a patchwork of collage and adding acrylics to bring some of the pieces out and fade others into the background.  It took quite a while to build up as we had to let layers dry.  We were encouraged to add words and I wasn't going to, but noticed I had stuck a piece of collage paper with writing which said 'we watched the clouds...and listened to a lullaby' (it was from a digikit of diary pages) right in the middle off the page (serendipity in action once more), so they became my focal words. 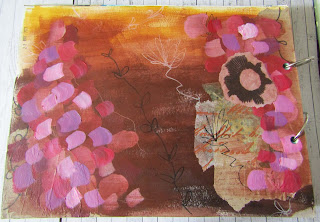 Abstract botanicals was the focus for week twenty-one, where we layered up petal shapes and knocked them back using layers of translucent acrylic. I added an image of a mushroom gill print which my colleague from work had been making and kindly sent to me for collage.
Again, I learnt a lot about acrylics and how they can be used. The next seven weeks are focusing on Craft acrylics - should be interesting!
Posted by Ellie Foster at 10:22 14 comments: 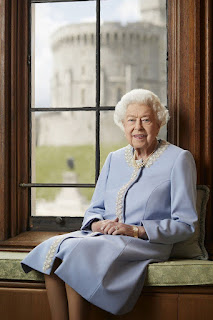 (photo from here)
I couldn't let the opportunity pass without offering congratulations to Queen Elizabeth II on her Platinum Jubilee.  She is the longest serving monarch we have had in the UK (seventy years) and she has been dedicated to her duty all that time. 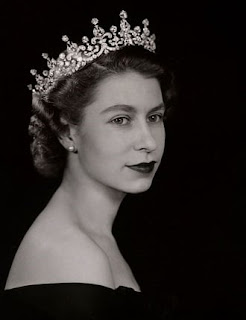 (photos from here)
If you are celebrating with a street party or some other party, have a lovely time.  If not, enjoy the extra bank holiday and the weekend.
Posted by Ellie Foster at 10:08 8 comments: