The autumn leaves...and other autumn images in the garden 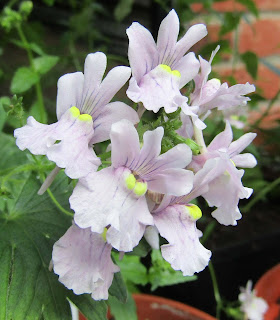 Last Saturday afternoon I went in the garden to prune some of my Climbing Roses.  I noticed that my first ever successful cuttings (of Nemesia Confetti) were still flowering away happily.  The photo above reminds me a bit of this... 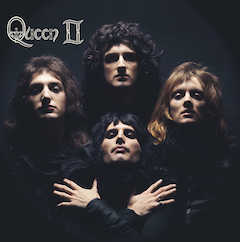 (Image from  http://www.queenonline.com/music)
Anybody else see that? No? Just me then...  moving swiftly on... 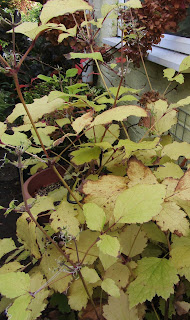 Leaves are changing quickly now and the clematis Wyevale is turning a lovely yellow. 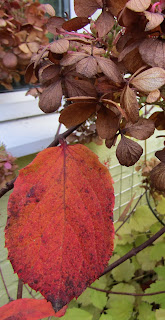 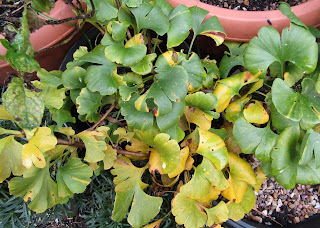 Ginkgo Mariken is starting to turn yellow too. 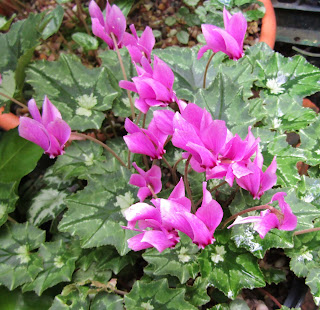 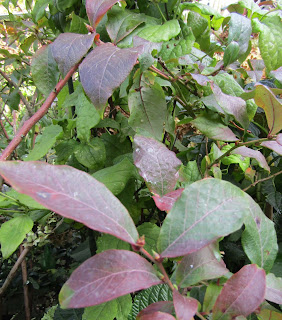 The blueberries are just starting to change too but will become more fiery as the temperature drops. 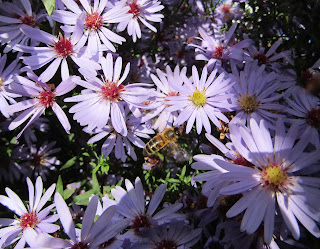 Autumn stalwarts such as this aster Little Carlow are still in bloom. 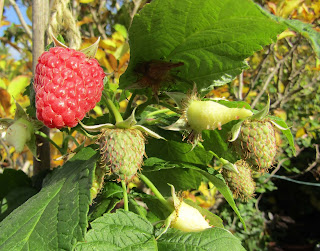 My autumn fruiting raspberries are giving me a few berries ever now and again which I eat as I wander round the garden.  I need to repot them next year and look after them a bit better. 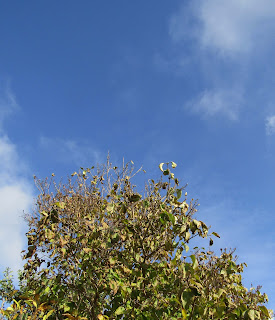 There are the most lovely blue skies to enjoy sometimes too... 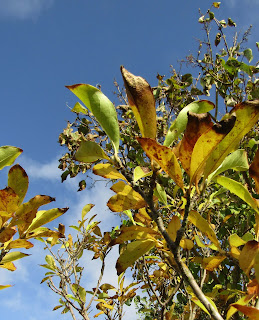 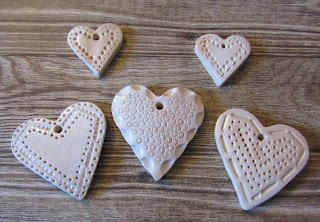 Back in March 2020, before the world changed, the powers that be at work decided we should have 'Wellbeing Wednesdays' all through March.  Lots of different activities were on offer, for both students and staff and I signed up for ceramics/pottery, which was an open session over lunchtime.  I went with a colleague and we had a great time.  She made a vase, while I started off smaller with some decorations, using biscuit cutters.  We added any patterns we wanted and then returned the next week to glaze them.  The lovely art technician had fired them in the intervening time.  I decided on white or clear glaze for the hearts... 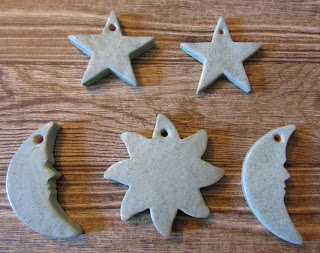 ...and the most gorgeous blue/green glaze for the sun, stars and moon, (which is much nicer in real life than the photos would have us believe) which I had left unpatterned.  This was my first attempt at glazing and the gentle painting activity was very enjoyable. 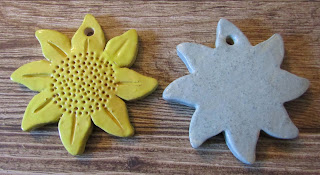 I made one sun into a sunflower, which had to be yellow, of course.  These were then fired and given back to me.  Buoyed with my success, I planned a more ambitious project of a ceramic running hare, with impressed patterns on it and glazed in white, blues and greens.  I had also planned to make some gemstone dangles to add to it. I worked diligently on the design and found the stamps to make the patterns.  I turned up to work, looking forward to that day...only to find the campus was being closed, we had to gather our things and go home.  I have been working from home ever since. My hare remains in plan form and one day I hope to make it, but not at the moment.  I could make it in polymer clay, so that may be a possibility. 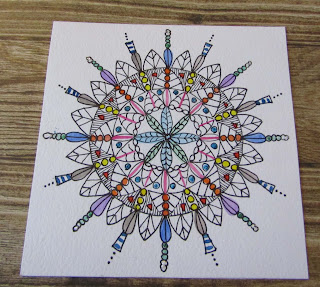 However, I have now started some of the activities from my Wanderlust 2021 course.  Above is a loose watercolour mandala design, which started out as circles drawn with a compass and just developed as I went along, after having watched a video.  I really enjoyed creating this as it was so meditative and just gently grew. I started off with the watercolour sections and then added the pen drawing a circle at a time. 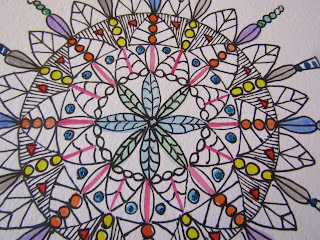 I added some glitter to a few areas.  I am going to make some more of these, I think, using some of my metallic gouache.
Posted by Ellie Foster at 16:04 12 comments:

The last rose of Summer and welcome Autumn 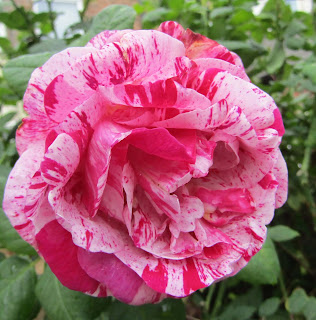 It has become quite autumnal fairly quickly, but there are still lots of plants in flower.  Above is Ferdinard Pichard who has been wonderful this year and has a lovely scent too. 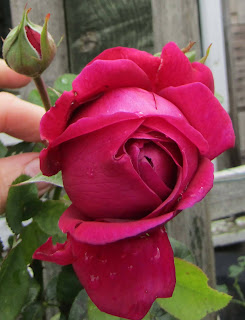 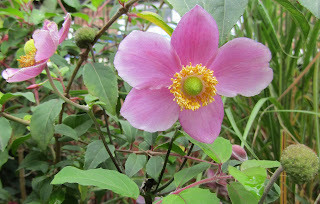 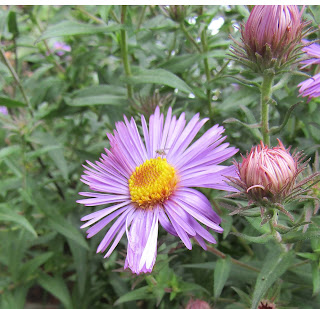 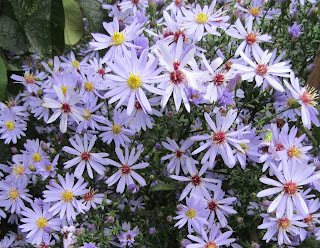 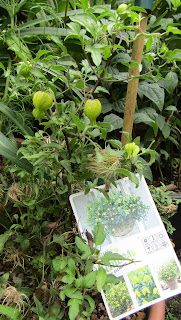 A new plant - Clematis 'Little Lemons'. I thought a small clematis I could grow in a pot with little lemon flowers would be a great addition to the garden, so here it is. 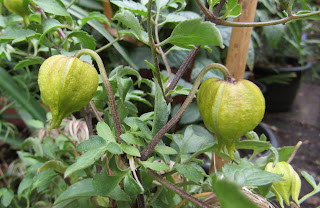 There are seedheads and flowers on this plant, so I hope it will do well for me and be happy.

The buddleia is still flowering for those insects who are still flying to collect nectar. 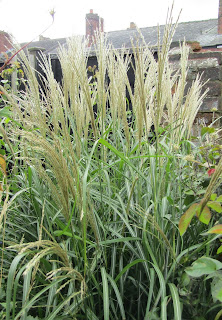 Miscanthus is looking elegant and dramatic, as it does every year.  If I had a bigger garden, I would have more of these plants.  Welcome to Autumn, with its changing leaf colours and gradual slowing down of the garden in readiness for Winter.  There is still a lot to enjoy.
Posted by Ellie Foster at 12:54 8 comments:

The first of another month and here is my ATC for October.  I used gel prints which I tore up for the collage background in shades of reds, oranges and yellows.  I then stamped pumpkins over the background.  I decided to go with a vintage pumpkin image for the main focal point (which I found at The Graphics Fairy  - a wonderful resource with free images although you can pay and subscribe for more options, should you wish to). 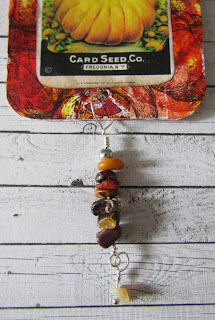 The gemstones have a suitably autumnal feel too, with dyed shell, garnet, red agate, mookite, smoky quartz, tiger's eye and more mookite.  The gemstone for October is opal, so that is added as the charm. 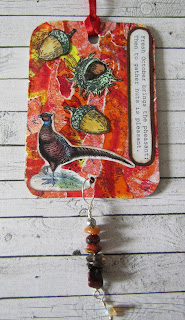 On the back of the card is another image from The Graphics Fairy, of a pheasant, with some stamped and watercoloured acorns and a conker.  This card does suggest autumn to me.