The Art of Dress 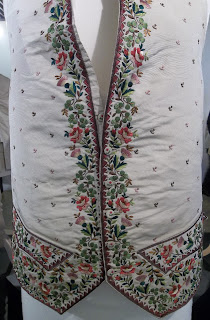 Two weekends ago, Chris and I went to our local museum and art gallery  to see an exhibition called The Art of Dress: 18th Century Frocks and Finery.  The main exhibit in the exhibition was a dress from 1735. However, there was also a collection of beautifully embroidered gentlemen's waistcoats which I was intrigued by.  They were so elegant and colourful and ranged in date from 1740 to 1780. I asked permission to take photos and this was fine as long as I didn't use my flash.  Some of the photos are a little blurry, but they give you the idea. 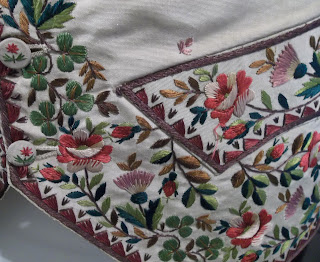 The colours of this embroidery have stayed really vibrant. 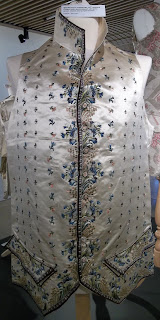 More gorgeous embroidery in shades of blue and brown.

Metallic thread has been used on this one to give added sparkle. 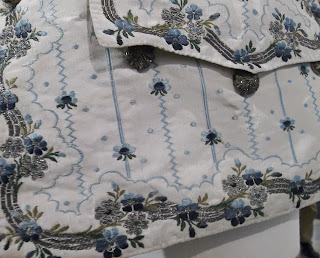 Even the buttons were sparkly. 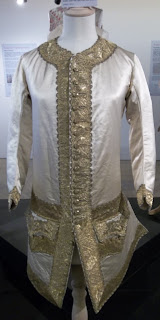 This jacket made of cream silk with gold embroidery and braid dates from 1740. 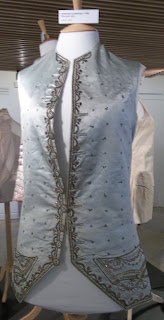 A pale blue/green waistcoat from around 1780. 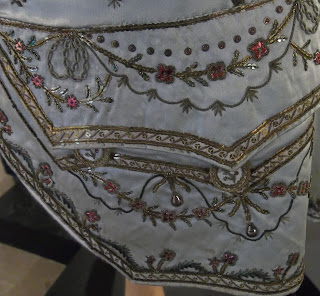 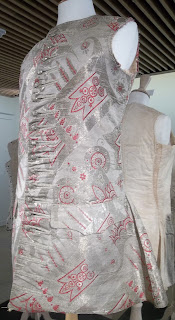 This silver and pink cotton waistcoat with silver metallic thread running through it had an exotic look and the braiding on the front reminded me of military braid.

A close up of the shiny material. 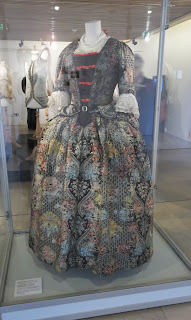 Here is the star of the show - a mantua dress from 1735, made from black Spitalfields silk, which is extremely rare. The mantua style originated in the late 17th century as a coat-like garment called a banyan.  The word mantua comes from the french for coat - manteau.  This dress has been conserved and restored by a specialist textile conservator in Stamford.

The dress would have had hoops or panniers made from cane or linen to support the skirt.  These varied in size as fashions changed, but in the 1740s-1750s, the hoops were as wide as 1.5 metres, which meant ladies had to go through doors sideways!  There was evidence that the skirt had been give an extra panel at the back at some point, and the material used was a blue and white checked material, which would have been hidden beneath the train.

A chemise, which was a simple tunic made from linen or cotton, would have been worn under the dress and then a corset would have gone over the chemise. 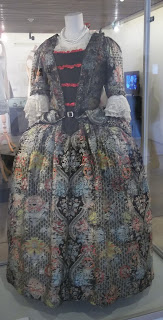 The mantua was open at the front and a v shaped separate piece of material, called a stomacher, would have been sewn or pinned in place. 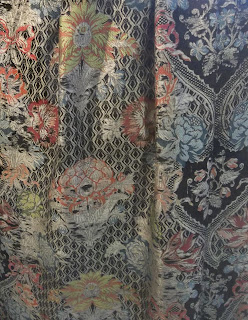 A close up of the very detailed pattern on the silk.  By the 1760s, mantuas were only worn at court and by the 1820s, hoops were no longer required to be worn by the court ladies.
﻿

Another lovely example of floral embroidery on a waistcoat. 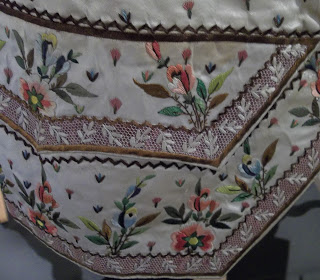 What really surprised me was how small these waistcoats were - I don't think many men today would be able to fit in them.  Of course, these garments were for people with money and probably only worn for special occasions, which is perhaps why they have survived in such good condition. I really enjoyed this exhibition, which also included shoes and accessories such as fans. It makes me wish that we were still this elegant now...