At last - we have a wall again! 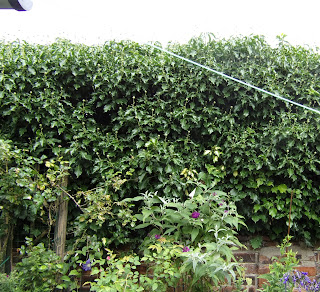 Last August, we had a bit of a disaster, when our lovely Victorian brick wall fell down, after having a lot of ivy taken away from it.  I posted about that here. 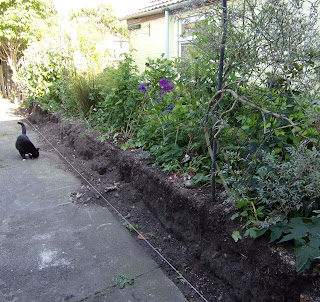 After a few false starts, we had a bricklayer recommended to us and he duly came along and had a look at the site.  I was most concerned that my plants would all have to come out, as the long border had the brick wall as its back.  However, I was assured that all would be well.  The foundations were dug out one weekend, and it was very hard work.  Above is the view before the foundations were dug. 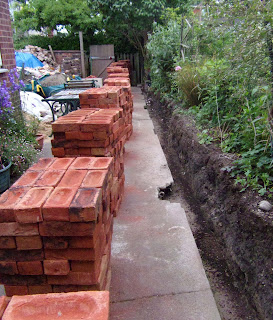 The foundations were laid and the following weekend, work started on the wall. The little indentation in the concrete is where one of the ivy roots was. 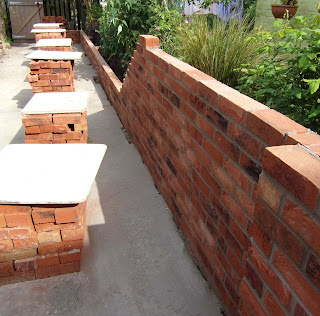 It was really exciting seeing the wall starting to go up again.  We had a choice of one brick as we needed something which was double faced and we found that most bricks aren't.  We were replacing like for like, or as near as we could, so that it didn't look too out of place with the rest of the garden walls. 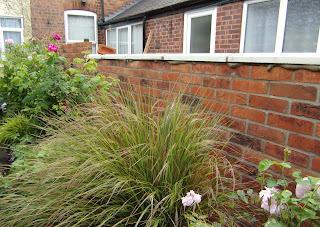 This photo shows the concrete coping going on (it has all been finished now and looks great).  My plants are enjoying having some support again and I even have a little bit of extra planting area at the back...(but won't be planting ivy!)
The bricklayers and foundation diggers did a marvellous job and we are really pleased to have a wall back again. *edited to add... I totally forgot to say that Chris worked incredibly hard through one of the hottest weekends of the year, backfilling the foundations area on our side of the wall, clearing out bricks and rubble and filling a huge skip.  He was an absolute star and a huge well done to him.
I will post some more photos once I have decided which plants are going in!
Posted by Ellie Foster at 16:55