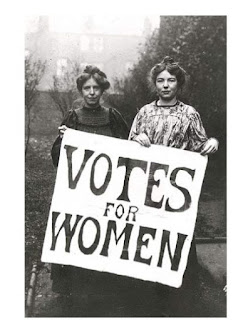 Annie Kenney and Christabel Pankhurst - photo from wikipedia
One hundred years ago today, women in England (over thirty years old, who met the criteria of owning property) were given the right to vote.  It was something to be celebrated, but it took another ten years for women to received the same voting rights as men.
I watched the recent-ish film 'Suffragette' starring Cary Mulligan, Helena Bonham-Carter and Meryl Streep at the weekend and thought it did a good job of showing the difficulties that women (and the men who supported the Suffrage movement) underwent.   Some women were force fed in prison and there are some harrowing accounts here of the brutal treatment this was.

Every time I exercise my right to vote (and I always do), I am grateful to these amazing women who stood up to the government and made their voices heard.
There are many events all round the country as part of the #Vote100 campaign.
I hope that the many women all over the world who still need to make their voices heard can be inspired by the suffragettes.
Thank you to all of the women and their male supporters who enabled us to vote.
Edited to add: Channel 4 have created a thought provoking advert for the #Vote 100 campaign - the link to youtube is here
Posted by Ellie Foster at 20:42