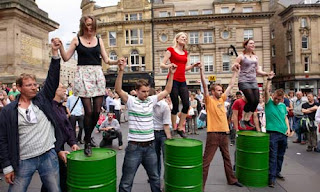 Got their clogs on ... (left to right) Tiny Taylor, Laura Connolly and Fiona Bradshaw perform clog dancing in Newcastle. Photograph: Stuart Wood/BBC
Clog dancing - not my usual train of thought for my blog. However, I was totally transfixed by the programme on BBC4 last Friday night; 'Come Clog Dancing', where Charles Hazlewood, the noted conductor, attempted to get a flash mob style clog dance together in Newcastle. The dancing was fantastic, the music infectious and it was a real feel-good programme that made me itch to join in! However, having attempted tap dancing in the past and finding that I could either manage feet or arms, but not together, I know that it is much harder than it looks. There were professional dancers as well as novices and the end result was great. The programme also featured various other dancers and was a real revelation. The Guardian review can be found here http://www.guardian.co.uk/stage/2010/dec/02/clog-dancing-revival .

Following on from that, today I watched a programme celebrating folk dances from around England - 'Still Folk Dancing after all these Years' - where two clog dancing and folk singing sisters went around England during the summer months, following various folk dance festivals. This was fascinating and shows that despite pressures to ignore our heritage, thanks to some groups, it is still live and kicking (or should that be dancing?), and long may it continue to do so. A link to a review is here:
http://uk-tv-guide.com/pick-of-the-day/10+December+2010/music-still-folk-dancing-after-all-these-years/
Posted by Ellie Foster at 18:49