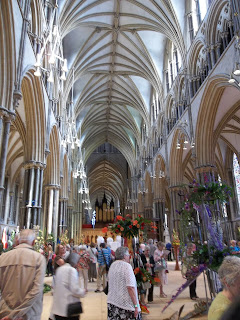 I went to the flower festival (which is held every 5 years or so) on the opening day and it was very busy.  There were the most beautiful arrangements all around the Cathedral building and out to the Chapter House and cloisters.  It was a very bright day, but when the sun went in, suddenly the Cathedral was rather dark, so some of my photos weren't as successful as I would have liked.  I enjoyed looking round very much but felt that the Cathedral rather dwarfed the displays.  However, to create displays on the massive scale of the Cathedral itself would perhaps be rather difficult, not to say impossible.  I have included some of my favourite arrangements, but rest assured, this is just a small selection of my photos. 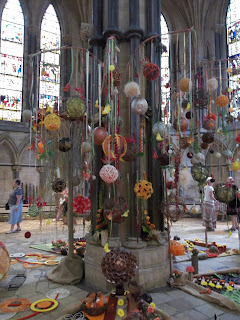 The theme of the festival was 'Dreams of Gold' and all of the 117 arrangements had a link to the Olympics.  In the Chapter House, there was a celebration of ball sports. 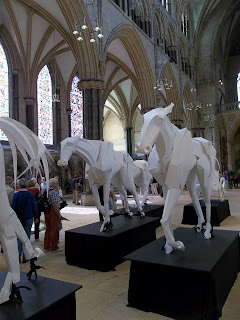 These life size paper sculptures represented the chariot races in Athens and were created by Richard Sweeney. 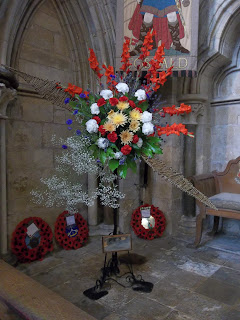 This dramatic arrangement was placed in the RAF chapel and represented the poem 'High Flight' by Plt Officer Gillespie Magee. It ends with the line 'Put out my hand and touched the face of God'. 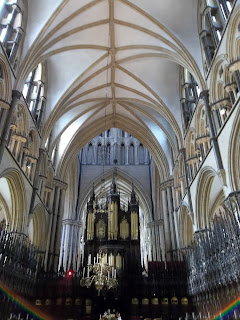 It was easy to be distracted by the beauty of the Cathedral building, which I was, several times! 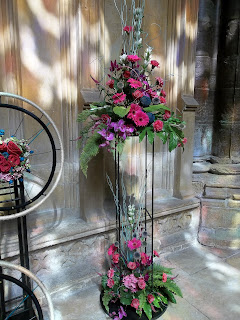 The arrangement above represented the Paralympics. 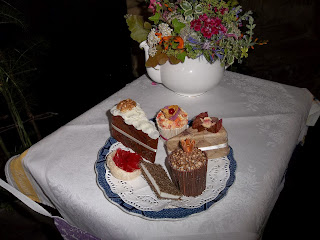 While this rather appetising plate of cakes, made using flower petals, was part of the London 1948 'Austerity Games' display. 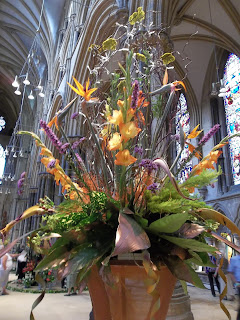 There were some bold and dynamic shapes using dramatic and fiery colours... 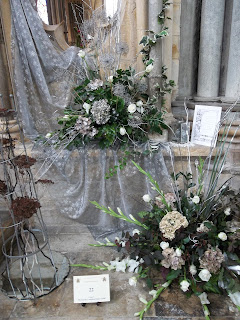 ...which made a contrast with the delicate colours seen in other displays 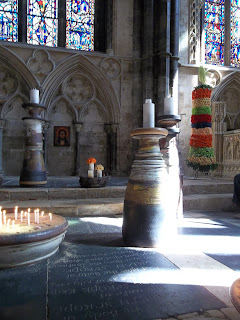 I must admit that this seemingly simple pillar of flowers, echoing the 'Gilbert Candles' was one of my favourite pieces. 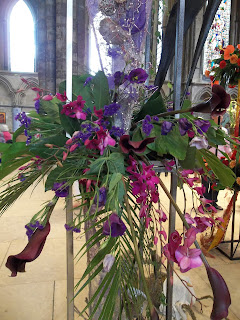 I love the vibrant pinks and purples in this pillar display. 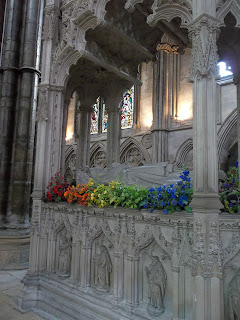 Even some of the resident statues of Bishops were beautified, like this one with the rainbow of colour surrounding him. 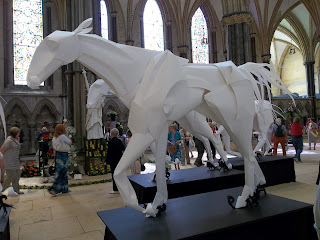 Another view of the paper horses. 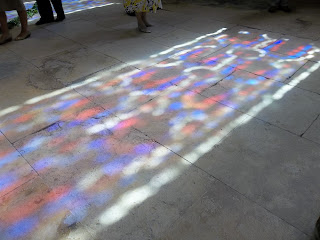 The Cathedral distracted me again with this lovely stained glass pattern on the floor.
It was a wonderful display and showed just how inventive flower arrangers can be.  Groups and individuals from around Lincolnshire and other neighbouring counties came together and produced the most fragrant celebration of nature and artistry.
Posted by Ellie Foster at 14:20