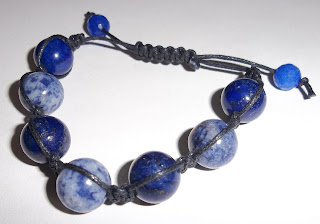 My latest bracelet was for a friend whose birthday was way back last September. I did give her a present at the time, but then said (as I find myself doing quite often) "I'll make you a bracelet with your birthstone in it!".  I tried to make a bracelet incorporating lots of blues and greens and using a silver toggle clasp but wasn't happy with it and having taken it to pieces twice, I decided to give up and make a macramé one instead.  It was so much easier and I was happy with it straightaway!  It has Lapis Lazuli (one of September's birthstones) and Sodalite (the blue and white stone) and two small quartzite or agate (I'm not sure which) on the knot ends.  I think my friend liked it, even though she had to wait several months to receive it!
I have been busy working on some blue polymer clay beads and some royal blue glitter beads which I am going to use in several macramé bracelets, alongside gemstones too.  I am also busy making all sorts of exciting things for one of the three blog swaps I have signed up for.  I will post photos eventually, when the recipients have received their parcels.
Posted by Ellie Foster at 17:03