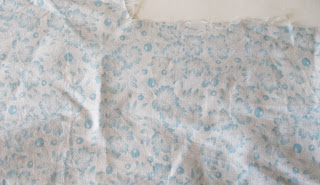 It all started many years ago, when I was about 5 or 6 years old.  I was desperate for a dress with puffed sleeves.  I don't know what it was that had given me this overwhelming longing for puffed sleeves, but it was there.  Eventually, my Granny made me a little dress with puffed sleeves out of the blue floral fabric above.  When I read Anne of Green Gables for the first time, I really identified with her longing for a puffed sleeve dress.
So, moving on to the present.  I found a small piece of the material which Mum had kept, so decided to make something with it to remind me of the joy of having that dress.   I had thought to include it in my bunting, but there wasn't enough to make two triangles, which is what I needed.  I then thought I could make a rabbit.  The leap from bunting to rabbits isn't exactly clear, but it was due in some part to seeing linen rabbits in clothes all over the place, on lots of blogs.  (Some of the most detailed and beautiful can be seen over at Millefeuilles , and the owner has recently included mice too).  Anyway, I digress again!  I decided I could make a rabbit dress out of the fabric instead.  Then came the hunt for a pattern.  I looked at the pattern which Helen Philipps had included in her book Pretty Patchwork gifts and at the rabbits which appear on her blog here but ended up being seduced by the rabbits in the floppy hats which appear in this book (the Tilda ones).  You can see the rabbits page from the book in the final photo. 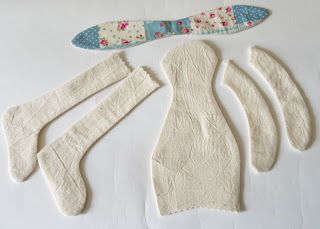 So, here is where I have got to with my latest WIP (Work In Progress).  It is cut out and sewn together, but requires stuffing, sewing up and clothes making.  Chris suggested that I should make a pinafore/apron out of the floral material and I like that idea.  I have some plain pale blue cotton which I can make the dress from, using the pattern in the Helen Philipps book. 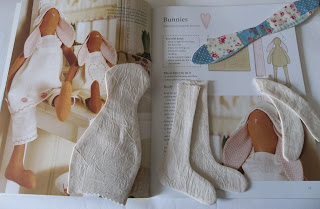 I am intending to make a dress with a higher waistline and then the pinafore/apron over the top, a hat and some pantaloons too.  There's nothing like a challenge!  I'll keep you updated on my progress.  Little did I know where the puffed sleeves would take me...
Has anyone been watching the Great British Sewing Bee on BBC2?  I said I wouldn't watch it, but have succumbed and have really enjoyed it so far.  It is lovely to see such a wide range of ages all taking part and creating such different things.  It is also great to see a person create something from start to finish (this is aimed at you, Kirstie Allsopp, who has a go and then lets experts finish off) and gives me hope when even people who know what they are doing sew something on the wrong way round! I understand the programme hasn't been doing well in the ratings, but I'm going to keep watching it.  If it encourages people to get sewing, it has to be a good thing! ﻿
﻿
﻿
Posted by Ellie Foster at 13:14