My meringue trials and tribulations all began a few months ago when a colleague and I were talking about growing soft fruit.  I am growing raspberries and blueberries in tubs and he is lucky to have a large garden so can grow raspberries in the ground.  He said he would bring in some raspberries and I rashly suggested I could make a meringue (never having made one before, you understand!) and we could have a pavlova at work.
So, the months rolled on and last week he brought in some raspberries.  I used a Delia recipe and made my first attempt.  It turned out rather browner than I would have liked and was very squidgy in the middle.  So we had to have Eton Mess with the outer, crispier bit, but that was very tasty.
Undeterred, I looked on the internet to see what I may have done wrong and discovered that 1) I hadn't whipped the egg whites for long enough and 2) the oven temperature was too high.
Yesterday, I tried again.  I whipped the egg whites until I could put the bowl upside down over my head without them moving and I lowered the oven temperature and put the meringue on the bottom shelf. 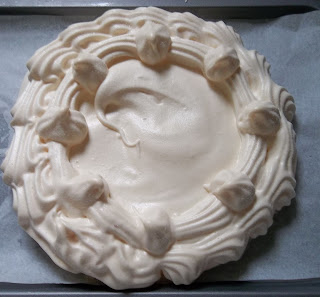 ﻿
Here it is when baked - SUCCESS! 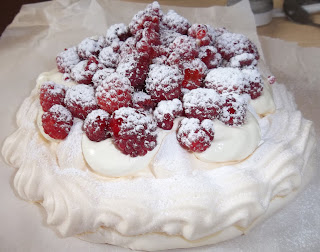 Here is the finished pavlova (a perfect summer dessert) with double cream (and a bit of natural yogurt mixed in), my colleague's raspberries and icing sugar. 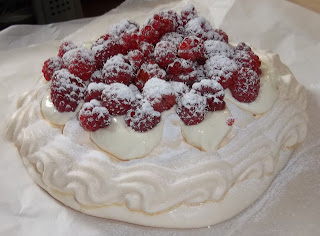 We all enjoyed it and I was delighted with the meringue consistency - crispy with a slightly chewy bit in the middle - YUM! (The only thing that worries me is, was that a one off, or will I be able to repeat the success when my blueberries are ripe?!)
Posted by Ellie Foster at 19:04