Not content with finishing my rabbits project, I have also been enjoying experimenting with polymer clay, having seen some new techniques and equipment which I wanted to try out.  Above is a Sutton slice (named after the creator) which is made using an unmounted stamp which you push the clay into and then cut it flush with the surface, then use another piece to pull it out of the stamp. (That probably makes no sense, but there are tutorials on the internet if you are interested).  It creates a highly textured, patterned surface. 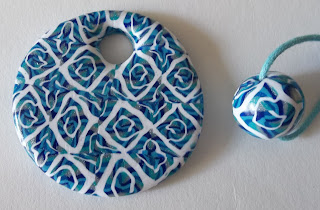 I have also been trying new cane techniques, such as spiral and wrapped.  Any offcuts were made into beads. 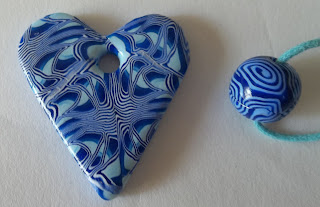 This pattern was made by wrapping thin pieces of two colours of clay in a wave pattern. 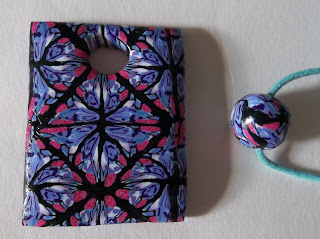 This is a kaleidoscope cane, made into a repeating pattern - well named, I think. 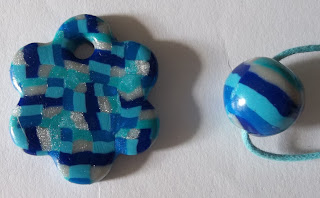 These were some offcuts from the second pendant, but I liked the colours, so made another repeating pattern using blocks of the colours. 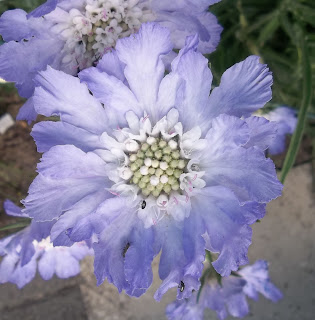 You may remember this scabious which I saw at the Market Rasen Open Gardens.  It made me think of a Ginger Rogers dress and I said at the time that I would like to try to make a pendant, inspired by it.

Here are two pendants, using a simple technique of blending colours into each other.  I didn't quite get the colours to be a perfect match for the scabious, but the end result was pleasing. 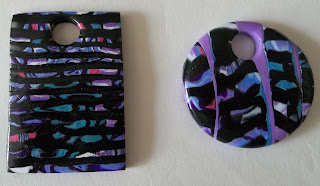 Another new technique, the Stroppel cane (again named after the creator).  It is a good way to use up ends of canes.  The pendant on the right has a very 1980s feel to me - it makes me think of leg warmers and leggings for some reason!  That one was made by putting the Stroppel canes through my clay roller so that the pattern became wider. 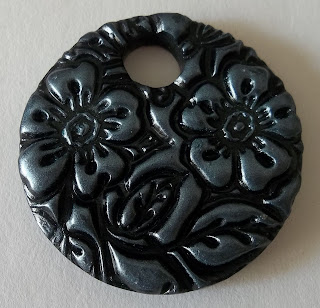 This was the simplest new technique, but I think it is my favourite.  It is stamped with an unmounted stamp and then a teal/blue/green mica powder was applied to the top surface which highlighted the pattern.  I have now got lots of different colours of mica powder so am going to see what they look like on different background colours.

Finally, some beads made from offcuts.
I have also found another new technique using alcohol inks which can make lovely backgrounds and can then be stamped over...watch this space.
Posted by Ellie Foster at 15:25