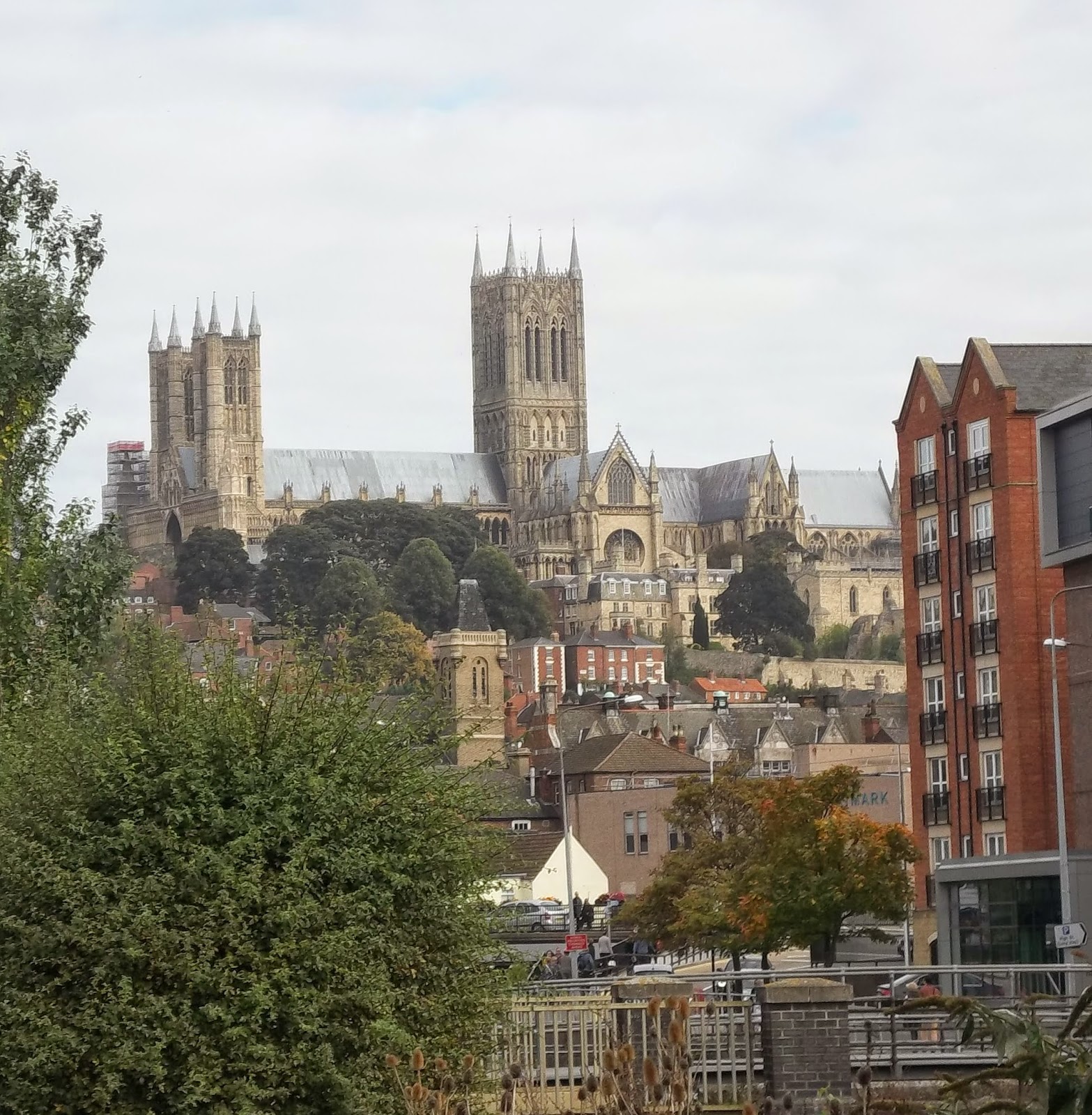 Yesterday, a friend and I headed off to sample the delights of two vintage fairs being held in Lincoln.  As she said, 'vintage fairs here are like buses, nothing for ages and then two turn up together!'  Above is a photos of the cathedral, just because I like it! 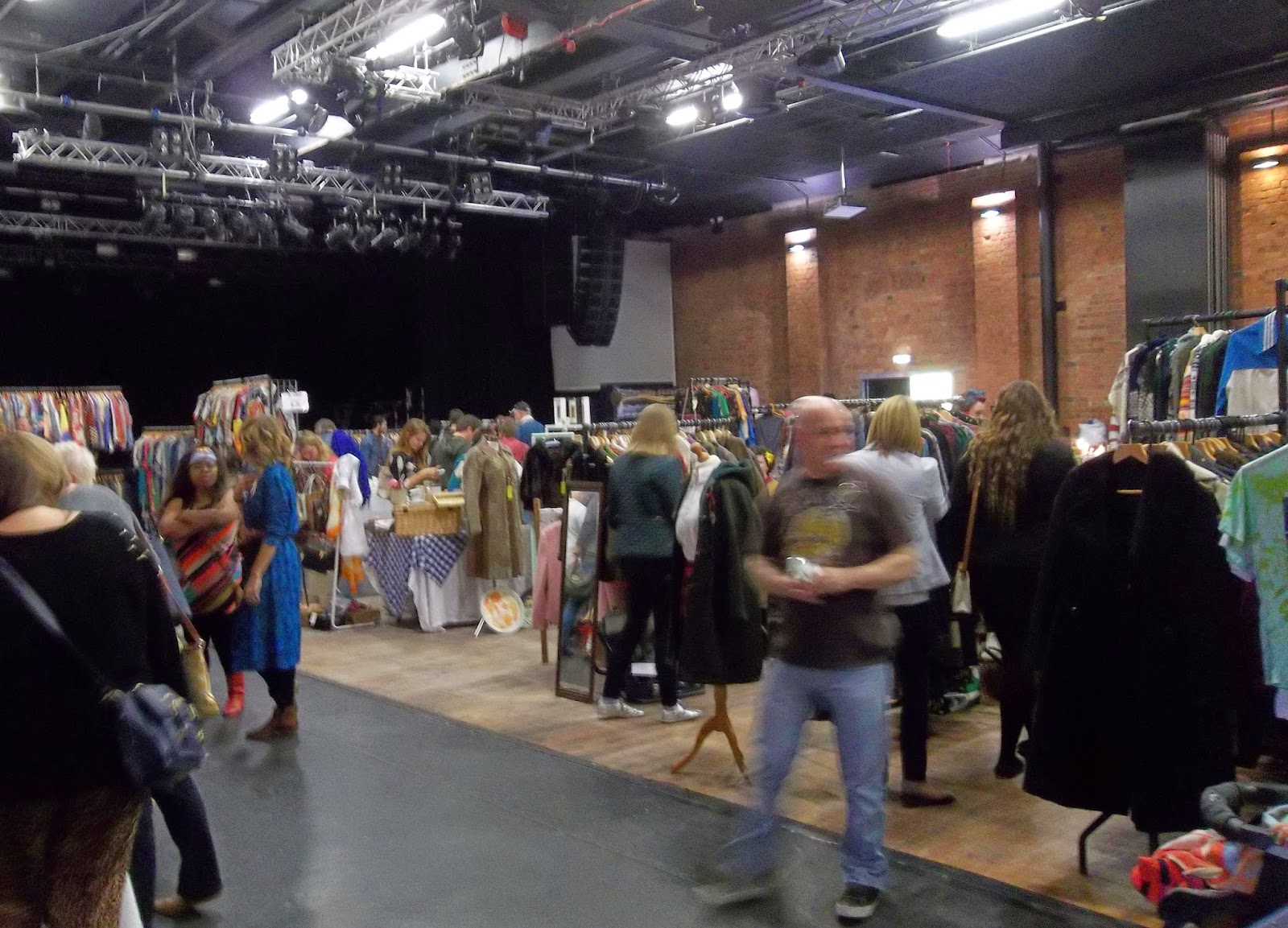 The first fair was held at the University of Lincoln, at The Engine Shed, a venue which used to be, yes, you've guessed it, an engine shed!  There were quite a few people there and we were there when it started.  It was a real trip down memory lane and the 1980s fashions with ruching, bows and dropped waists were very familiar. In fact, I owned several of those types of dresses!  There was also a plethora of crimplene but also some very nice 1950s and 1960s dresses too, though, sadly, not in my size.  The music was quite random though and didn't really fit so well with the vintage theme. I bought some material and hope that there is enough for me to make a tunic dress. 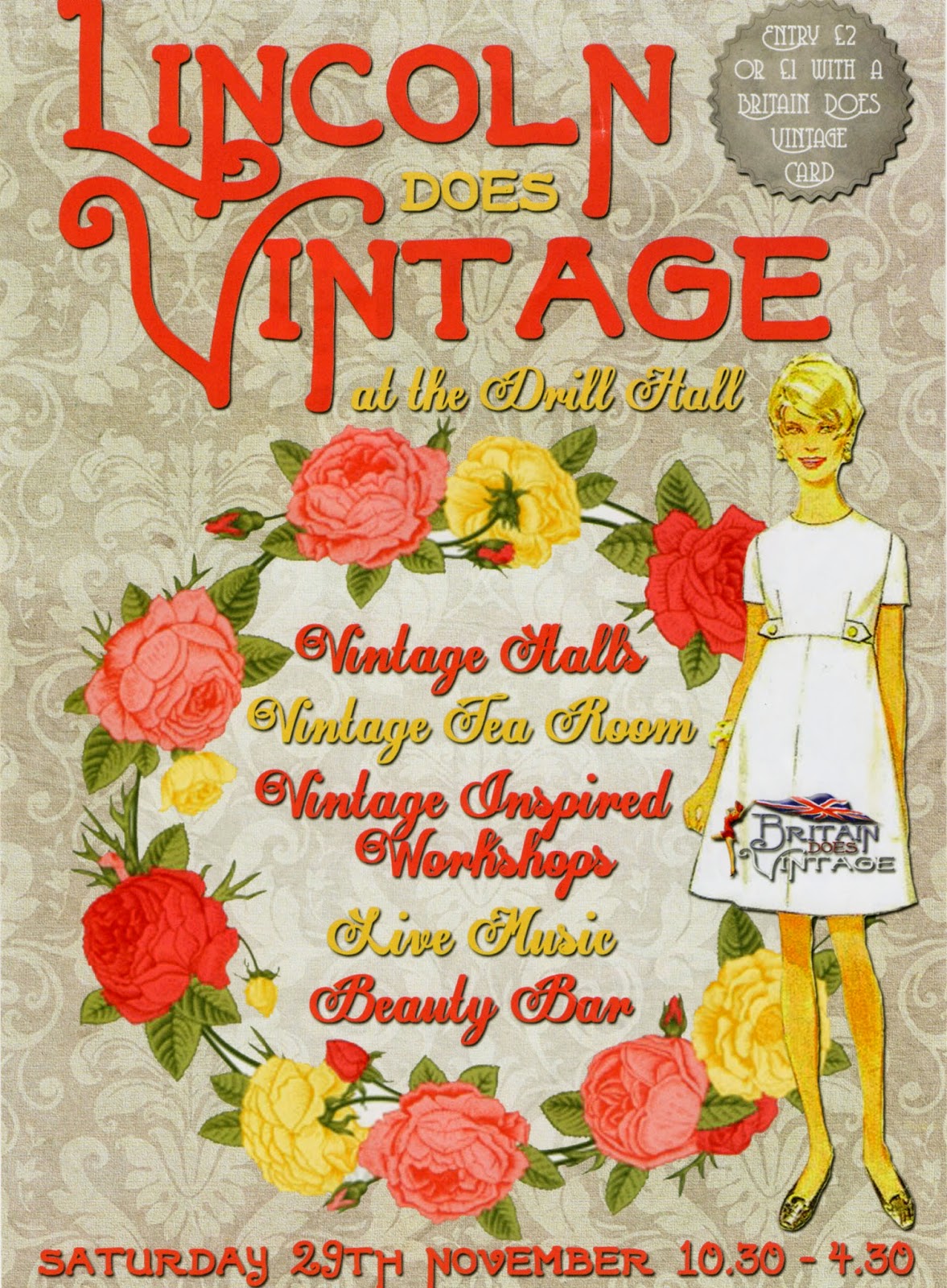 The next fair was organised by Britain does Vintage and was at the Drill Hall, a lovely theatre/music/comedy venue which used to be, yes, a Drill Hall! 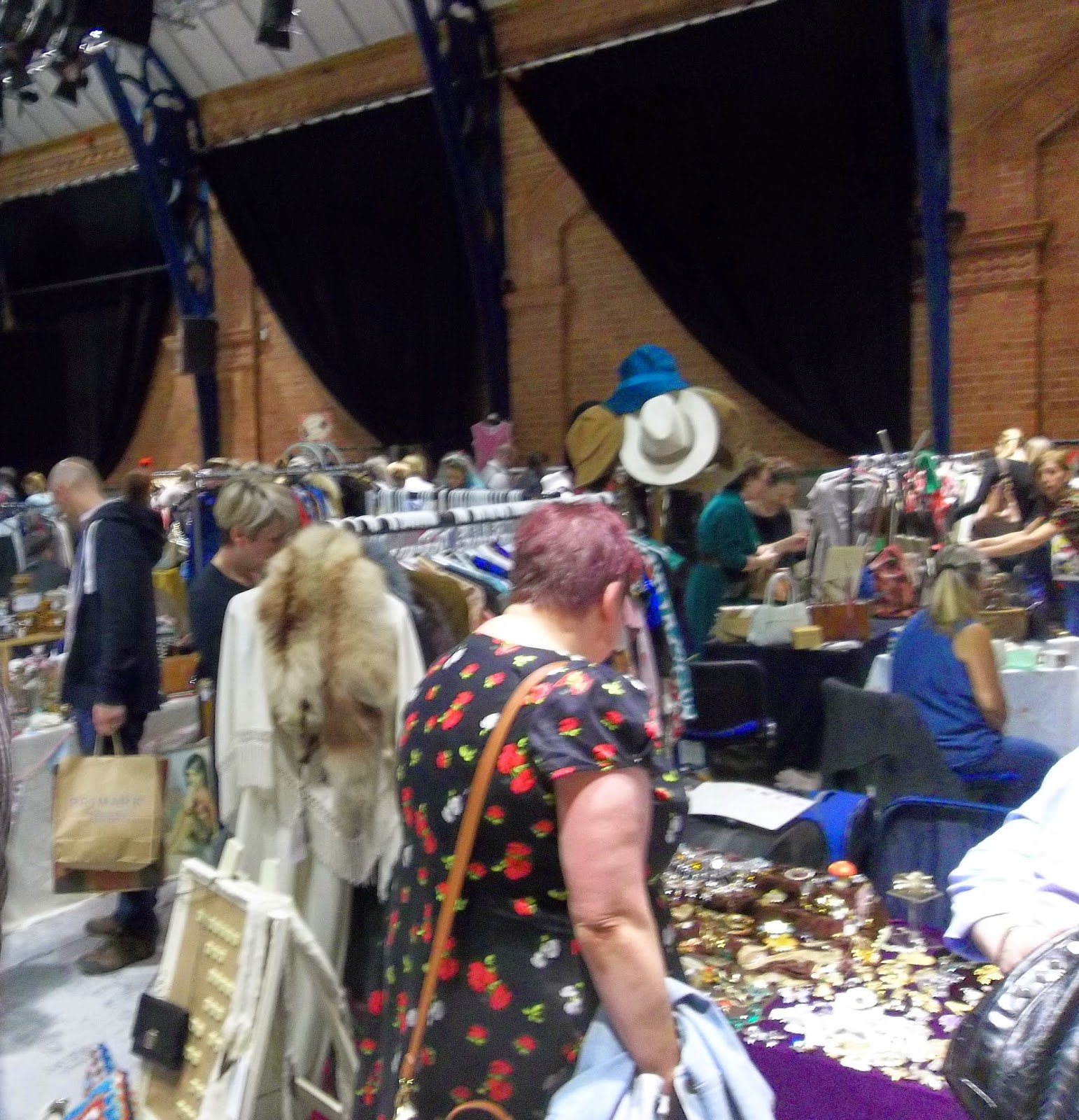 I must admit, of the two fairs, this was our favourite.  The music was suitably vintage too, ranging from the 1940s to the 1960s.  There were some beautiful 1950s dresses here too, and one in particular caught my eye.  It had red roses on it and a high collar at the front, then at the back, the collar dipped down and had a lovely bow with long tails which covered the zip. It had a full skirt and I could just imagine myself in it. Sadly, it wasn't my size though. 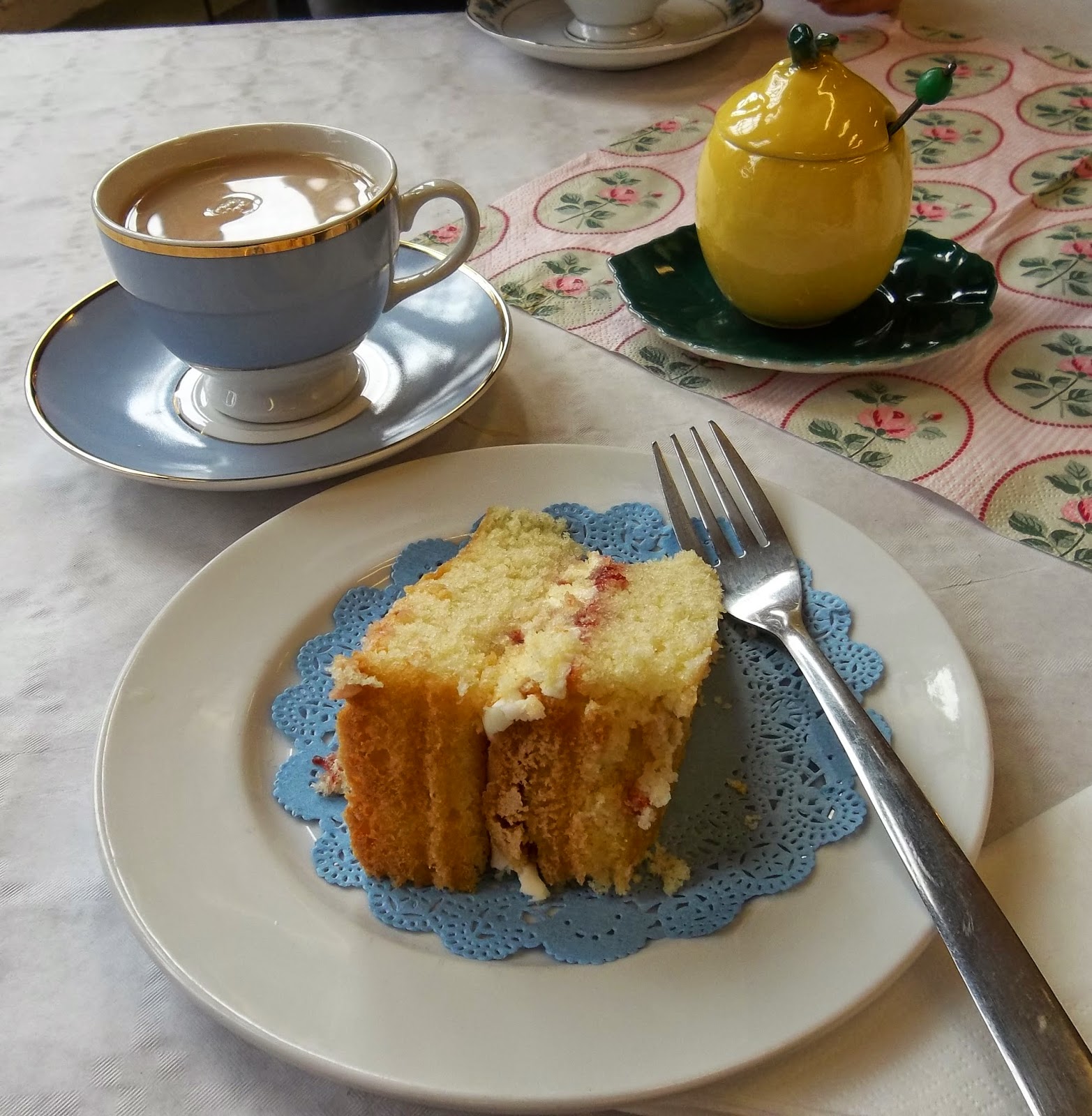 The other thing we really liked about this fair was the tea room above the main hall.  It was decorated with patriotic and floral bunting and had proper china.  The ladies serving the refreshments were dressed in vintage clothes and the music was mainly from the 1940s - Glenn Miller featuring quite a bit.  In the photo above, you can see the cake I chose (and delicious it was too) and a little lemon pot which my friend bought as a Christmas present for a member of her family as she collects them.  I bought more material! 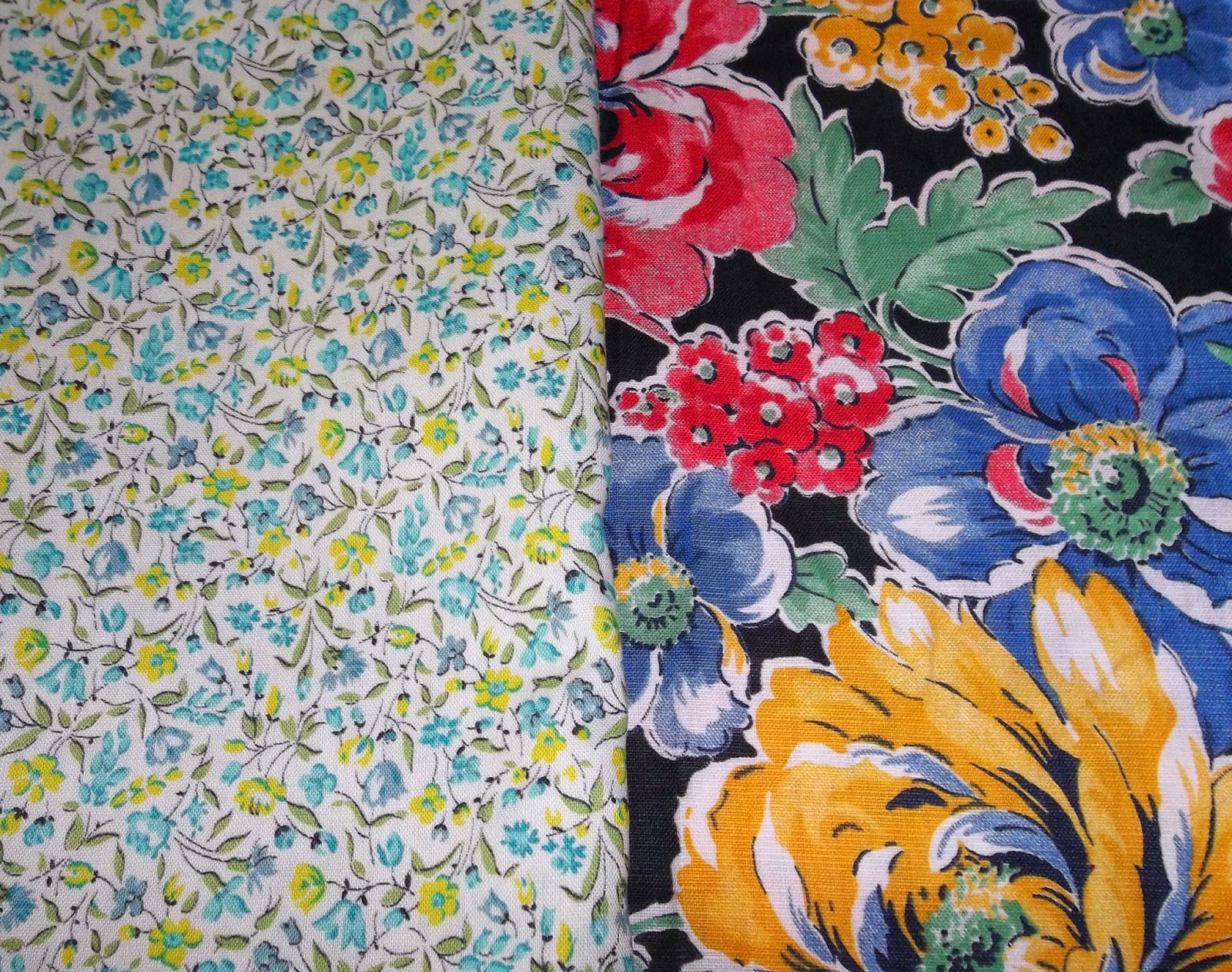 Here are the two rather different patterns I bought.  I'm not sure how vintage they are, but they were very good value. The Liberty-type pattern was from the first fair and the fabulous floral number was from the second. (I showed them to Chris, who said the one on the right was 'a bit loud').  He's probably right, but I like it!  The plan, as I mentioned, is to make them into tunic dresses, to be worn with leggings and ankle boots at this time of year.  However, I am seriously contemplating a few sewing lessons because I am not at all confident about making clothes and I think a bit of tuition from someone who knows what they are doing would help.  I really want to make some clothes, so watch this space...
Posted by Ellie Foster at 18:56