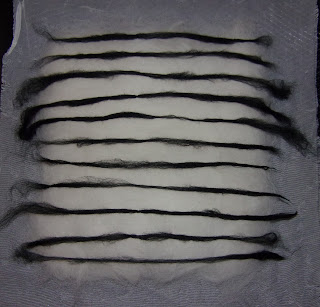 It has been over a year since I made any felt from scratch (hangs head in shame!).  So, I decided this disgraceful state of affairs had to be sorted.  I needed some stripy felt for a project and I had also been inspired by a programme on Scottish Art which showed neolithic cup and ring carvings, which I thought might translate well into felt.  Circles and spirals seem to have been an inspiration to many people and cultures all through the past, and there is something very satisfying about those particular shapes.
Armed with my enthusiasm, I got making.  (I was slightly concerned in case I had forgotten how to make felt, but needn't have worried, as it all came back to me!)  I used merino wool as it blends easily and felts quite quickly. 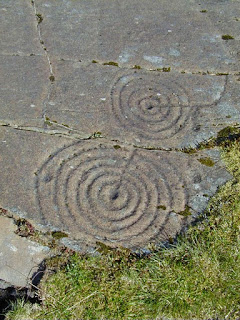 Here is an example of one of the cup and ring carvings. (photo from:
http://www.educationscotland.gov.uk/scotlandshistory/earlypeople/cupringmarks/index.asp) 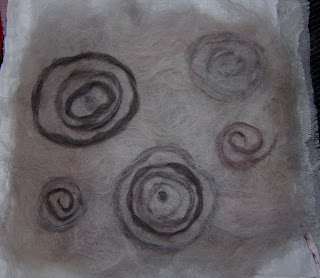 Here is my interpretation, before felting.  I made this as a practise piece, because I want to add surface texture with embroidery, which I haven't quite managed to do yet. 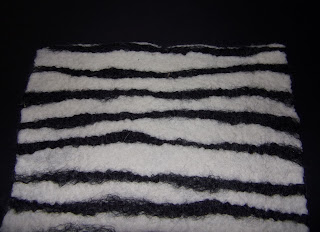 I had already used the stripy piece before realising I hadn't taken a photo of it after felting, so this shows half of it.  I like the way the stripes aren't regular, but that is one of the lovely things about felt making - the wool does decide how it wants to be during the process and the maker can only alter it so much. 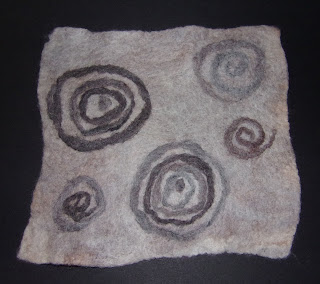 Here's the circle/spiral piece after felting.  The concentric circles and spirals moved about a bit despite me trying to keep them in one place, but I am pleased with the overall effect.
Now I need to get embroidering...
Posted by Ellie Foster at 18:39