'Blind Date with a Book' 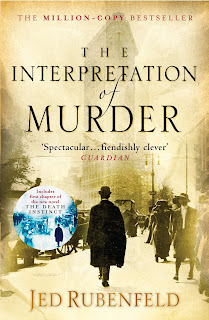 (All photos from Amazon)
The University where I work has just finished an initiative in the Library called 'Blind Date with a Book'.  One hundred and four books were wrapped in tissue paper so that you didn't know what you were choosing. Being an avid reader, I decided to take part and here are the four books I chose.  At the top was one I don't think I would ever have chosen, so it was a good start.  The premise was interesting - what happened to Freud during his visit to America which would put him off Americans ever after?  The author's idea was that he could have been involved in a murder case.  Although the psychoanalysis went above my head in some places, it was a gripping (if a little gory) story and I had no idea who the perpetrator was... 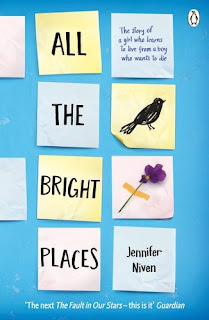 The second book was this novel for young adults - again, one I probably wouldn't have chosen for myself.  It discusses mental illness - and suicide - from the point of view of two traumatised teenagers who develop a bond when one stops the other from throwing themselves off a tower.  Although sad, it was poignant and powerful and it had an uplifting feeling at the end. 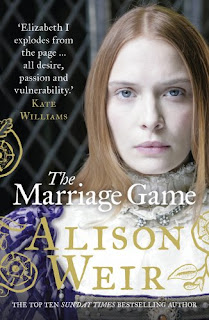 Number three was something completely different - a historical novel written about Elizabeth I and the attempts from various parties to get her to marry.  I prefer historical fact, rather than fiction, but a lot of this was based on fact, if slightly amended for the time frame.  It was an interesting view into how her mind might have worked and what her feelings might have been. 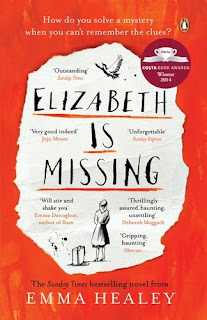 I did cheat slightly with number four.  I had seen that this book was in the Blind Date and really wanted to choose it...however, once the Blind Date had finished, I asked the librarian if I could have this one and they kept it back for me - they are lovely!  I had read the reviews and was intrigued by the premise of a lady in her eighties with dementia, who feels that her friend Elizabeth is missing.  Her mind goes back to the disappearance of her sister after the war and in solving one mystery, she inadvertently opens up another.  It was a gripping story; one of those which is difficult to put down and one which stays with you after finishing it.  In fact, I will read it again before taking it back to the library.
So, although I didn't manage to read many of the Blind Date books, it did encourage me to read outside my usual choice and broaden my reading horizons.  I hope they repeat it at the Library next year.
Posted by Ellie Foster at 16:21

Labels: All the Bright Places, Blind Date with a Book, books, Elizabeth is missing, The Interpretation of Murder, The Marriage Game, University Library