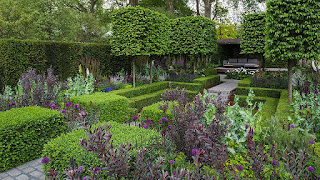 Chelsea week is here again and I have been watching the television coverage on the BBC, as I usually do.  I haven't ever been to Chelsea but I don't feel I miss out too much as there is so much information available, All the photos are from the RHS (Royal Horticultural Society) Chelsea website .
I must admit that I haven't felt as enthusiastic about the gardens as a whole this year, but I do have some favourites which I have chosen to share with you.  I like the formality of the Husqvana garden above, with the exuberant planting softening the lines. 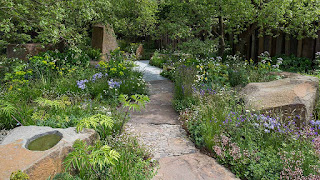 Cleve West's evocation of Devon has some beautiful touches, such as the water filled stones and the delicate planting. 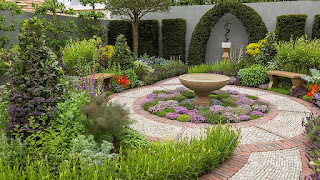 Jekka McVicar's Apothecary Garden is one I would love to have as a part of a larger garden (well, we can all dream) as it is meditative and calm as well as useful with its culinary and herbal plants. 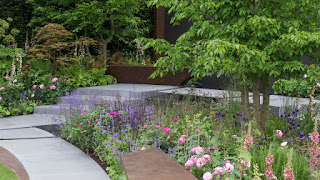 The planting in The Chelsea Barracks garden is lovely too - pinks and lilacs... 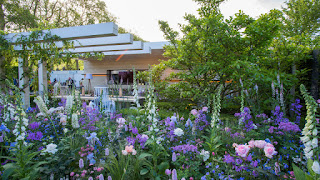 ...as is the LG garden planting. 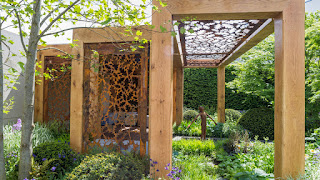 Chris Beardshaw designed the Morgan Stanley Garden for Great Ormond Street Hospital so it is lovely to think it will provide shade and calm for upset, worried and stressed families, once the flower show has finished. 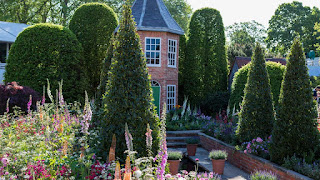 Of course I had to include this one, the Harrod British Eccentrics garden by Diarmuid Gavin, inspired by the illustrations of Heath Robinson.  I loved Heath Robinson's illustrations for the Professor Branestawm stories by Norman Hunter. A still photo doesn't do this garden justice, but the bay trees turn, the box bushes go up and down, the border in front of the building revolves and the window boxes also go up and down.  I think the roof of the building also opens. There is lots of colourful planting too.  It made me smile!
(edited to add...) 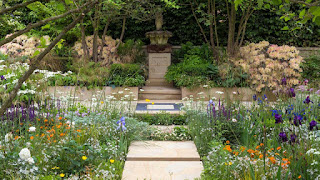 I hadn't included the garden above (God's Own Country by Matthew Wilson) because the focus had been on a view of a rather large and dominant garden room, based on a window from York Minster on its side, with stained glass behind it, which I felt wasn't as attractive as it should have been. However, the TV coverage the other night looked at this garden from a different angle  and I felt I had judged it rather harshly, because the planting was beautiful.  The stained glass was lit up at night too, which looked lovely.  Perhaps seeing it as a whole was the secret to this garden's success, as it won the People's Choice Award. 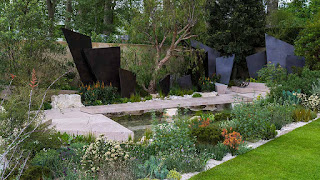 Yesterday, the presenters were saying how the best show garden (above) (for The Telegraph and designed by Andy Sturgeon) was 'masculine' and while men seemed to like it, women were not so keen. I appreciate the expertise and design of the garden, but it is all sharp angles and hard landscaping and doesn't appeal to me.  The interesting thing was that all the RHS judges this year were men - as one presenter said, this needs to be addressed.  Would it have made a difference to  the medals if women had made up half of the judging team?  Now there's thought...
Posted by Ellie Foster at 19:58