A bit of upcycling - or should that be 'Make do and Mend'? 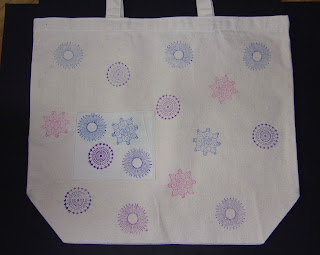 I was given two very nice thick cotton bags which was great.  However, there was a company logo printed on them which I didn't really want to see.  I made a calico patch and sewed it over the offending logo and then printed some patterns using wooden stamps and fabric paint.  I was really pleased with the end result. You can see the patched side above. 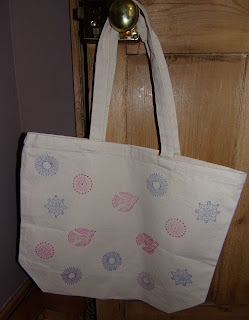 The other side of the bag, without any logo. 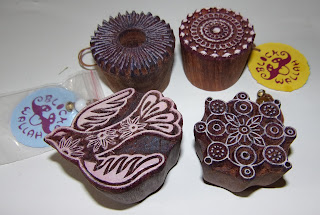 The stamps I used were Blockwallah  stamp blocks which are hand carved in India out of a type of rosewood.  They are very decorative and beautiful in their own right and if I had an empty shelf, I would display them.  (I bought mine from Create and Craft  and I have bought them all with my hard earned money - no sponsoring or freebies here!)  I thought I would post about them because I really like them.
The second bag will be decorated with patchwork hexagons (once I have sewed them together...) 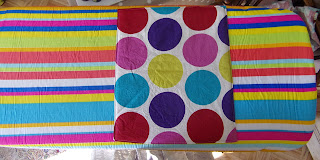 Buoyed by this success, I attempted another project.  I was going to throw the ironing board cover out because it had worn where the iron usually stands.  Then I had a brainwave and located an old cover which I had kept as a spare.  I cut a piece from that and patched it over the current cover and hey presto, a cover that we can still use.

OK, it looks a bit odd, but at least the colours work!  Now, what else needs sorting?
Posted by Ellie Foster at 13:56