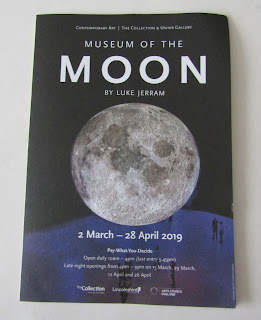 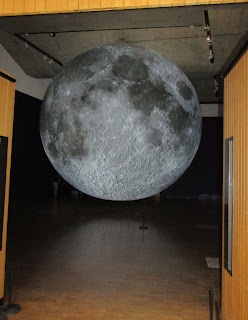 The sculpture is internally lit and is presented in a darkened space, adding to the ethereal quality. There is a soundtrack alongside the sculpture which features various sounds such as astronauts talking and rockets blasting off. 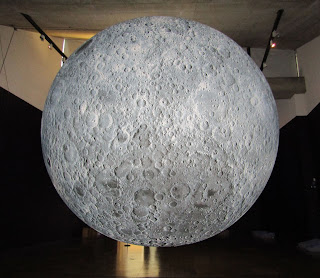 The best moment for me was when the soundtrack featured Clair de Lune by Debussy.  The music and the moon worked so well together and it was a magical experience. 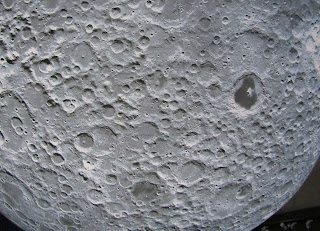 It does look as though you could reach out and touch it, but there were barriers to stop you getting too close. 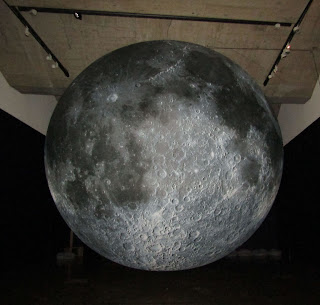 While contemplating the sculpture, I was thinking back to the first poem I had to learn at secondary school which was Silver by Walter de la Mere.  I think it is appropriate to include it here:

Slowly, silently, now the moon
Walks the night in her silver shoon;
This way, and that, she peers, and sees
Silver fruit upon silver trees;
One by one the casements catch
Her beams beneath the silvery thatch;
Couched in his kennel, like a log,
With paws of silver sleeps the dog;
From their shadowy cote the white breasts peep
Of doves in a silver-feathered sleep;
A harvest mouse goes scampering by,
With silver claws and a silver eye;
And moveless fish in the water gleam,
By silver reeds in a silver stream. 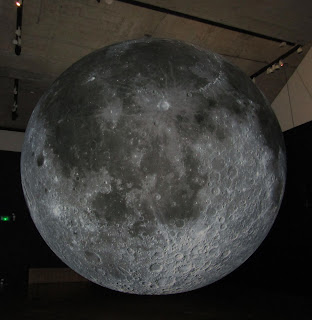 The other piece of writing I thought of was from The Little White Horse by Elizabeth Goudge.  This was a written comprehension exercise at school:

It was all silver. Upon each side of them the trunks of tall trees rose from grass so silvered by the moonlight that it glimmered like water. The trees were not thickly planted, and beautiful glades opened between them, showing glimpses of an ebony sky set with silver stars. Nothing moved. It was all quite still, as though enchanted under the moon. The silvery tracery of twigs and branches above the silver tree trunks was so delicate that the moonlight sifted through it like a fine film of silver dust.


But there was life among the trees, though it was life that did not move. Maria saw a silver owl sitting on a silver branch, and a silver rabbit sitting up on its haunches beside the road blinking at the lantern light, and a beautiful group of silver deer . . . And for a fleeting instant, at the far end of a glade, she thought she saw a little white horse with flowing mane and tail, head raised, poised, halted in mid-flight, as though it had seen her and was glad. 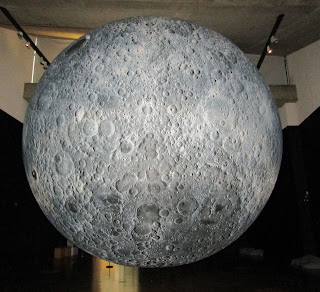 While I did enjoy moments of calm and contemplation, these were only while I was on my own.  My cue to leave was when a group of rather excited ladies came in and proceeded to take selfies and speak loudly as they walked round.
The other thing was that I felt the space was just too small to do the sculpture justice.  In other places where it has been exhibited,  the moon has been suspended in a huge space, such as a church or cathedral, so that people could sit or lie underneath it (people walking underneath it can be seen on the brochure front). I think that would have been fascinating.   However, I am pleased I managed to see the moon - the closest I will ever get to the real thing.
Posted by Ellie Foster at 14:39