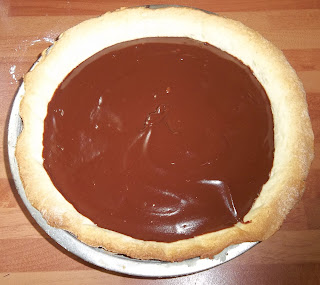 Like everyone else, we have watched the jubilee celebrations this weekend - from the wet Thames sail-past, via the concert to the service and appearance on the balcony and the fly past by the amazing planes.  However, my post doesn't really have much to do with all that (although Chris did wave a flag while sitting in his chair in front of the TV, if that counts).  This is all about a vegan chocolate tart which I made for lunch with Rachael yesterday, before she heads off to London.  Amazingly, this recipe was by Jamie Oliver and was actually called a vegan chocolate tart.  Anyone who is a vegan, or knows a vegan will realise how difficult it is to find yummy recipes that everyone else would enjoy too.  Such is this one.  The filling is rich and smooth, made with soya milk, cornflour, sugar, dark chocolate and vanilla essence.  The pastry is made in the usual way, but has icing sugar and ginger in it. 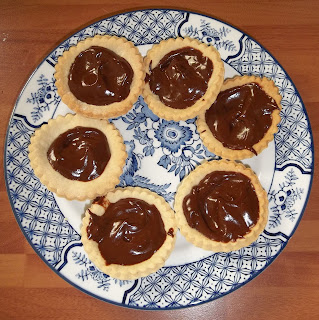 I had enough pastry left over to make some individual tartlets. 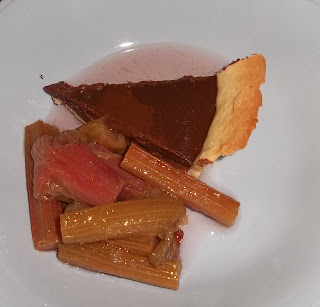 Here it is with the recommended accompaniment of baked rhubarb.  You only need a very small piece of the tart as it is so rich and I used half the amounts in the original recipe.  I have to admit, the pastry caused me a bit of a headache as it was really hard, more like a biscuit than pastry, but I think this was down to the addition of the water (too much) and the way the icing sugar reacted (by going very squidgy). 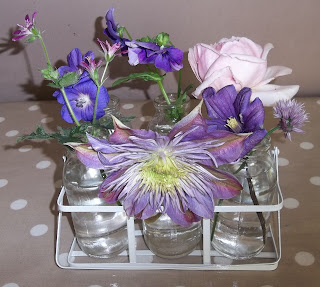 Not exactly red, white and blue - more like lilac, pink and purple, but these are some of the flowers blooming away at the moment in the garden.  I treated myself to the lovely mini-milk crate from   dotcom giftshop  as I saw one on a blog that I follow ( Helen Philipps ) and just decided that I needed one!  I love flowers and beautiful floral arrangements, but can't quite get the hang of them myself.  So, this is perfect! 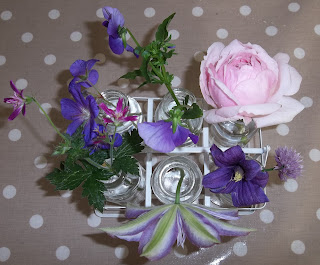