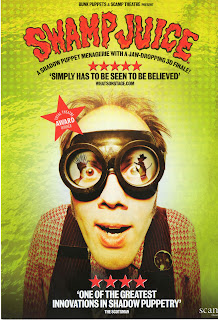 No, not a recipe for a strange drink, but a fantastically good shadow puppet show by Jeff Achtem which we saw last Friday night. Chris had seen (and been involved in - audience participation) a show he gave in Edinburgh at the Festival two years ago, and was sure that I would enjoy the latest show. The puppeteer is quite a strange character but he is amazingly inventive with his puppets and the way in which he manipulates them.  He spoke to the audience in a gruff, guttural way which took me a little while to decide I liked, but when he spoke as himself at the end of the performance, he had a quiet voice with a Canadian accent, so the previous incarnation was very much part of his performance.  He used all of his body including his hair, which became part of a snail and he also operated the lights with his toes.  The puppetry skills he demonstrated were incredible, especially as the puppets were created out of all sorts of bits and pieces.  Some of  the audience members were involved and became the bottom of the swamp/sea which gave the rest of the audience members who weren't involved, some good comedy moments.  Although this was a show for children, it had plenty to keep the adults amused too.  I was a little concerned when I saw all the very small children coming in, but actually, they were as transfixed as the rest of us!  He gave us a warning before the scary monster appeared, and the children could see that it was him actually manipulating the puppets, which helped those of a nervous disposition. 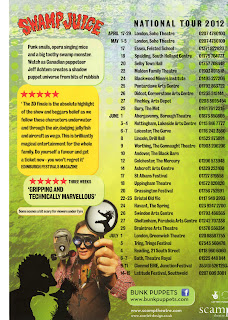 The back of the flyer shows some of the puppets he used.  The story was simple but effective (although I wanted to know what the motivation of the main character was - why was he so unpleasant - but Chris said I was over thinking it!) and the 3D finale was a real show stopper - if you have never had a shadow puppet fish come right at you, you haven't lived!  (He even lent us 3D glasses although we were asked to give them back and not 'nick them').  All in all, I would thoroughly recommend this show for the family and above are the remaining venues he is visiting, just in case there is one near you!  Here is a link to a preview of the show to whet your appetite:
http://www.youtube.com/watch?v=lZd3isK8EiU
Posted by Ellie Foster at 18:24