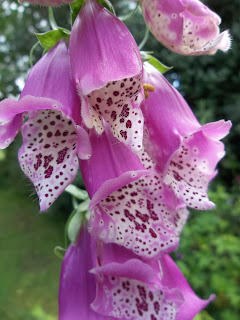 Still in the first garden we visited, in the more shady areas, there were lots of foxgloves, also alive with the sound of bees. 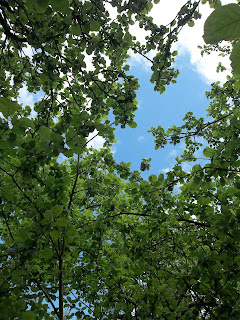 Looking up through one of the trees in the orchard area. 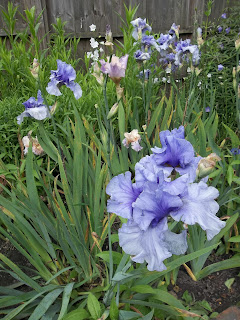 The second garden we visited was not quite so large, but was still cleverly sectioned off into smaller areas.  I was very envious of the lovely iris display the owners had. 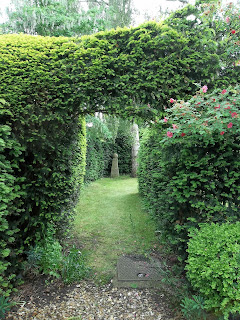 The third garden looked small but went around the back of the house and had room for a vegetable plot, pleached lime walk and rather a nice vista at the start. 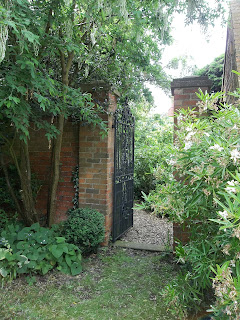 It also had a gate, leading into the rest of the garden.  Looking at these photos, I am obviously drawn to doors or gates in walls.  This is partly because they frame the view beyond so well, but mainly because I read The Secret Garden far too much and this longing for a secret garden of my own has stayed with me. 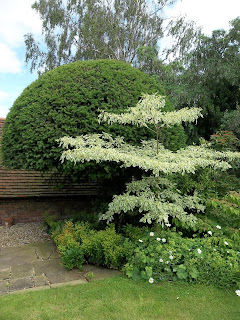 A very tranquil part of the garden with harmonious shades of green and white. 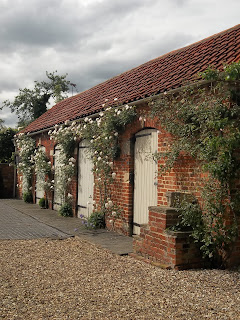 Even the stables (no horses now) were pretty, thanks to a covering of climbing roses.  I thought that the mounting block steps were crying out for some terracotta pots of red geraniums on each step.  I seem to think that image comes from Beatrix Potter and Peter Rabbit, but it could also be influenced by The Little White Horse, except the geraniums in that book were salmon pink.
What a wonderful way to spend a lovely afternoon (and the cakes were delicious too!)
Posted by Ellie Foster at 14:31