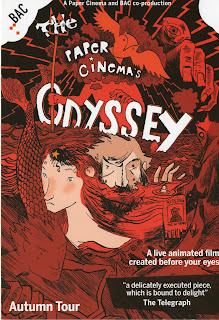 Chris and I experienced the most amazing piece of theatre last night.  A friend recommended this show to us, partly due to the use of puppetry but also for the magic of the performance.  We had had a busy day and weren't really in the mood to go out, but I am so glad that we did.  The story is based on Homer's Odyssey and is performed using beautifully drawn cut outs, lighting, and live music, played by multi-instrumentalists. 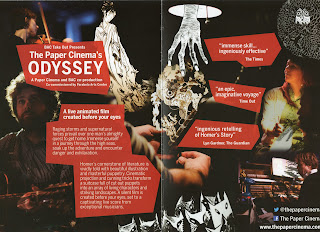 The puppeteer drew some of the characters in front of us and they were shown via video camera on a big screen.  Both the puppeteers sat on the stage, as did the musicians and it was difficult to know where to look as there was so much of interest going on everywhere.
I was a little concerned by some of the audience who were quite loud as we went in, but once the performance started, they were as transfixed as we were and you could have heard a pin drop.
There was no dialogue, but the music and artistry of the puppeteers created all the moods that were needed.  The musicians were extremely talented and some of the instruments used included a drill, a saw and a train whistle which doubled up as an owl hooting. The saw in particular gave the most beautiful ethereal sound which really added to the whole experience. 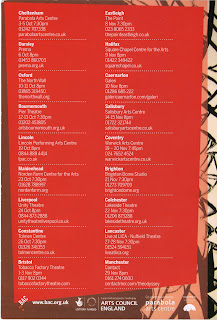 If this production is coming anywhere near you, please try to see it, as it is a truly unforgettable, magical evening.  The website - here - has a little taster video of the show if you scroll down.
Posted by Ellie Foster at 21:36