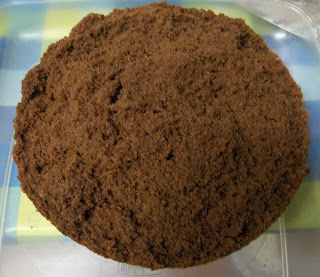 The title of this post will strike a chord with those of you who watch Strictly, as I am quoting Craig Revel-Horwood! I was making a Russian Roulette Revels chocolate cake (made for the first time last year for my husband's birthday - see here for my previous blog post on it) for my colleague Leanne's birthday and used a recipe I have used many times before.  All was going well until it came to the turning out of the cake.  Would it come out of the tin?  No, it wouldn't.  After loosening it with a knife and judicious amounts of banging around the side of the tin, I tried again, only to find the top half of the cake came out, leaving the bottom half still in the tin. 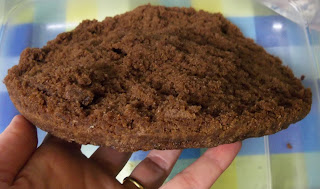 More loosening, scraping and banging ensued, only to find that a large portion of the remaining cake fell out onto the floor.  This was picked up and donated to the bird food for the bird table the next morning.  I decided to admit defeat and Chris suggested cutting the top piece in half, sandwiching it together with icing and having a half-cake cake. The photos above show the top half of the cake. 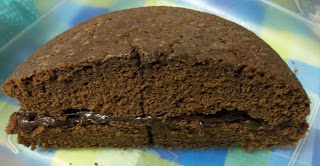 So, that is what I did and above shows the half-cake cake, with chocolate fudge icing in the middle.  "Dis-aaaaarrr-ster" (sort of) averted! 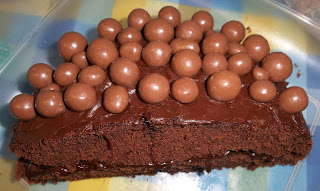 Here it is with the remaining Revels chocolates left over from the second attempt. 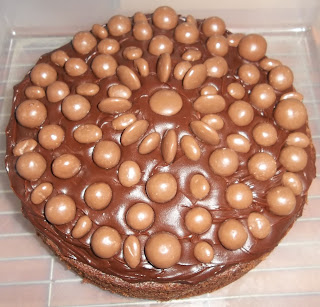 Here is the second attempt, made with baking parchment lining the tin, which avoided all the unpleasantness of the first attempt.  I am pleased to report that it was well received (even though I seemed to get more than my fair share of the coffee Revels and the raisin Revels, which I do not like at all).
Note to self: ALWAYS use baking parchment!
Posted by Ellie Foster at 13:32