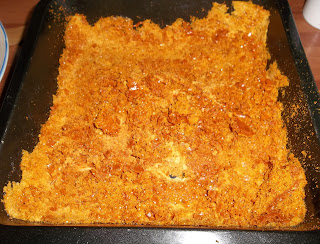 Not to be outdone by me and my baking dis-aaaarrrr-sters, Chris decided to have one of his own.  I don't think this was the intention as he announced that he was going to make some cinder toffee (or honeycomb, as I know it).  He used Nigella's recipe from How to be a Domestic Goddess and followed it to the letter.  The scent of toffee pervaded the whole house.  However, when I went in to see the finished creation, my first (and probably not very helpful comment) was "You'll never get it out of the tin!" 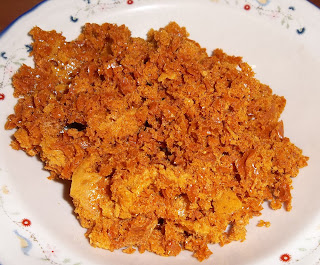 He had used (as Nigella said) a square tin that I use for flapjack, and although he had buttered it thoroughly, the thickness of the cinder toffee meant that it stuck very well to the tin.  A wooden spatula did managed to dislodge it, but it came off in bits, as you can see from the photos. 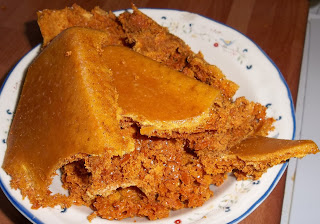 It tasted very nice, but as it sat there, it softened and became chewy, when it should have been nice and crunchy.  Another attempt may be made, utilising a different recipe and a flat baking tray...nice to know it isn't just me!
In my next post, I'll write down the chocolate cake with chocolate fudge icing recipe for anyone who would like it.
Posted by Ellie Foster at 12:46

Labels: cinder toffee, dis-aaaaarrr-ster, Honeycomb, How to be a domestic goddess, nigella