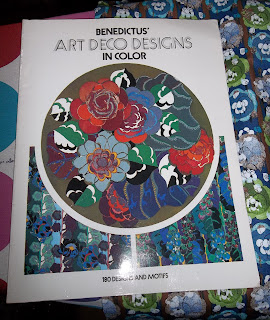 You may remember that I bought some fabric based on the designs of Edouard Benedictus, which had been created from the V  & A collection.  I decided to try to find out a bit more about him and bought the book above to help.  I had also searched on the internet, but there wasn't a huge lot available. According to various websites,  he lived from 1878/9 - 1930 and was an artist, designer and chemist (who discovered and created laminated glass in 1903).  He also created designs for fabric, textiles, upholstery and wallpaper. 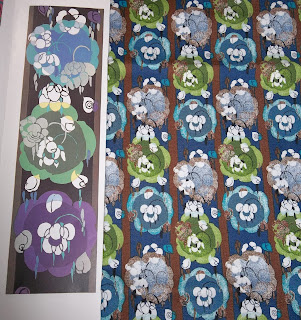 The Benedictus pattern from the book on the left, with the material (Floral Stripe - a new one which I discovered I hadn't ordered, so immediately remedied that!) on the right. 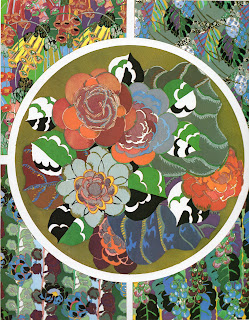 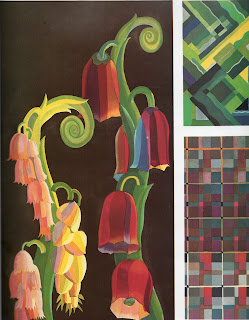 He could also create geometric patterns inspired by the colours he saw. 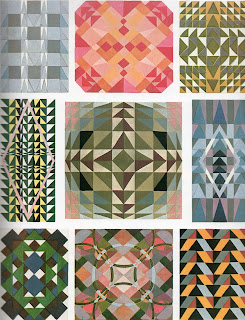 Here are a few complicated geometric patterns he designed.  To me, they predict Bridget Riley's Op Art, but 30 years before she was designing.  These designs above date from 1924, 1926 and 1930.  According to the editor, Charles Rahn Fry, of the book:
Edouard Benedictus was one of the outstanding artist-designers of the early twentieth century.  Productive from 1900 - 1930, Benedictus witnessed and was magnificently influenced by, the revolutionary developments in European art and design - Art Nouveau, Cubism and Constructivism among them.
Why has it taken me this long to discover him?
Posted by Ellie Foster at 15:48