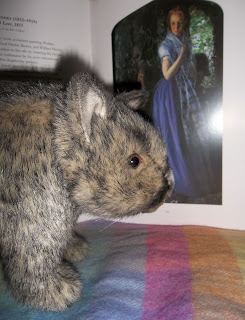 Yes, I know, this is rather an odd title for a post.  I blame Kirsty at The Kissed Mouth and Stephanie at Pre-Raphaelite Sisterhood for making this such an irresistible idea!  I am supposed to include cake on Wombat Friday too, but have failed at that part.  Still, I have got a toy wombat (who is really sweet and is nameless at the moment) and a Pre-Raphaelite painting.  Now before you all click away, shaking your heads and thinking "She's flipped!", a wombat was one of Dante Gabriel Rossetti's favourite animals and he had a real one.  In case you are not familiar with Mr Rossetti, he was a Victorian artist and poet and one of the founder members of the Pre-Raphaelites.  I love their work and their draughtsmanship was phenomenal; in my opinion, they created some of the most beautiful drawings of women ever made. 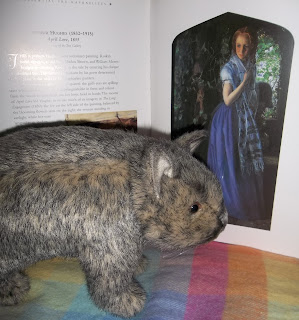 I have had a long relationship with the Pre-Raphaelites; I first saw April Love by Arthur Hughes (in the background) in a book in the school library when I was about 16, I think, and from then on, have been a huge fan.  I was lucky enough to go to the major Tate Exhibition in 1984, which made a big impression, as it was so full of vibrant colour.  The early works are known for this vivid colour and extreme realism and it is difficult to find reproductions which do the originals justice.  In reality, the purple of the girl's dress is stunning - a wonderful mixture of lilac, purple, blue.
I have since collected (and am still collecting) many books about them - both the artists and their wives and models - and find more and more fascinating information out about them.  I have always enjoyed social history and have a particular love of the Victorian age.  The women involved in the group and those who were influenced by them also hold a fascination for me.  Who were they? Where did they come from? What happened to them?  I have enjoyed being able to find out.
So, here's to Wombat Fridays - perhaps I may not be able to join in every week, but I'll do my best.
If you are interested in the Pre-Raphaelites, both of the above mentioned blogs are excellent.
Also, a huge welcome to my recent new followers - I hope you will enjoy reading my blog.
Posted by Ellie Foster at 21:55