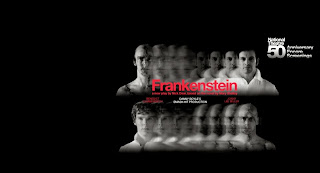 On Monday night, Chris and I went to our local Odeon cinema to see the National Theatre production of Frankenstein, starring Benedict Cumberbatch and Jonny Lee Miller.  They swapped the roles of Victor and the Creature each night in the original run.  The productions were filmed and cinemas have been showing the films now and again over the last couple of years.  It was an amazing production and the two leads gave really powerful and exciting performances.  I really don't know how they managed to keep going on the original run, as the Creature, in particular, demanded  huge reserves of physical strength and agility.  It was moving, sad, funny, clever and disturbing.  I read the book last year and was stunned by it - not just the story, but by Mary Shelley's writing skill.  It is such a powerful story about rejection, prejudice, love, power and revenge.
The production we saw was with Benedict Cumberbatch as Victor and Jonny Lee Miller as the Creature and I am so pleased we saw it that way round, as to me, it worked perfectly.
The set was very clever and had a minimal feel, which I really like as I enjoy using my imagination, but in fact, I didn't need to very much, as everything that was needed was there.  The lighting really complemented the different parts of the story and action and the music was particularly effective.
I was a little concerned that the audience would be the typical cinema audience, with all the noise they make, but in fact, everyone was as gripped by the film as we were and you really could have heard a pin drop.  It was a wonderful evening.
I think that there are going to be more films like this as there was a trailer for Ballet, Shakespeare and Opera productions too.  It is something I shall keep looking out for because it means that you can still see productions even if you can't actually get to the original live one.
(Photo from National Theatre website)
Posted by Ellie Foster at 16:16