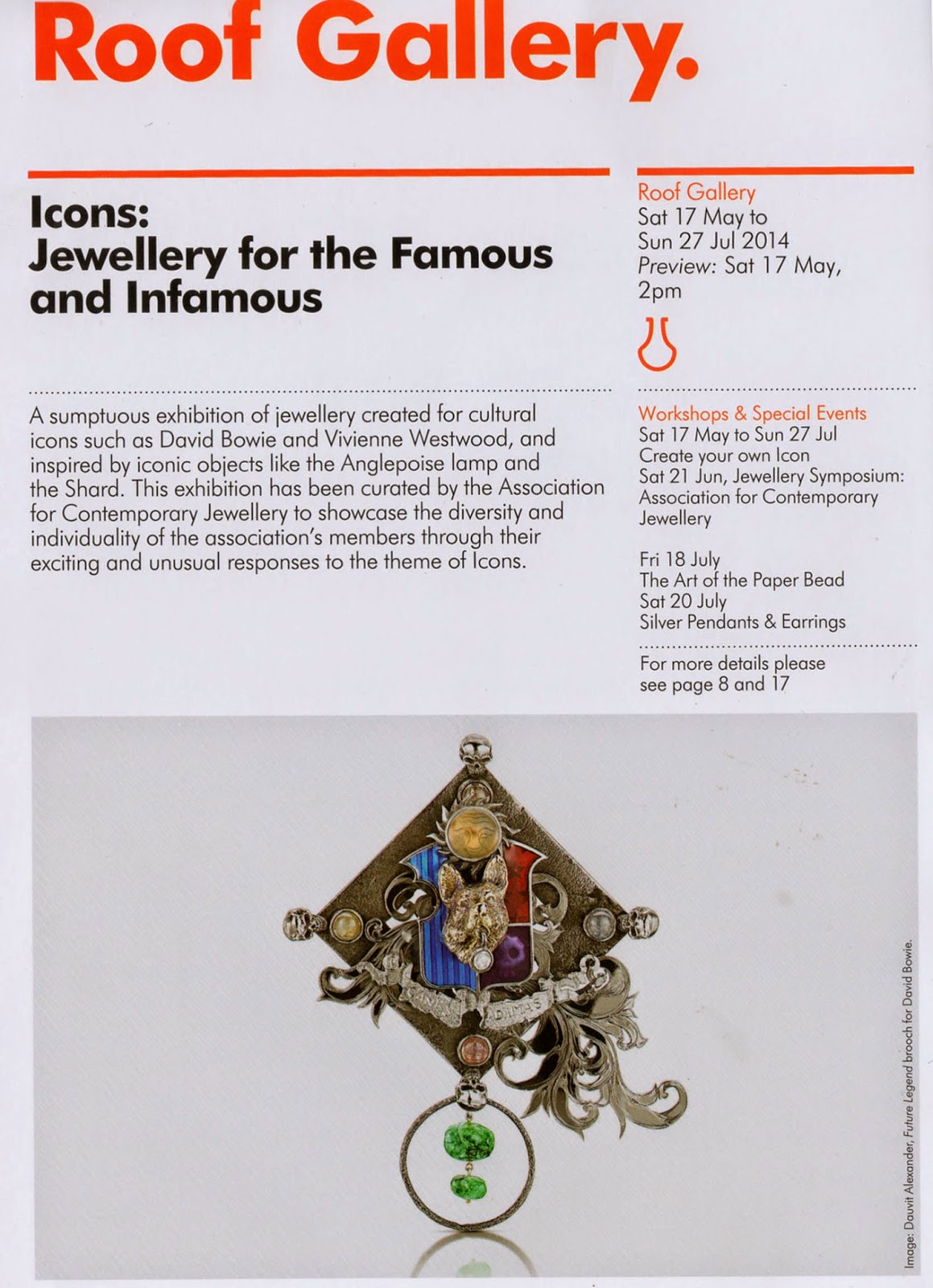 Last Saturday, we headed to the National Centre for Craft and Design again, to look at a jewellery exhibition called Icons.  It was an interesting idea - jewellers were asked to create a piece for a person or thing that they considered an icon. I was allowed to take photos, which is always a bonus. 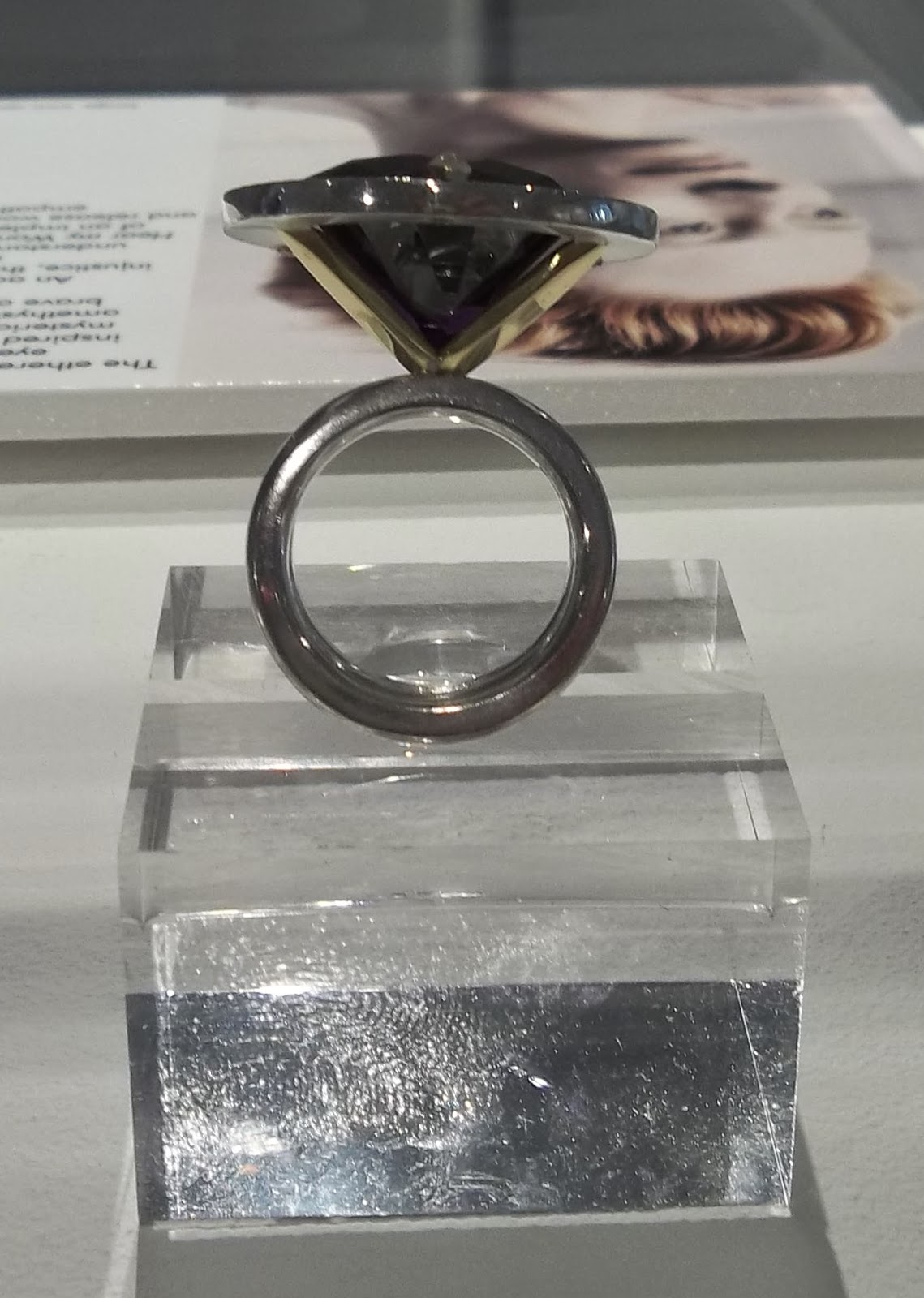 This amethyst ring and the moonstone necklace in the next two photos were designed for Tilda Swinton and capture her cool, detached, ethereal quality very well, I feel. 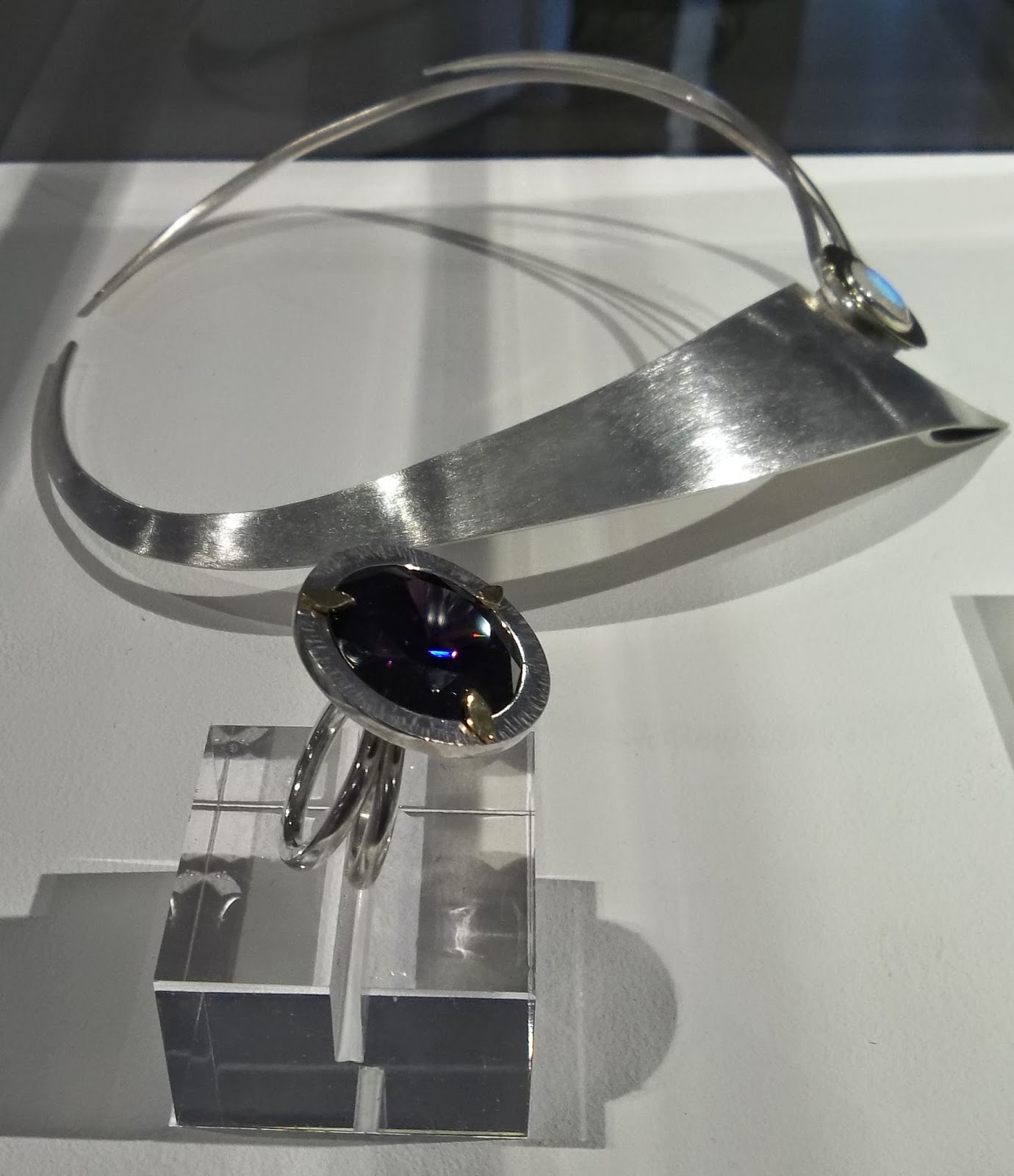 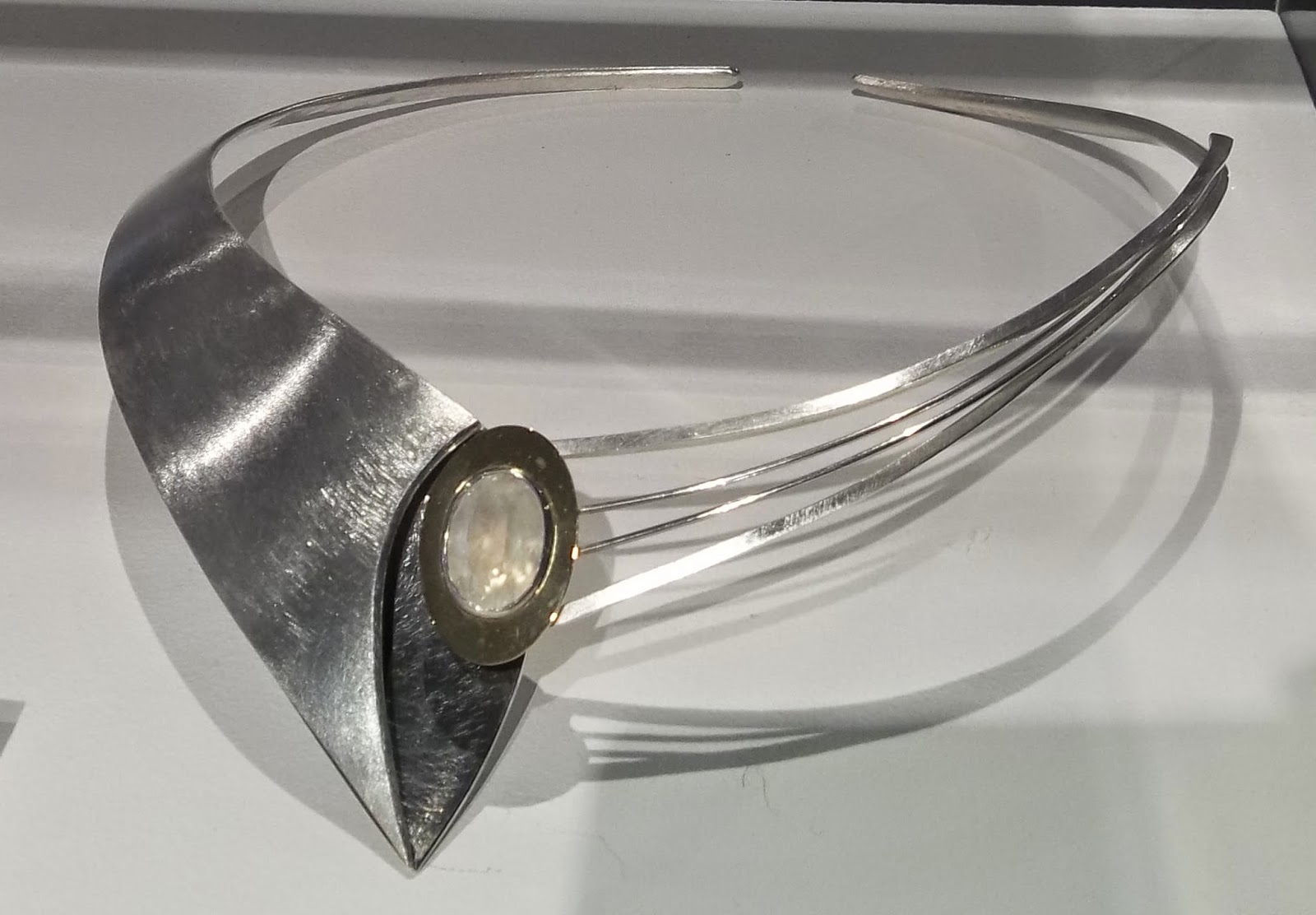 I loved the sweeping curves of the moonstone torque neckalce. 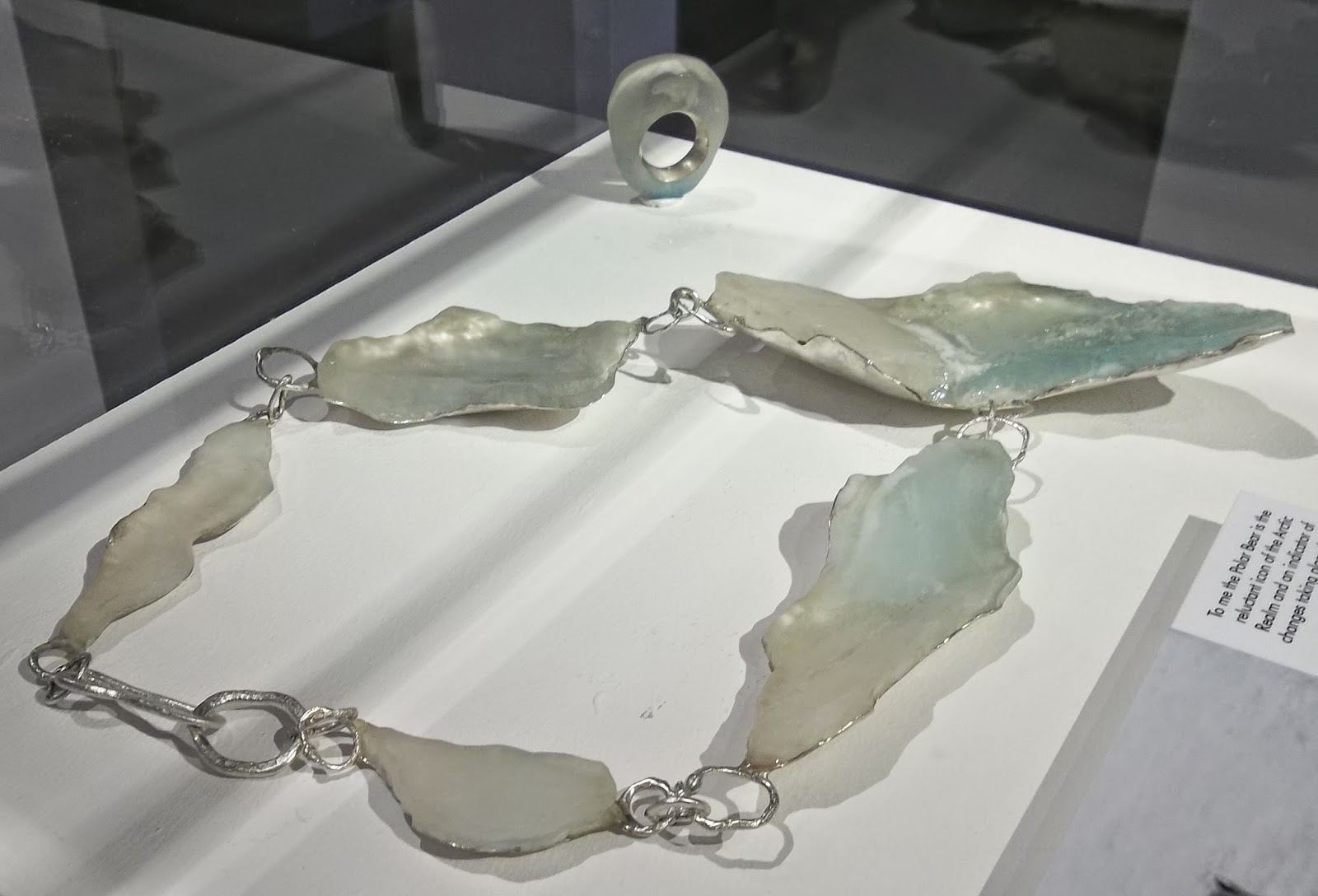 This necklace and ring set was created for a polar bear.  The jeweller used resin to create the icy arctic blue. 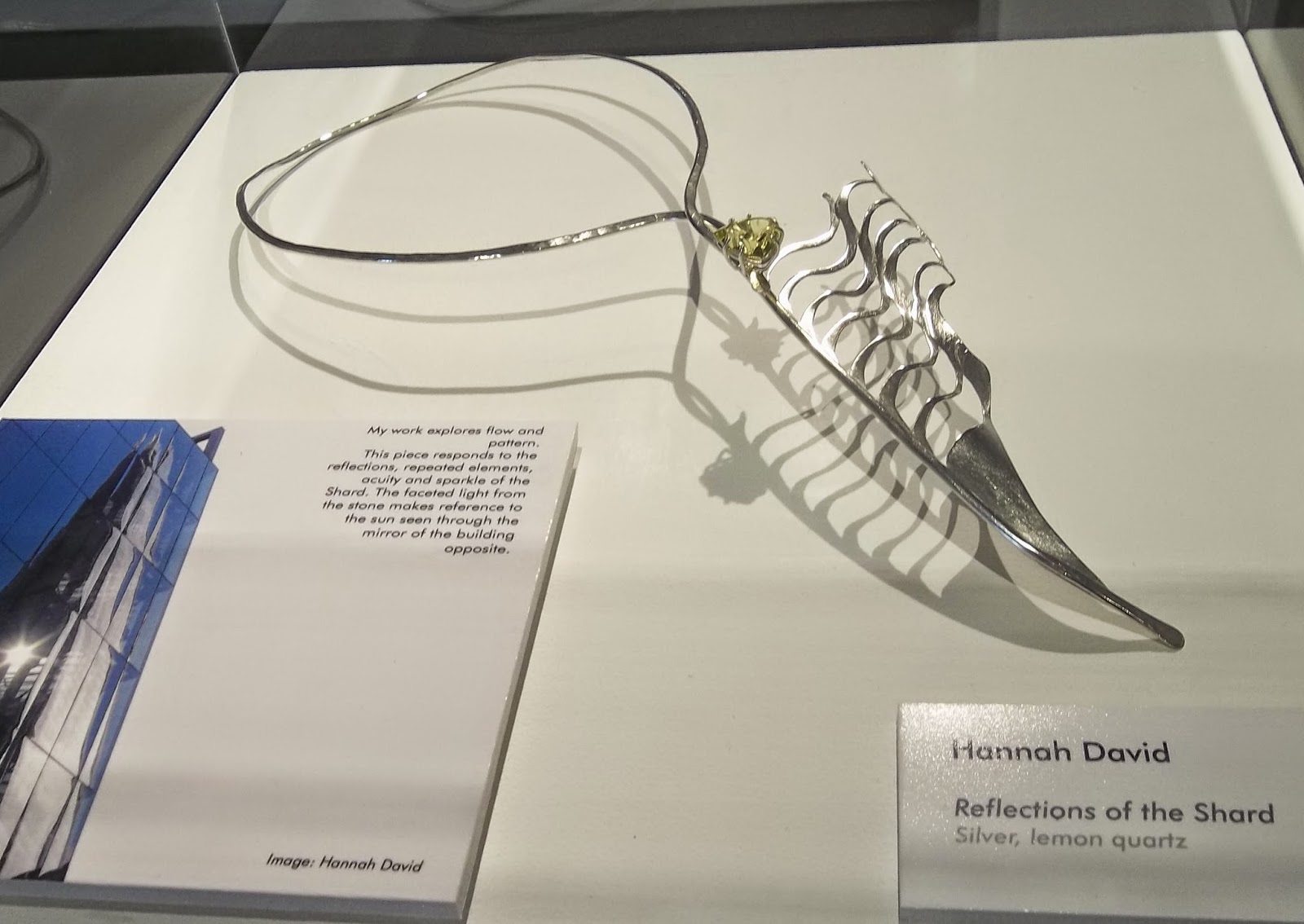 Chris and I both liked this one, inspired by The Shard. 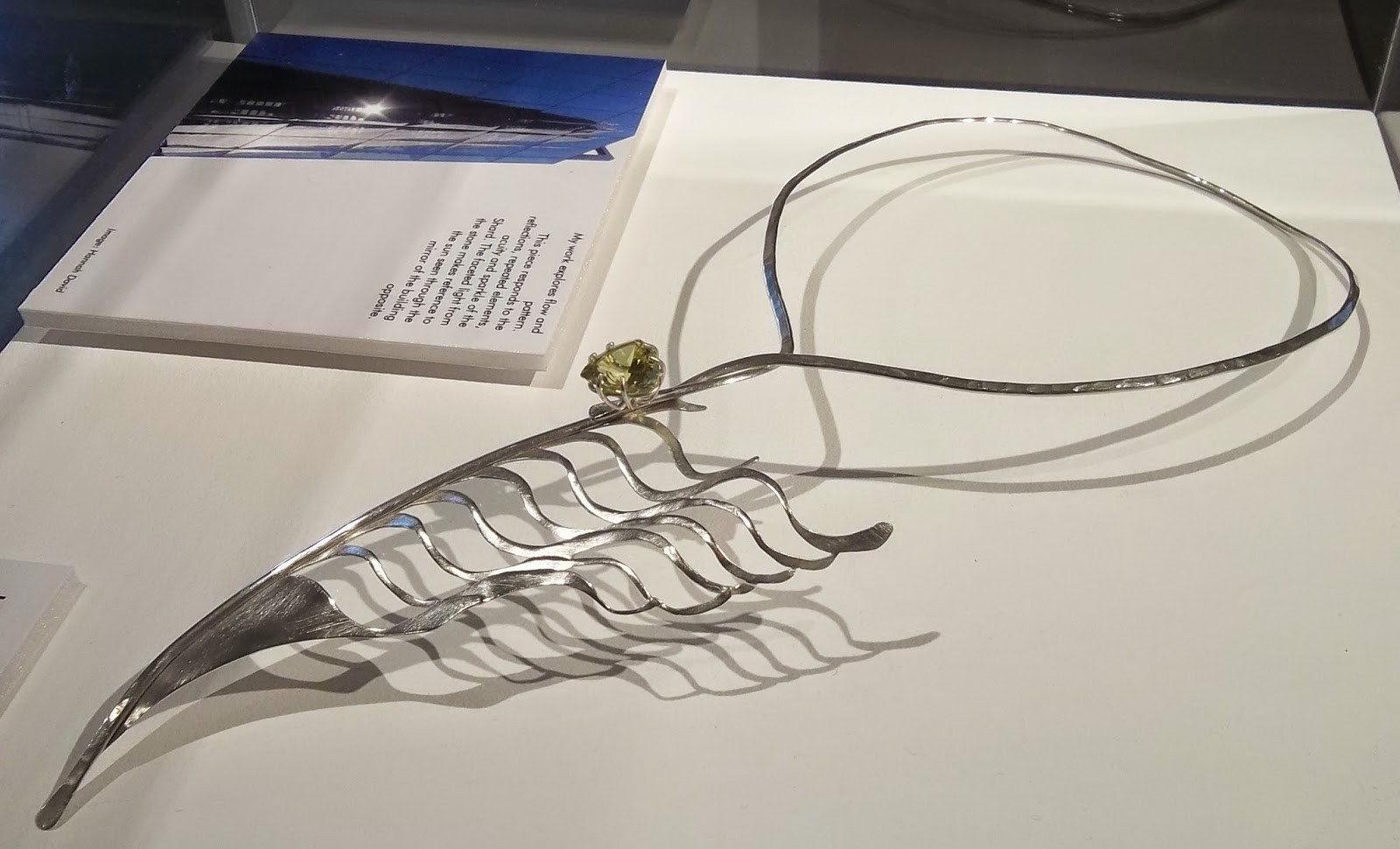 Again, there was a great sense of movement in the design. 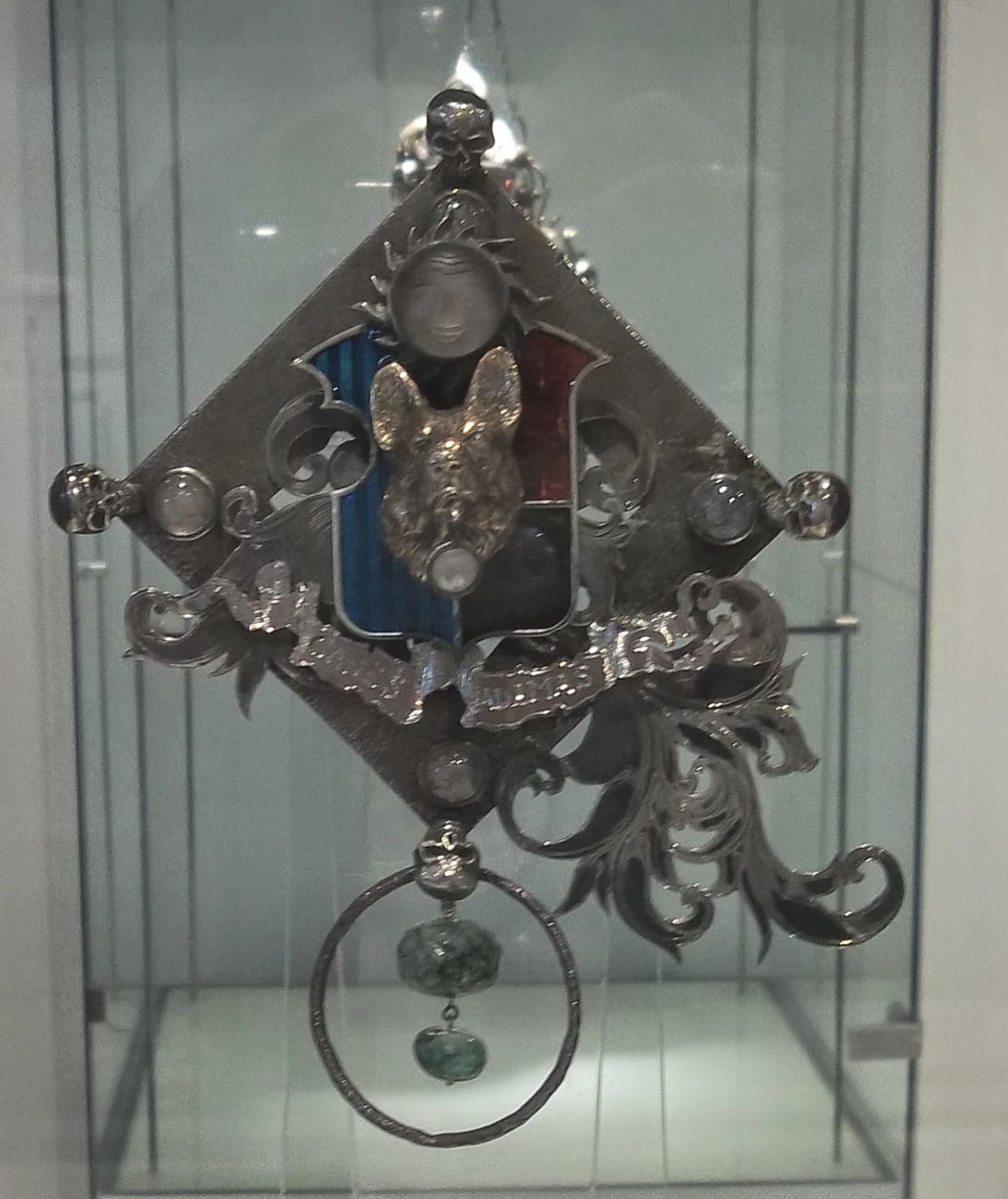 The complex and impressive piece was designed for David Bowie's 'Diamond Dogs' song/album.

The two iron spheres encrusted in flowers and skulls made from lots of semi-precious gems was made for Alexander McQueen. 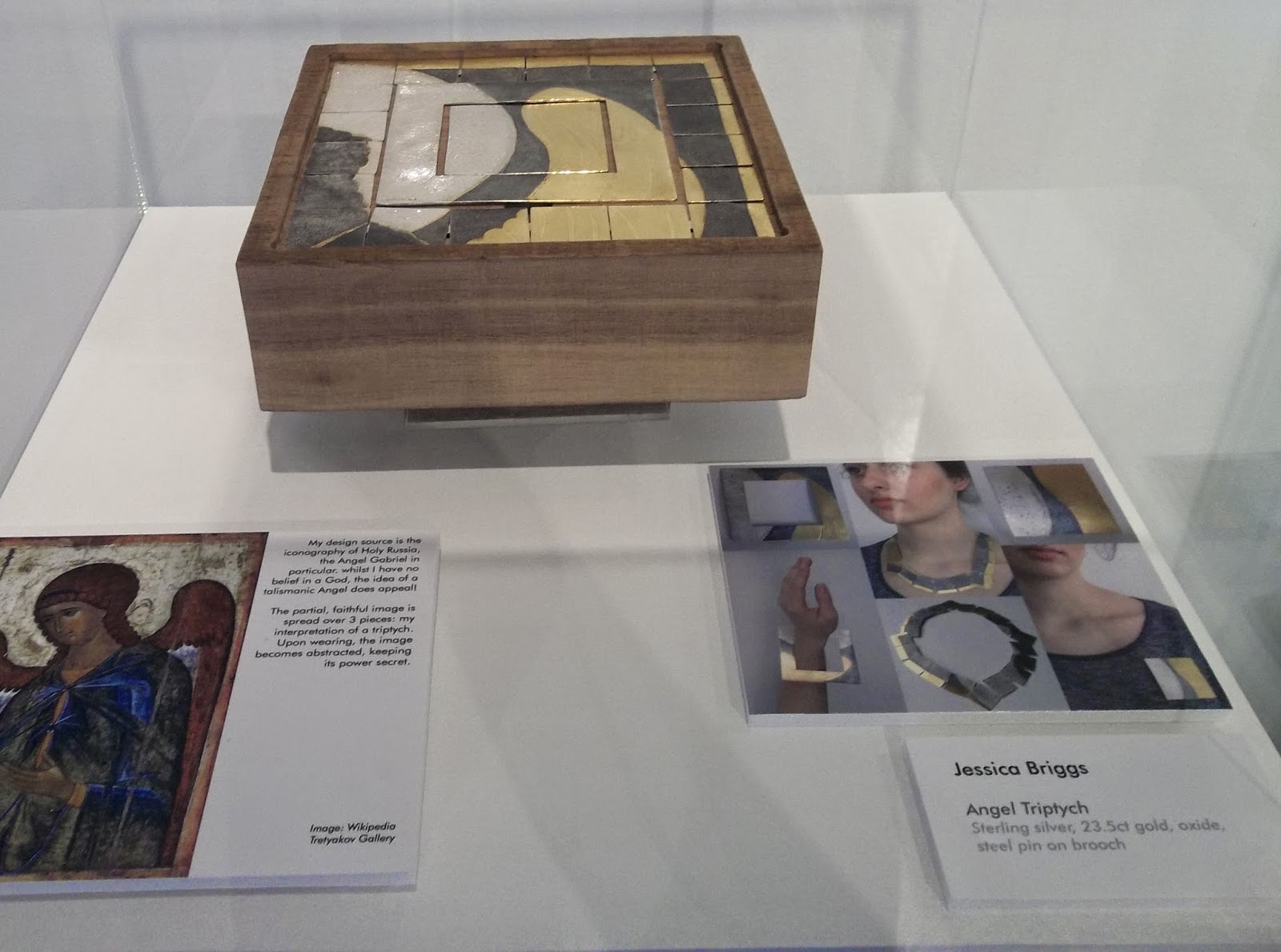 This was another of my favourites as I found the design fascinating.  It looked like a box, but when you looked at the photos, you could see there was a square brooch in the centre, then a square bangle and a square necklace, made up from smaller squares.  Only when the three were displayed together would you see the shape of the angel wings, showing the inspiration. 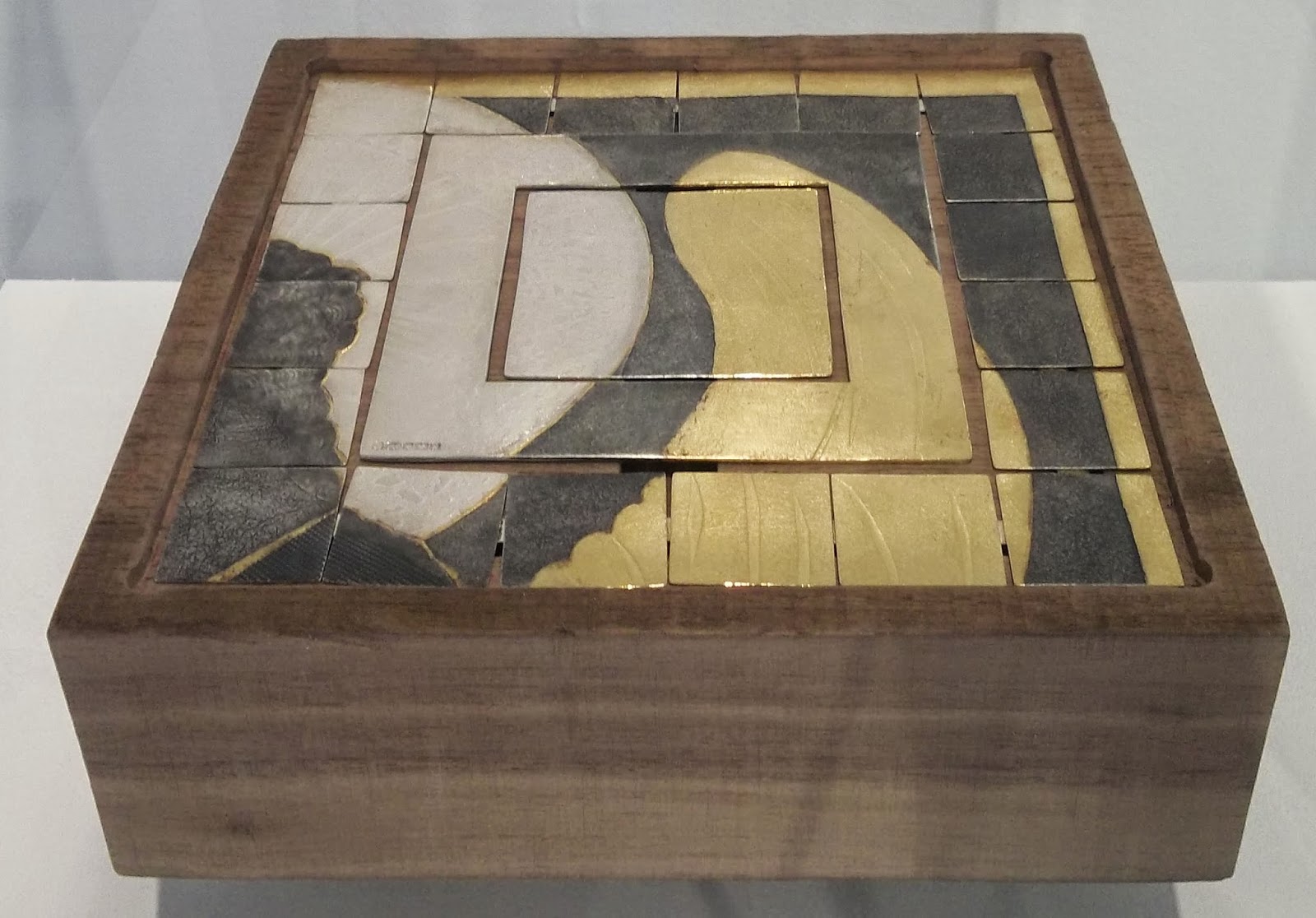 A beautiful thing in its own right. The blues of this piece appealed to me and on closer inspection, the shape of the towers from the Battersea Power Station appeared.

This piece was Chris' favourite - Mary Shelley, author of Frankenstein, was the icon here.

There was a huge amount of attention to detail shown here, from the complex beading to the printed writing on the back of the oval pendant. 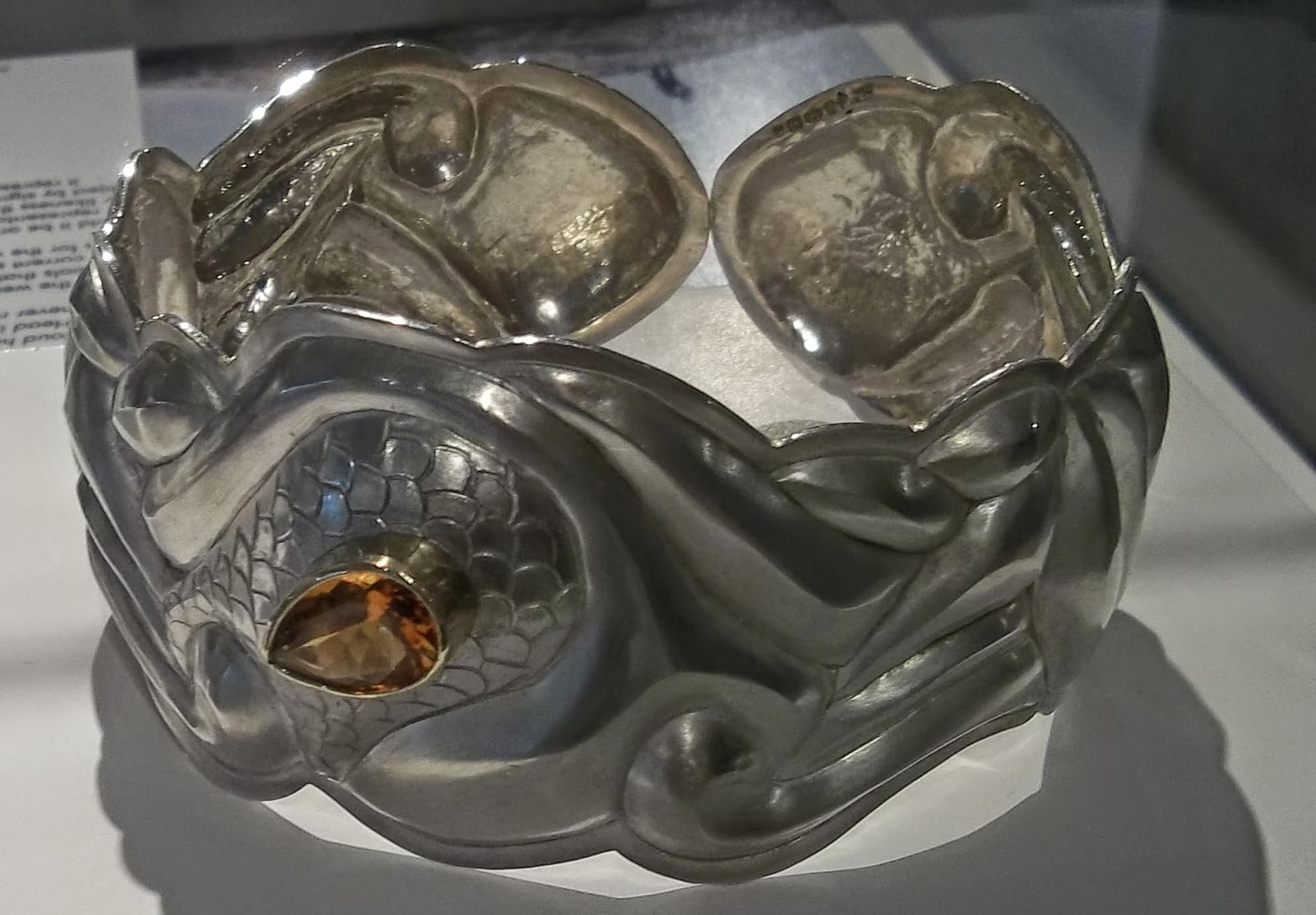 This quite classic looking Viking/Celtic-type bangle was inspired by a female character from Game of Thrones. 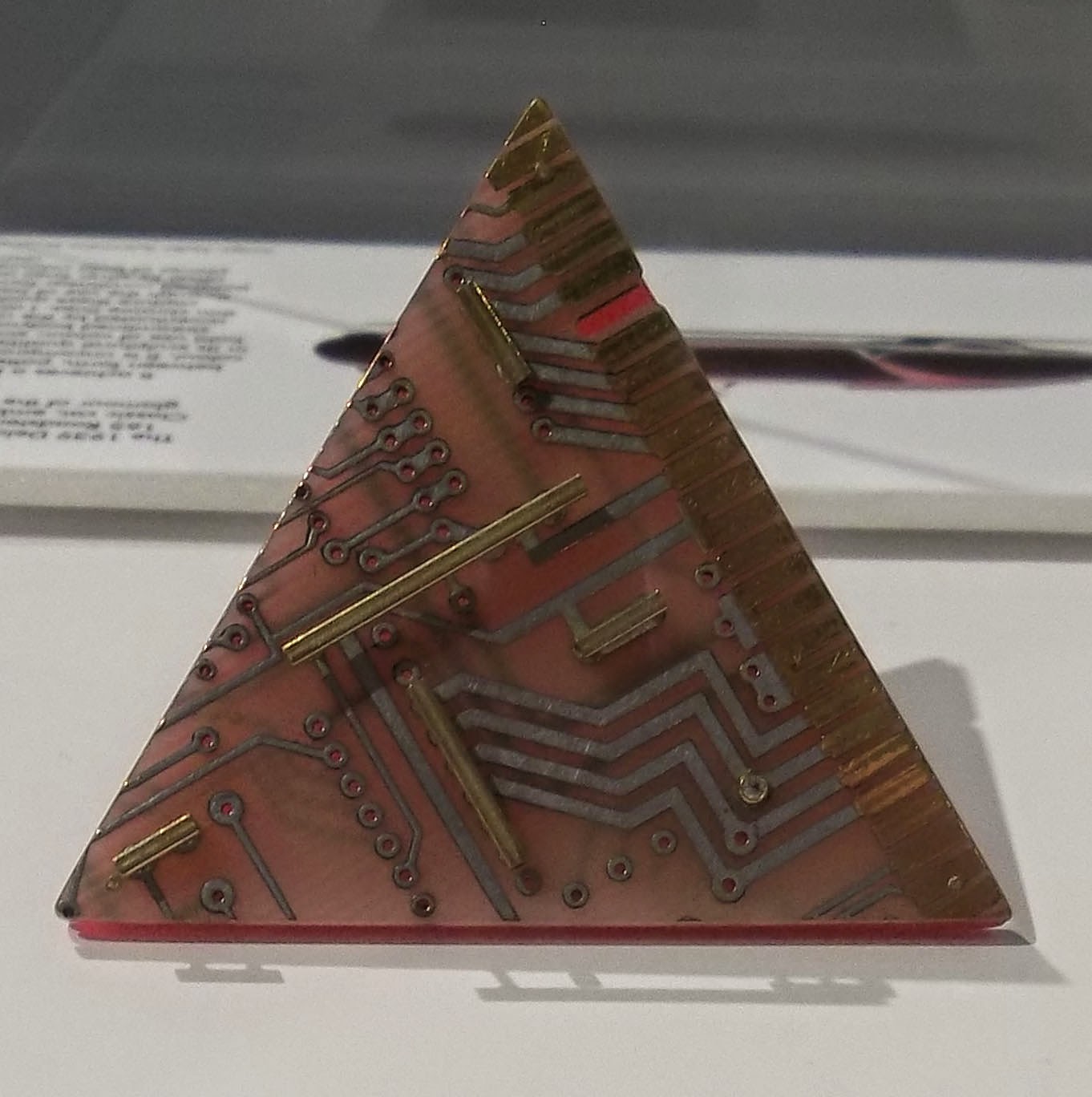 Finally, this simple looking piece of circuit board was designed for Alan Turing, the computer scientist and the jeweller had written that the inclusion of pink referred to the fight against prejudice as Alan Turing was prosecuted for homosexuality and died from cyanide poisoning. According to Wikipedia, he received a posthumous pardon from the Queen in December 2013.
I really enjoyed seeing these pieces - there were many others too, including two for Vivienne Westwood, but the ones I have featured are the ones that appealed to me most.
Here's a little something to think about - which icon would you have chosen?
Posted by Ellie Foster at 21:43