Austentacious - a great night of comedy

We had a wonderful evening last night when we went to see Austentacious at a local theatre.  The cast ask the audience to write down a suitably Jane Austen-like title and then they pick one at random and improvise the story. Each performance is different, although based in Regency time. 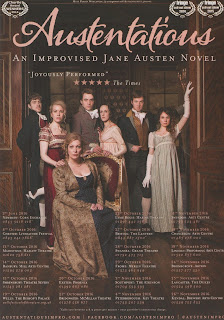 We took along a few options: 'Bags and Baggages', 'Baubles, Bonnets and Bennets' and, my favourite, 'Fans and Fantasies'.  'Fans and Fantasies' was the first one picked from the basket and the speaker described it as Jane Austen's autobiographical account of a 'superfan', who became a stalker - not quite what we had in mind when we thought of it!  The second one was 'The White Faced Lady' which was described as Jane Austen's masterpiece about Elizabeth I.  The third was the one they would perform.  It was 'Mansfield Town Women's Football Club'.  I was slightly worried as it was a football based story (I am not a sport lover), but the cast did a wonderful job and at times I was crying with laughter!
The story revolved around a football club and the attempt by a woman (gasp), Miss Mary Pele, to join the said club.  There was also Eloise, Mary's sister, who was the perfect woman and adored by her father, who found a suitable husband in one of the footballers, Mr Charles Groves.  Mr Groves, it turned out, was carrying emotional baggage (which explained a lot) when he eventually revealed that his parents were killed in a freak accident concerning a huge gust of wind and a bag.  The football club was run by Miss Maria Wemmick and Dr Tamworth - Miss Wemmick becoming another player on the Women's football team.  There was also a villain, in the shape of Lord Abramovich, a wealthy Russian, although he was also possibly Scandinavian and then morphed into German, who wanted to support the male team and would stop at nothing to get what he wanted.  There was a happy ending - Lord Abramovich met the same end as Mr Groves' parents , Eloise found true love with Benedict, (Mr Groves' friend and also a footballer), Mary found love with Mr Groves and Dr Tamworth adopted Miss Wemmick as his daughter.
The cast did a fantastic job and judging from the gales of laughter from the audience, we all thoroughly enjoyed the performance.  The UK tour has almost finished now - just Bromsgrove, Lancaster and Kendal to go.  I would recommend this talented group's performance - funny, clever and witty.  If they tour next year, I will definitely go again.  Here's a link to their showreel which gives a taster of what they do.
Posted by Ellie Foster at 20:42