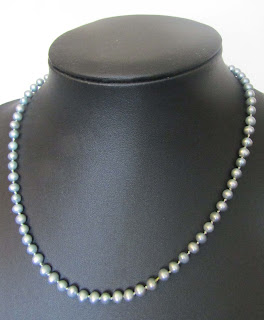 I have been keeping occupied quite well over the last week or so.  Above is a pearl necklace which I re-strung for my mother-in-law as the catch was broken.  It took me several attempts and a bit of choice language to get there.  I have decided I need to practise with the pearl knotting tool,which, when I have got to grips with it, will make the whole process so much easier. When the necklace was strung before, it was knotted in groups of six pearls.  I have re-done it with one pearl then a knot.  It means if it does break (I hope it won't), only one pearl will be lost and it also keeps the pearls from rubbing against each other.  It does look nice now. 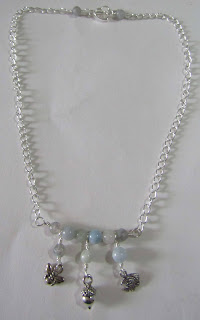 In another jewellery project, my friend Rachael asked if I could make her a necklace for her birthday incorporating three charms she had been given.  I had a bit of a think and came up with this design. 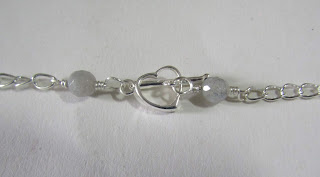 I used wrap loops to join all the parts together for added stability and longevity. 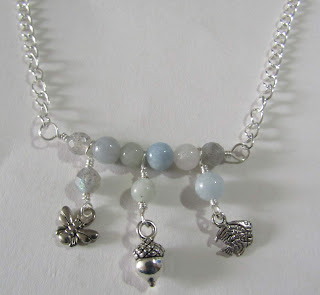 I chose aquamarine, jadeite and labradorite as the gemstones and you can see the little charms here.  I made it just longer than a choker length and I hope it will be comfortable to wear. 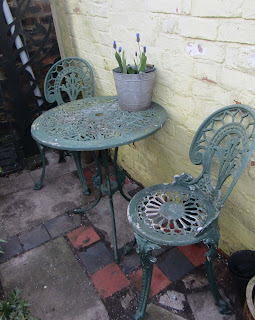 Last Thursday, I decided (on a bit of a whim) to tackle the patio and release the chairs and table from their prison of plants and pots.  They had been at the back of the patio for at least ten years and we weren't able to actually use them.  After a lot of sweeping, moving pots from here to there and re-positioning, we can now sit down.  Of course, the weather has been too cold since then, but they are ready for us.  (They also need a bit of TLC and repainting, but that's for another day.) 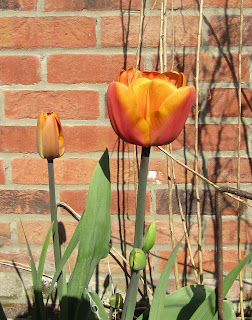 Finally, here's tulip Brown Sugar again, enjoying the sunshine, when we have had some.  It does complement the brick wall, I think.
Posted by Ellie Foster at 20:02