The Vagaries of Nature 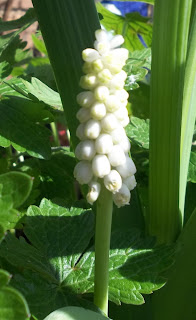 Anyone who is unfamiliar with England might wonder why we are all so obsessed with the weather.  After all, it happens, and there is nothing we can do to control it.  However, it is a peculiarly British trait.  The last two weeks illustrate this perfectly. Last week it was sunny and hot, with summer temperatures.  The farmers were worried about their animals and crops and gardeners were concerned about their plants.  A hosepipe ban was issued (starting tomorrow) in the worst affected places.

For the last two days, it has been raining fairly steadily.  In Scotland and North England they have had snowstorms, blizzards, power cuts and it is all really miserable for them.  Yes, the weather people predicted it, but funnily enough, we still seem to have been taken by surprise. The reason we are all so obsessed with our weather is because it changes so much!
Why, you may be asking, has she illustrated this minor rant with photos of a white grape hyacinth?  Well, I haven't planted any white grape hyacinths, so how has this white one suddenly appeared in the garden?  As you can see, I took the photos while it was still sunny.  Sometimes the vagaries of nature cause us worry and create havoc and then at other times, we get a little reward that makes us smile.
Posted by Ellie Foster at 18:29