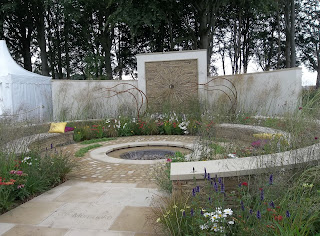 This was my first visit to Tatton park, which is situated just near Knutsford in Cheshire.  (I think Knutsford was the original inspiration for Cranford by Elizabeth Gaskell, although we didn't actually see much of Knutsford itself).  We had a very scenic drive across the Peak District and really enjoyed the landscape, although the journey took us 2 and a half hours - if we had used the motorways, it would have been quicker, but we wouldn't have seen the landscape.  I went with two friends (Katy and Alison) who I used to work with and my sister-in-law (Kathryn), all keen gardeners.   Above is the Mornflake garden which had lovely dry stone walls and lots of movement from the grasses.  I think it won best in show for its category, which was not surprising. 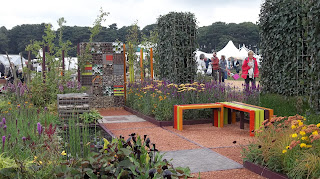 I think that Tatton has a more 'country fair' feel than Gardeners' World Live in Birmingham.  It was much more open and much less frenetic.  There was a huge amount to see and even though we thought we'd managed to see everything, when I watched the TV coverage, there were gardens they focused on that we missed.
The garden above had a great shot of colour and I was particularly taken by the sculpture/wildlife home wall at the end. 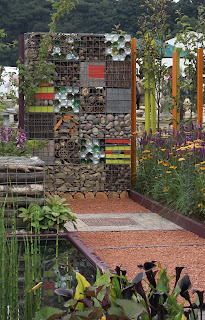 I couldn't resist a close up of it. 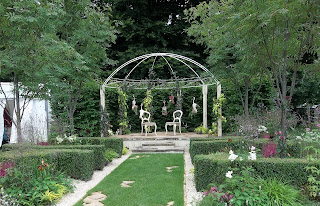 This garden in the 'Orchestra' section was right up my street. I can't escape the inevitable - the traditional English Cottage garden is the style that appeals to me most.  Roses, clematis, cottage garden perennials, box hedging and somewhere to sit, which this garden 'Air on a Green String' gave an impression of, albeit a slightly grander one - more like a country house garden. 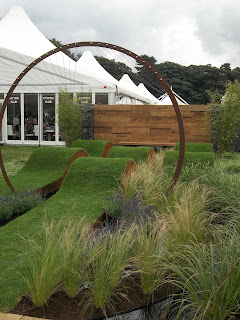 Another of the 'Orchestra' gardens and a complete contrast.  Called 'Strings', it was clever and sophisticated, with restrained planting that worked very well to convey the movement of the string vibration. 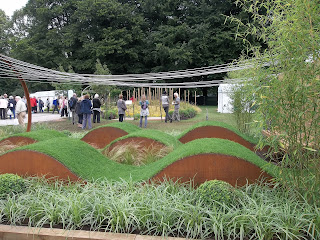 Here it is from the side, showing the undulating pattern made by the grass. 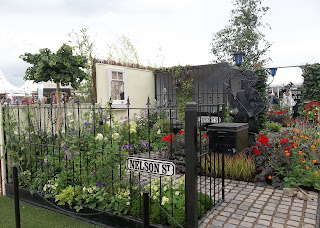 The Suffragettes' garden was also clever,  with references to chaining to the railings, setting post boxes on fire and broken windows, but with some lovely pastel planting in the left corner.  The motto of the Suffragettes was on the wall - Dignity, Purity, Hope. 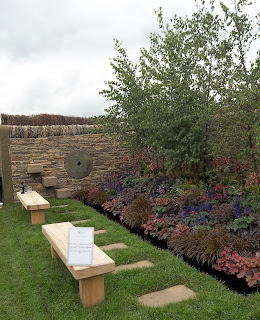 This garden aimed to give a vision of the Peak District through the year, incorporating the changing colours and with a lovely bit of dry stone walling at the back.  It also won an award. 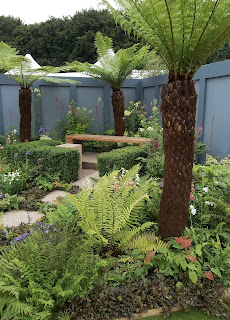 This shade garden was beautifully planted and had a lovely granite block which echoed the box bushes and a simple but elegant bench. 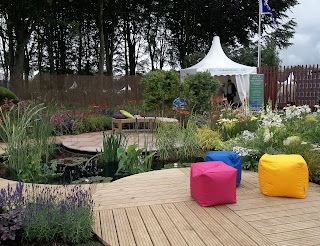 I liked the blocks of strong colour provided by the cube seats in this garden, and the areas of different colours of planting - pale purples and blues, whites, greens and yellows with reds and deep purples at the back.
More in my next post...
Posted by Ellie Foster at 09:32