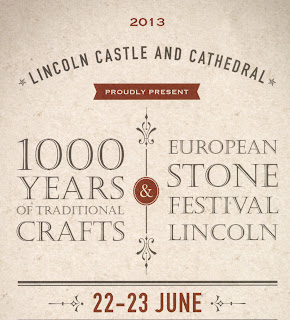 There was a craft weekend at Lincoln Castle and Cathedral, so Chris and I thought we'd head along and investigate.  The craft part was in the castle and we went there first.  There were quite a few traditional crafts on display, including stone carving, felt making, knitting, net making, blacksmithing, wood turning, spinning, tile making, basket and hurdle making, using dyes and stained glass. 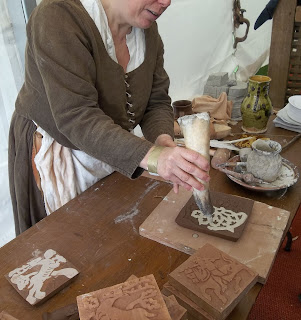 This lady was full of information about how these tiles were made and how they are in the process of creating thousands to be used in the restoration of a floor in Dudley Abbey (I think that is where she said).  She carves the woodblocks herself, using a variety of woods and then the woodblock is pressed into the clay tile to create the pattern.  The impression is filled in using slip, contained in a cow horn.﻿
﻿ 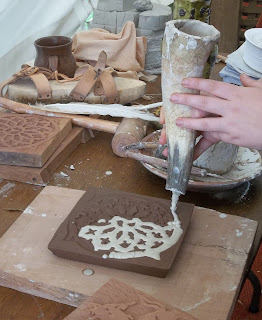 This was a visitor trying her hand at the infilling.  She did really well, I thought. 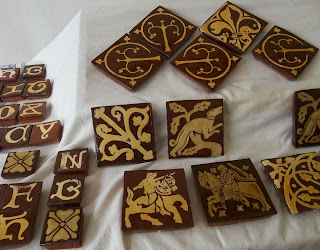 The infilled tiles are then fired and this is what they look like when glazed. Fabulous! 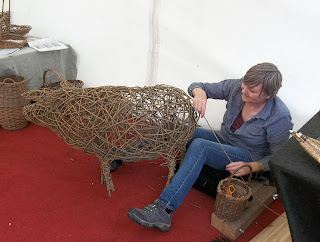 I was rather taken with this willow work pig!  In fact, I was so busy looking round, I forgot to take many photos.  I am considering applying for a stall with my felt making next year and am currently contemplating how I could actually demonstrate the process as well. 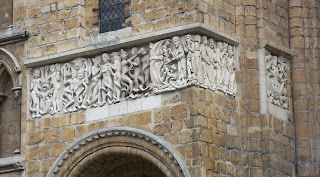 We wandered past the cathedral, noticing various new carvings which have be done to replace damaged ones. It is an on-going process. 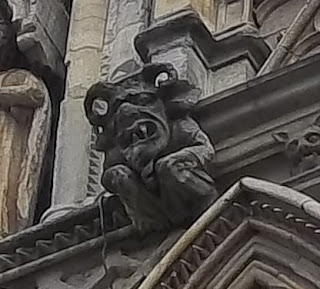 Chris really liked this little gargoyle, which he said he hadn't noticed before. 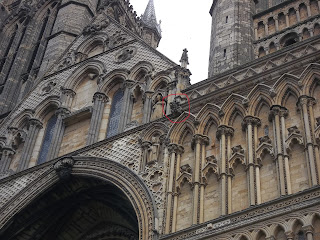 This is where the gargoyle was - if you click to enlarge the picture, hopefully you can see him circled in red. 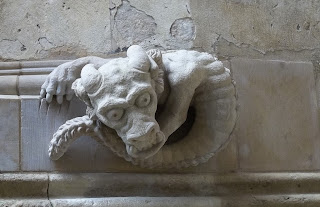 One part of the cathedral has been closed off and under conservation/restoration for seven years.  Lots of new carvings had been created, including these two.  This dragon was my favourite - I love the way his claws have marked the stone. 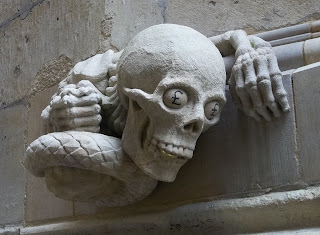 Chris liked this one - note the pound signs on his eyeballs, the gold coin between his teeth and the way he is clutching his money bag.  'Love of money is the root of all evil' perhaps? 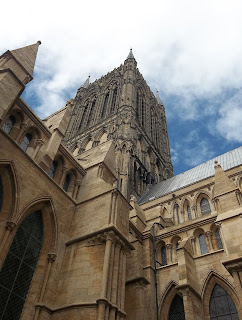 This is the section that has been worked on - sparkling clean! 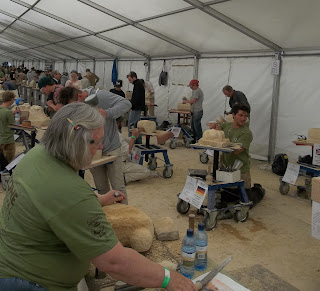 We continued round to the East Green and there was a large marquee with lots of stone masons from across Europe busily chipping away.  The noise of chipping and tapping was incredible!  There was also the added excitement of trying to dodge the flying chips of stone but the atmosphere was wonderfully energetic and creative. There were many different examples of stone and several pieces had been donated by different cathedrals such as Lincoln and York. 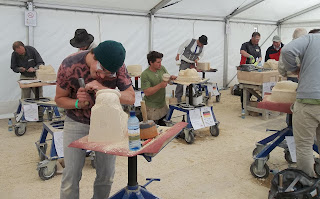 It was heartening to see the wide variety of ages of stone masons taking part and there were several women there too. The idea was to carve something on the theme of Food and Farming over the two days and then the work would be auctioned on Sunday. I particularly liked the two or three rabbits/hares that I noticed while looking round.   Unfortunately, we weren't able to see the finished work, but I hope the auction was really successful. We certainly enjoyed seeing the work in progress.
Posted by Ellie Foster at 13:46