Ned, Top and me - an unexpected meeting

At the stone masons' festival on Saturday, there was a tent which showed all the conservation and restoration skills from the Cathedral workshop, including joinery, lead work, stone carving and stained glass.  I was having a wander round when some brightly coloured Victorian-looking stained glass caught my eye.  Two panels of a window were shown and the window was originally in St Mark's Church, Lincoln, which was built by William Watkins in 1871-2 and demolished in 1971. 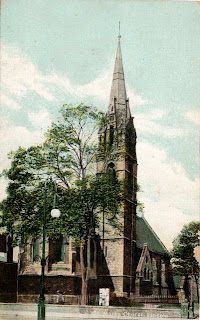 A coloured postcard of St Marks Church, Lincoln (I think) from  www.slha.org.com
I read the accompanying information and could hardly contain my excitement!  The windows were from a design by Edward Burne-Jones (Ned) and made by Morris (Top) & Co. Anyone knowing my love for all things Pre-Raphaelite can imagine how I felt, coming face to face with these in such an unexpected way. However, on reading further, I discovered that they were made around 1921 and it was Dearle, the then principal designer, as Burne-Jones and Morris had died by then, who actually made them.
The windows had been saved, albeit in a rather sad state and had been in the Cathedral stained glass workshops since 1971, never having been displayed since then.  The stained glass workshop craftspeople are now starting to restore them and the plan is to then find an ecclesiastical home for them, possibly even in the Cathedral.

Apologies for the photo - the light was all wrong!  This is the unrestored state of 'The Virgin Mary', dirty, with large chunks missing and unstable lead work. 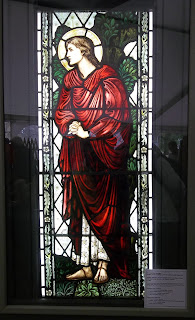 The restored panel of 'St John', showing the whole image in gleaming colour. 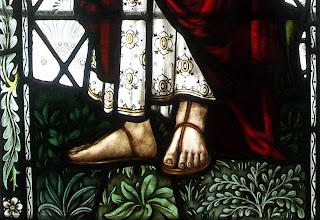 I particularly liked the floral patterns.  However, I was leafing through the biography of Burne-Jones by Fiona MacCarthy, 'The Last Pre-Raphaelite' (details here), and she mentions this type of window, created from Burne-Jones' designs from 1914 onwards:
Burne-Jones would not have approved of these late windows.  The colour is much cruder than he or William Morris would ever have allowed. There is the heavy mass of foliage and incidental detail Henry Dearle, still Morris & Co's principal designer, could not resist (p.523).
I still think it is beautiful though. 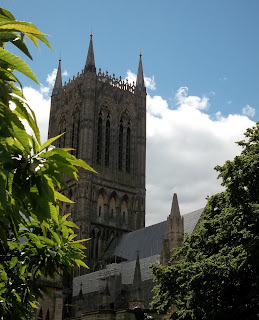 Another photo of the Cathedral, for no other reason than the sun was shining and it looked beautiful.  Perhaps the restored windows may one day be seen somewhere in there.
Posted by Ellie Foster at 12:01