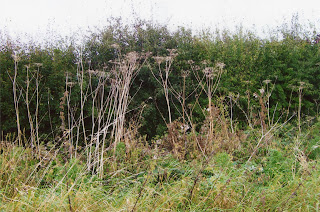 I have made a little progress this week, but not as much as I would have liked.  I have been really busy at work and have only just got around to writing Christmas cards!  Decorations will be going up in the next couple of days, I hope.  So, enough excuses, what have I done?  I looked at the original photo and then did my trick of using a scanned image to draw the design on.  Unusually for me, I only drew one design.  I used a white pen as the background was so dark, so that I could see what I was doing, but the stitching won't be in white - I'll use the photo for inspiration in choosing colours. 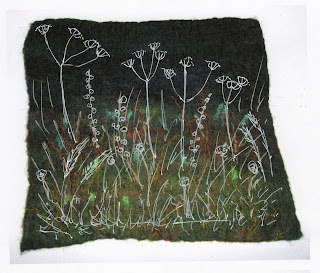 Here is the design, which I am really happy with.  It will probably change as I start actually stitching,  but I am hoping to keep the busy feeling of all the grasses at the front.  I am intending to have some dandelion-type things in the mid ground and some more detailed feathery grasses as well.  I think the stitches will be relatively simple; stem stitch, split stitch, seed stitches, perhaps satin stitch (or a variation on that), couching and french knots.
So, as you can tell, although I haven't stitched yet, I have been doing lots of thinking and decision-making. Now I'm ready to start the stitching, I think!
Posted by Ellie Foster at 21:22