An evening with Ben Aaronovitch 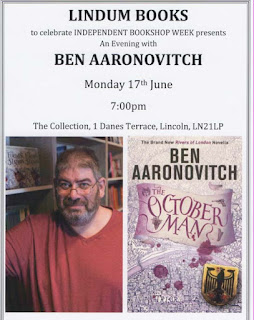 Last Monday evening, we spent a very pleasant one and a half hours in the company of author Ben Aaronovitch (The Rivers of London/Peter Grant series).  He is a large man, both in physical presence and personality.  For those of you not familiar with the Rivers of London series, they centre around the Metropolitan Police in London (usually) and various departments therein but with a magical twist, including River Gods and Goddesses.
He talked about the spin-off series of novellas, of which The October Man is the first.  There are three more to come, so far, one about Abigail, one about Agent Reynolds and one about Nightingale (in the 1920s).  However, an audience member did suggest one about Lady Ty, which he said he hadn't considered before, so you never know.
He talked about being a writer:


He also advised would-be novelists to read the book 'How not to write a novel' by Howard Mittelmark and Sandra Newman.
Apparently, the character of Peter Grant was originally going to be female, called Simone, but then 'Peter' just strolled into view, fully formed (with a chorus of heavenly voices) and that was it.
Of course, all of this was from Mr Aaronovitch's experience and also illustrated with many an anecdote about the publishing world/writing/scriptwriting.
I have read the Rivers of London series and enjoyed them - the next one is due in November 2019 and although he didn't give much away, he did say that the story wouldn't be going where we necessarily thought it would. He also mentioned 'children' (plural) too...
Posted by Ellie Foster at 12:39