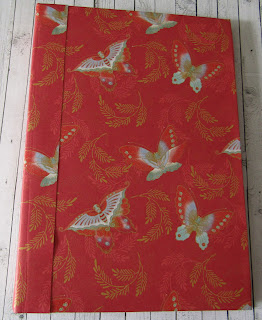 Anyone who makes things using dies and a die cutting machine knows how easy it is to lose small dies.  They get cut out, put down on a table and then are lost under a pile of other crafting paraphernalia.  Companies have made special easel folders to store these, but I didn't want to spend any money on one, no matter how useful it was.  I thought I could just get a piece of magnetic sheet and use that, at a push.

I was looking at Youtubers I follow and saw this one when Ann from Positively Papercraft was making the very easel folder thing (Laminated Easel Desk Top Die Folder) I was needing.  I watched and then went off to make my own.  Mine is a little smaller, but will be so useful!  It's made like a easel card  and has thick cardboard for the covers. 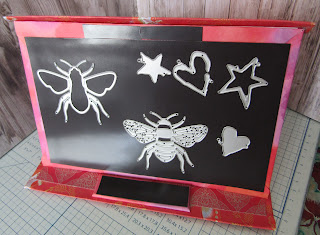 Here's what it is designed for - to keep hold of the little dies so they can't get lost under a mountain of other stuff.  It works beautifully and the only cost was the magnetic sheet. Great idea, isn't it? 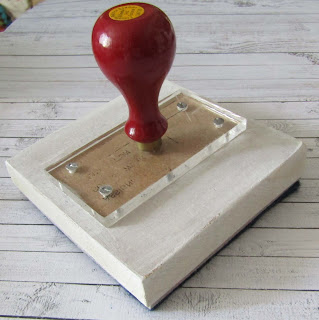 My other new tool is a stamp pressing tool. It is used with a stamp pressing platform, to help to spread even pressure across the stamp, particularly the bigger ones.  It works a bit like a printing baren does.   I have seen them on etsy (called 'Debby tools') in America.  I looked into buying one but the costs were prohibitive (£36 for the tool and £41 for delivery to the UK!). 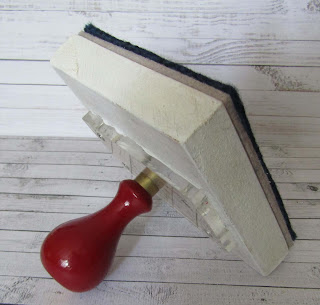 I showed a picture to Chris and  he has made me one.  It's an mdf block, with an old stamp handle attached above. I was going to go with a door handle, like the Debby tool, but he had this one, so we thought 'use what you have'.
We bought some self adhesive felt, the sort that you can put under furniture to stop it marking the floor/other furniture and then I added an extra bit of my own felt on that. There are other options for a home made version, but I thought this would be the best for me.
I painted it with gesso and I thought that was it.  However, I was looking at it today and thinking it looked a bit plain...yes, you know what's coming next... 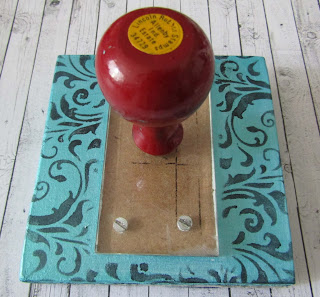 Here it is now, acrylic paint base and then stencilled. 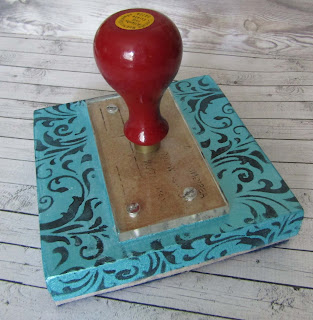 Much better, don't you think? It works really well, applying an even pressure to the stamps. Two new tools, not costing much but they will be really useful.
Posted by Ellie Foster at 16:22