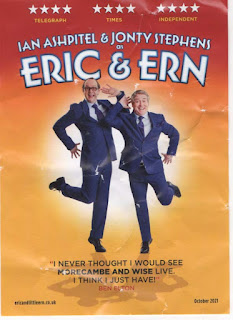 After a long time, we ventured out to the local theatre for an evening of laughter courtesy of Eric and Ernie.  Of course, this was a tribute to Eric Morecambe and Ernie Wise, but the actors are very skillful and you could almost believe they were the real twosome.

For people of a certain age, Eric and Ernie conjure up lots of happy memories - the paper bag, the plays 'wot I wrote', the humiliation (in a nice way, if there could be such a thing) of the guest stars, the musical interludes (Mr Preview), the ice cream van, Bring me Sunshine...

We had a good evening.  They were on form and the actor who played Ernie, (I would imagine, much more difficult to get right) really showed that slightly pompous persona that he adopted.

It was nice to support live theatre again (even if I did wear a mask).  It was even nicer to have a laugh!