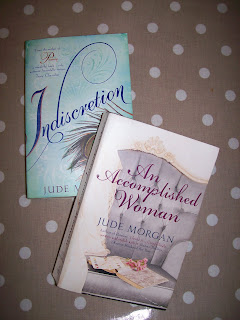 Yes, dear reader, yet another foray into contemporary literature for me. Again encouraged by the same friend who recommended Victoria Clayton, this time, Jude Morgan. The author has written these in the style of Georgette Heyer and Jane Austen, so I didn't feel I could go too far wrong with them. He has also written novels based on Shelley and Keats and The Brontes, but I prefer biographies about real people, so I don't think I shall rush to get those (despite the good reviews). Anyway, I am reading Indiscretion first and am enjoying it. It has a slightly more 'knowing' feel than Georgette Heyer or Jane Austen, and is very definitely a modern view of characters from the nineteenth century, but it moves along at a quick pace and contains lots of humour. I do want to know what happens to the heroine, so that shows that the story has successfully drawn me in!

I found this info about the author:
"THEY say that everybody has a novel in them, but one Peterborough man has proven to be the exception to the rule.Tim Wilson (43), who writes under the pseudonym Jude Morgan, is currently watching his 26th novel, Indiscretion, fly off the shelves – his 27th, Symphony, is due to be published later this year. He read "obsessively" as a child and from an early age he wanted to be a writer. He said: "I learnt to read with Dr Seuss, like most people did. The joy for me was finding the first book that I couldn't put down. It was The Lion, The Witch and The Wardrobe."
Tim also broke another rule of writing – when the first publisher he approached snapped up his book, The Master of Morholm, a historical saga set in the Fens. He said: "I was in my third year of university and I had been writing all through my teens. A friend read what I had been working on and said I should go for it. "Before then, I didn't think it was something I could ever do. I thought it was like being a pop star. I didn't think you could just become a novelist."
Tim has a contract for another two novels with publishers Headline, but this doesn't bring the trappings of fame.
He said: "It is my main job but it is not a high-earning profession – unless you're JK Rowling."
Tim lives in an unassuming house in Brookfurlong, Ravensthorpe, with his wife, Mary-Anne (38) and their two-year-old son Adam. Born and raised in the city, he has been writing for 20 years.
His latest book, Indiscretion, is inspired by the works of Jane Austen and is set in Regency England. Tim said: "One newspaper described it as an homage to Jane Austen and I suppose you could also call it a romantic comedy." He added: "Emma, by Jane Austen, is a book I could go back to again and again. I suppose that is the test of a really good book – if you never tire of it."
His most successful novel, Passion, followed the romantic poets, Byron, Shelley and Keats.
The book was critically acclaimed, with best-selling author Joanna Trollope describing it as "compellingly well written and stylish with it". Tim said: "Indiscretion is very different to Passion, it is pure fiction. Passion is my favourite, it was a labour of love."
Although Tim writes full-time he is also a tutor at the Peterborough College of Adult Education.
His forthcoming novel, Symphony, is based around the composer Hector Berlioz. It follows the life of Harriet Smithson, an Irish actress who became his muse for the Symphonie Fantastique". (Interview for Peterborough Today in 2006).
Posted by Ellie Foster at 12:32