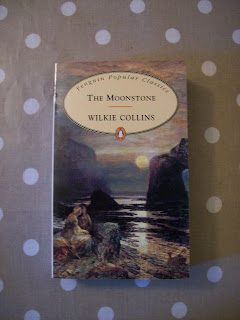 Here is the latest book (apart from Moonshine by Victoria Clayton) I have on my reading list. I was inspired to rush out and buy it this morning (from a charity shop) after hearing the first part of a new radio adaptation of it on Radio 4 yesterday. I love 'The Woman in White' by the same author so am expecting good things from this one - described as one of the first detective novels. Both the books seem to have the story narrated by several different characters which encourages the reader to put the various parts together to make the whole. Although this can be frustrating, it is also exciting and I can remember being so involved in The Woman in White that I found it hard to tear myself away and come back to the real world. I hope I have a similar experience with this one.
The story centres around a cursed diamond which has been stolen from a statue in India and has been given to a young lady on her 18th birthday. However, she has put it away and overnight, it has been stolen again. Enter Sergeant Cuff, who has the unenviable task of solving the mystery.
My eldest sister hates this book with a vengeance (I'm not quite sure why, unless it is to do with having to read it at school as an exam book) and I am taking this as an added incentive to read it. If it is like the radio dramatisation, it will be great!
The information below is from the Radio 4 iplayer site.
"Doug Lucie's dramatisation of Wilkie Collins' detective masterpiece from 1868, starring Eleanor Bron as Lady Verinder and Kenneth Cranham as Sergeant Cuff, Paul Rhys as Franklin Blake and narrated by Steve Hodson as Betteridge.
Described by T.S. Eliot as the first and best of English Detective novels, The Moonstone, involves a huge diamond stolen from the forehead of an Indian deity, plundered in a siege and finally given to Rachel Verinder on her eighteenth birthday. It is said to carry a curse and mysteriously disappears on the night of the celebrations.
Are the Indian jugglers who were at the house earlier to blame? Why are they hanging around the property with a little boy they appear to be able to hypnotise? When the local police get nowhere, one of the new detective police is called for from London, and quickly finds a clue, but what is it going to tell him? Has the curse of the Moonstone brought with it suspicion and superstition to poison the happy Verinder household on the Yorkshire coast?
Cast: Lady Verinder ..... Eleanor Bron Rachel Verinder ..... Jasmine Hyde Betteridge ..... Steve Hodson Franklin Blake ..... Paul Rhys Sergeant Cuff ..... Kenneth Cranham John Herncastle ..... Stephen Critchlow Rosanna Spearman ..... Alison Pettitt Godfrey Ablewhite ..... Mark Straker Penelope ..... Clare Corbett Mr Murthwaite ..... Paul Battacharjee Khan/Indian..... Narinder Samra Housemaid ..... Carolyn Pickles Boy ..... Alex Miller
Recorded on location by Lucinda Mason Brown Original Music by David Chilton Dramatised by Doug Lucie
Producer: Janet Whitaker A Goldhawk Essential production for BBC Radio 4."

If all this has whetted your appetite, the link to episode one on iplayer is below:
http://www.bbc.co.uk/iplayer/episode/b00xp2cs/Classic_Serial_The_Moonstone_Episode_1/
Enjoy!
Posted by Ellie Foster at 15:23