The Artist - What a film! 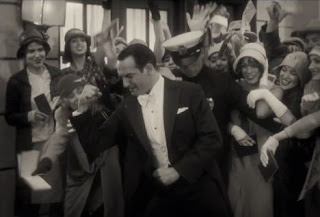 I had been wanting to see this film since I caught a tiny snippet of it on the BBC 'Culture Show' before Christmas.  As it was a 'niche' film, I didn't think it would be shown by the big cinema companies.  However, owing to the influence of winning a few Golden Globes recently, it seems to be getting a wider screening, and so it should.  I'll try not to be too gushing, but it was one of the best films I have seen in a long time.  It has elements of A Star is Born and Singin' in the Rain, is filmed in black and white, is almost silent all the way through, and is by turns funny, moving, poignant and thought provoking. 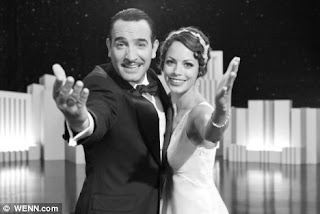 There is a really good review from the Guardian newspaper which says everything I want to and more, so here is the link:
http://www.guardian.co.uk/film/2011/dec/22/the-artist-film-review
It is an affectionate homage to silent films and the stars of the time and is a must if you enjoy film history. The acting is absolutely pitch perfect throughout with a great ensemble cast too.  I thought it was incredibly brave to make something this different and put it up against the blockbusters we are all used to now.  I hope the Golden Globe awards are the first of many.
As for a star rating - it HAS to be 5 out of 5!
(Photos from www.dailymail.co.uk)﻿
﻿
Posted by Ellie Foster at 21:38