Black Sheep: the darker side of felt - exhibition

This morning, Chris and I headed to the National Centre for Craft and Design in Sleaford, to see an exhibition devoted to 3D felt.  (Sleaford is rather an out of the way place for a National centre of anything and I do wonder why it was chosen.  The building itself is rather like Dr Who's Tardis, but in reverse - it looks much bigger on the outside!)
I asked whether I could take photos and was told I could, so, I wonder if you would like to join me at the exhibition?  You would? Excellent! 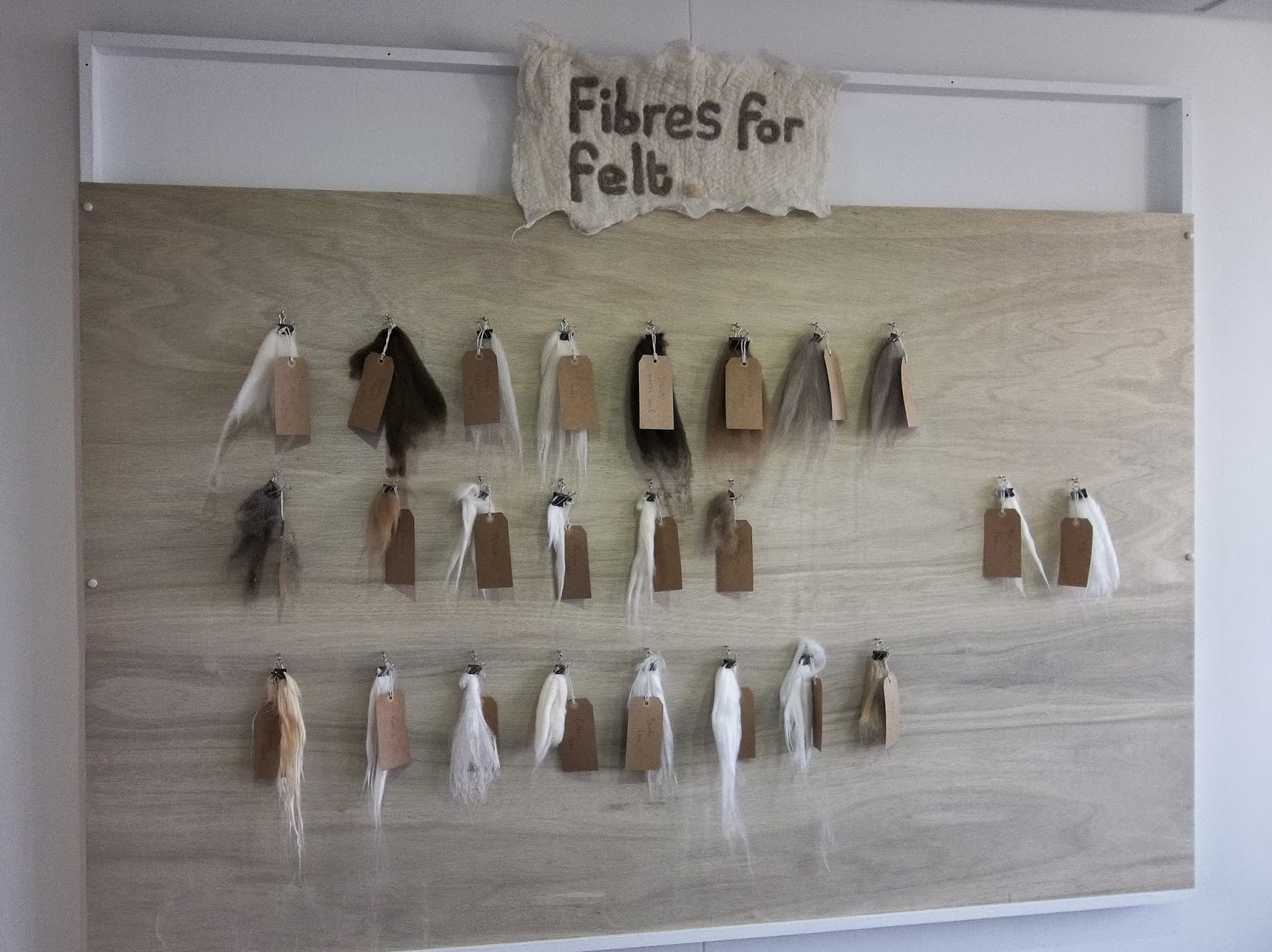 Before entering the gallery, there was a display of different fibres which can be used in felting from the obvious wool to alpaca and yak and moving on to plant fibres such as bamboo and corn fibre. 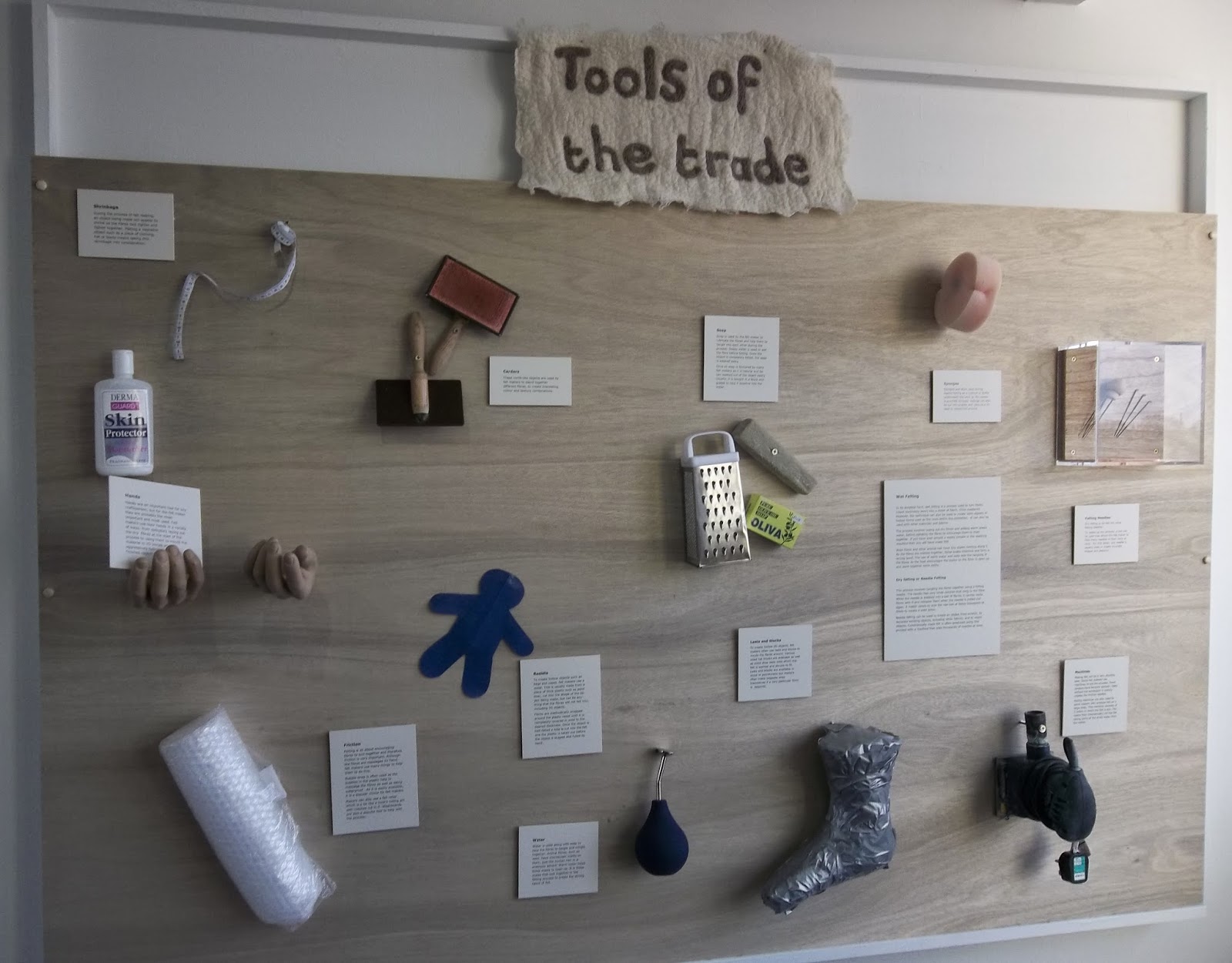 There was also a display of equipment needed for wet felting and needle felting too. 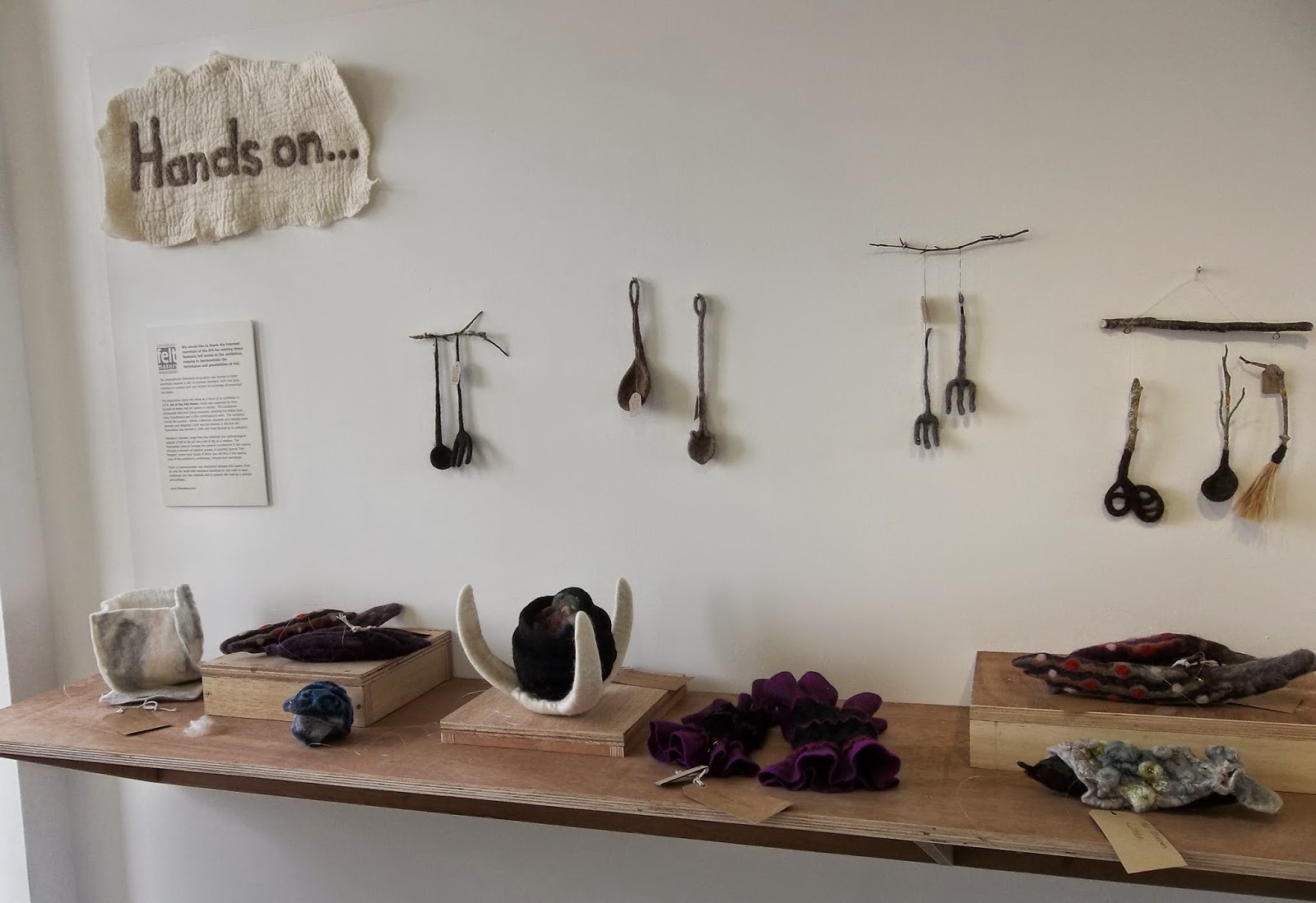 Opposite, there was an exhibition of small 3D pieces made by members of the International Feltmakers Association. 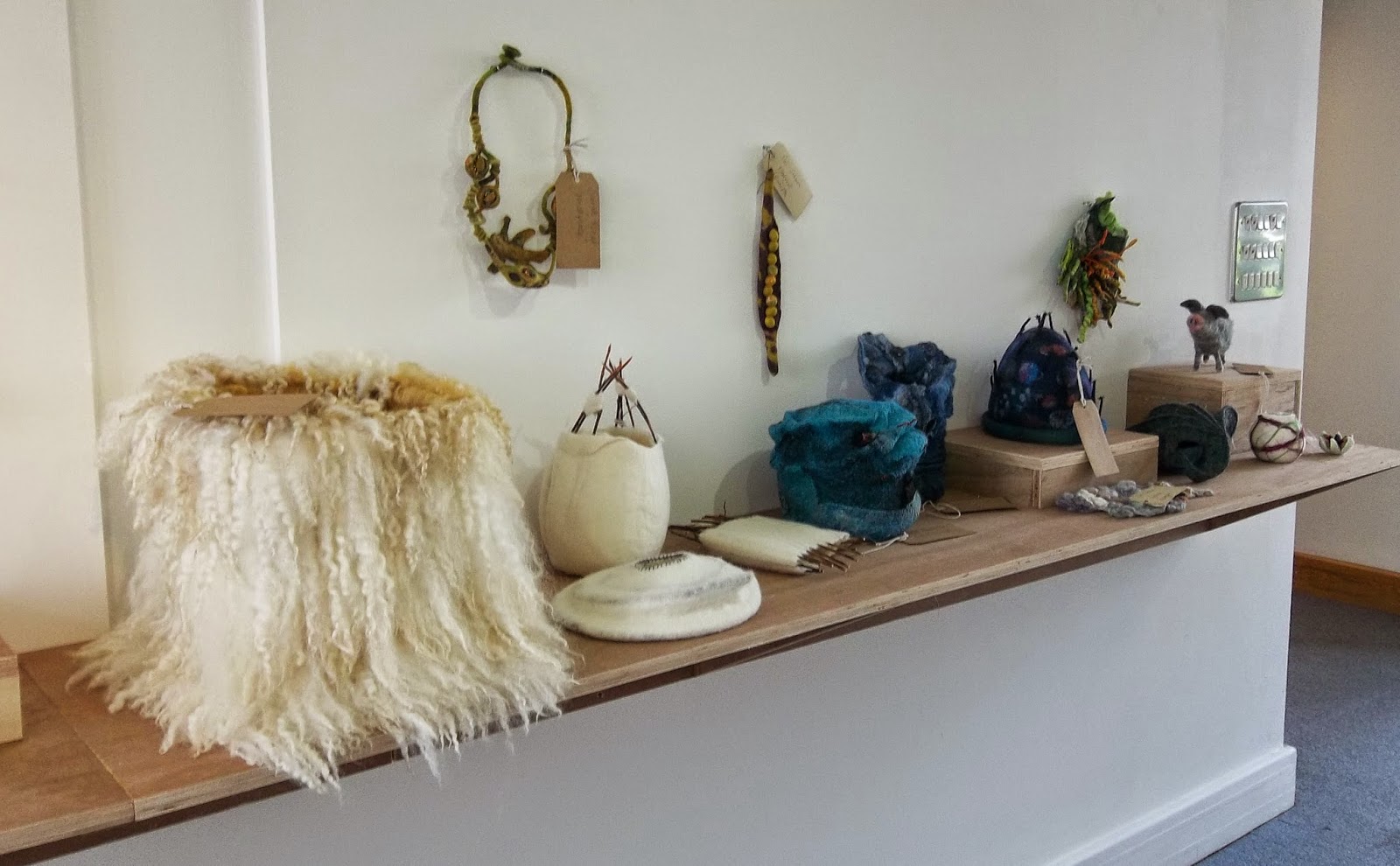 So, into the gallery (the title wasn't actually pink; for some reason this is the colour my camera thought it was.  Perhaps it was to do with the lighting?) 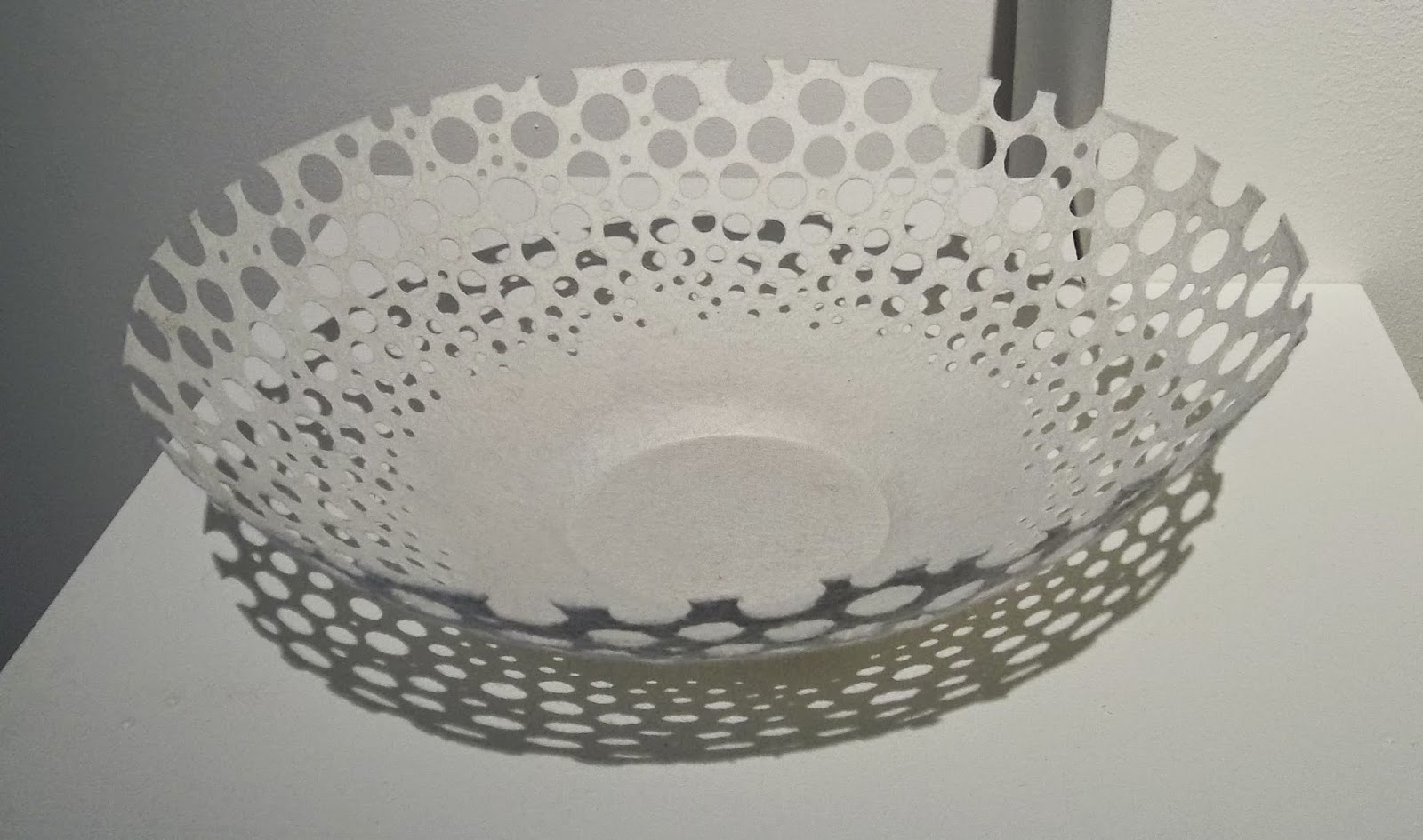 The first things we saw were these felted bowls by Gladys Paulus.  The felt was beautifully smooth and thick and it was difficult to believe these weren't ceramic, but were wool.

Two smaller ones made some interesting shadows. 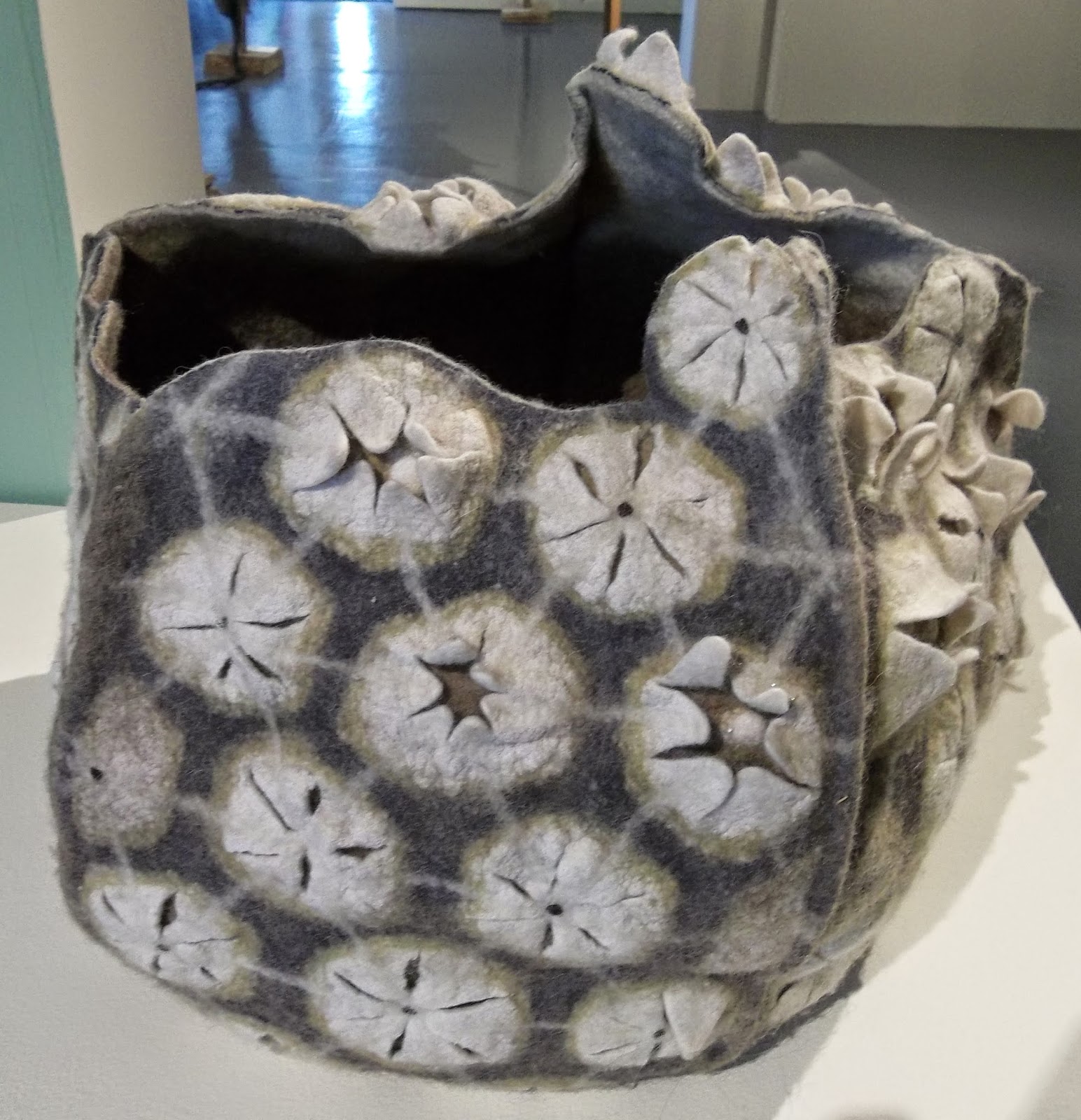 These pieces must have been inspired by sea creatures and had I read the information about the artist, no doubt I would have discovered more.  They are by Marjolein Dallinga. 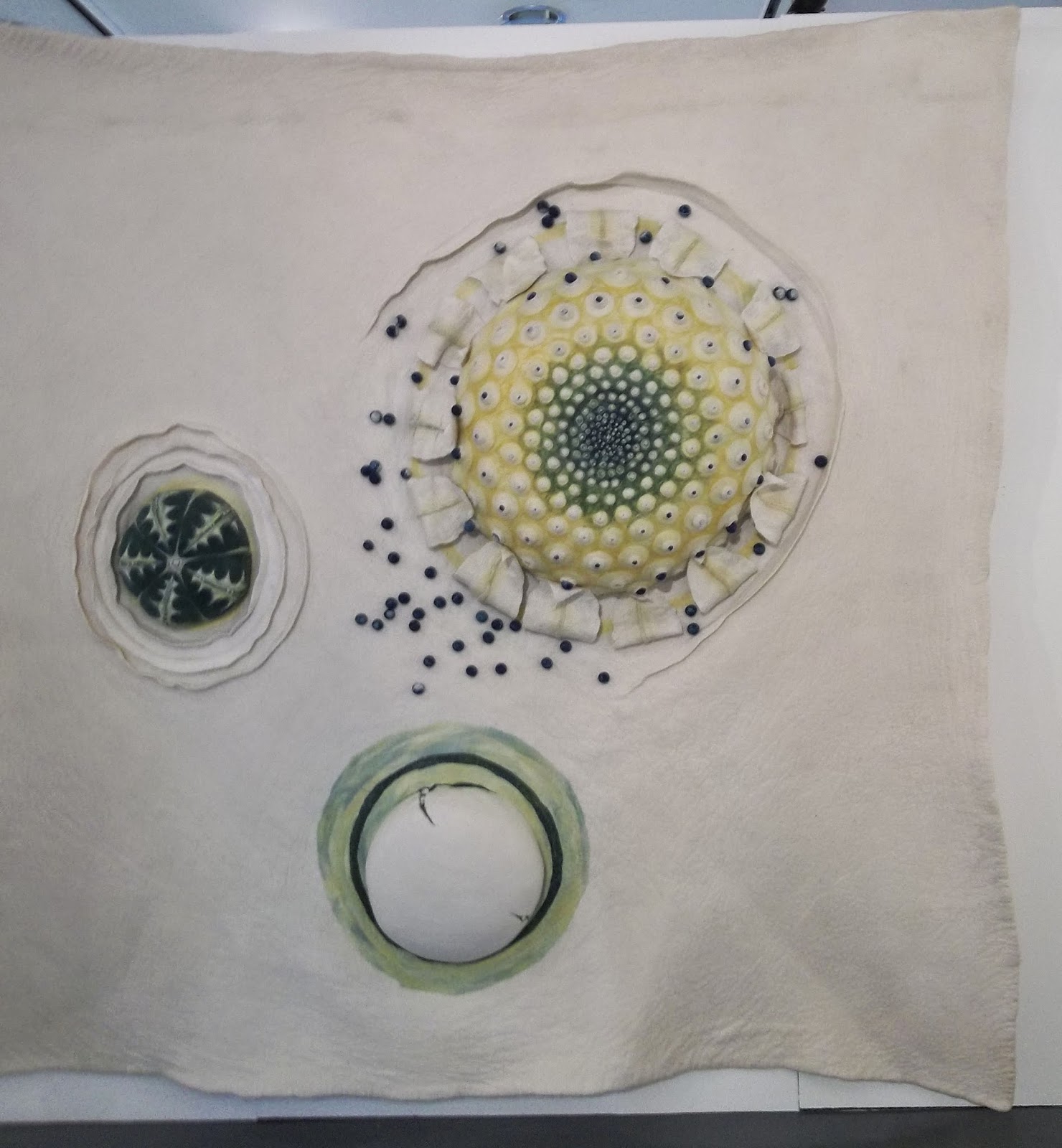 This piece took up the whole wall - hand dyed and hand felted. 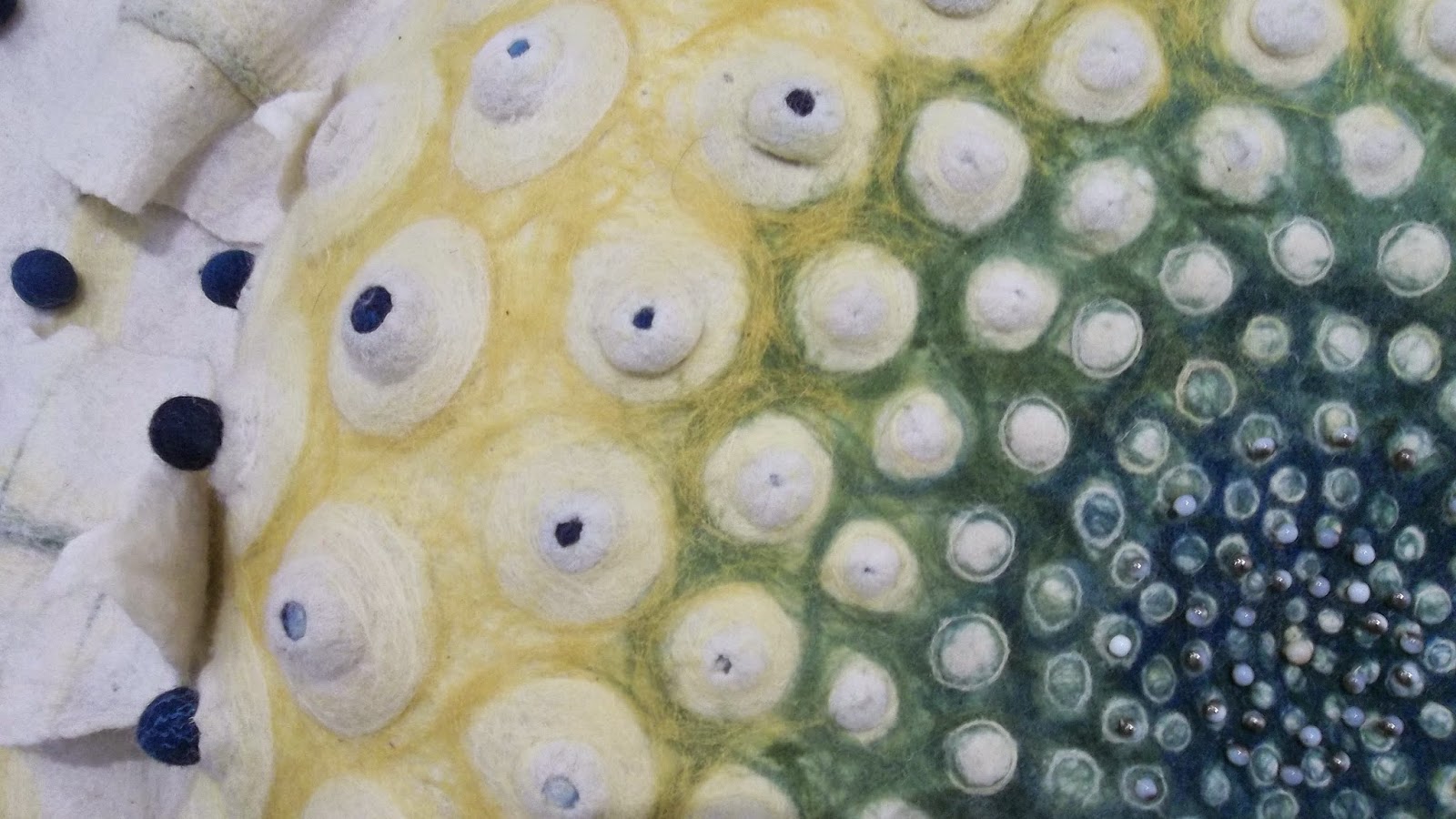 Here's a close up of the biggest sea urchin shape. 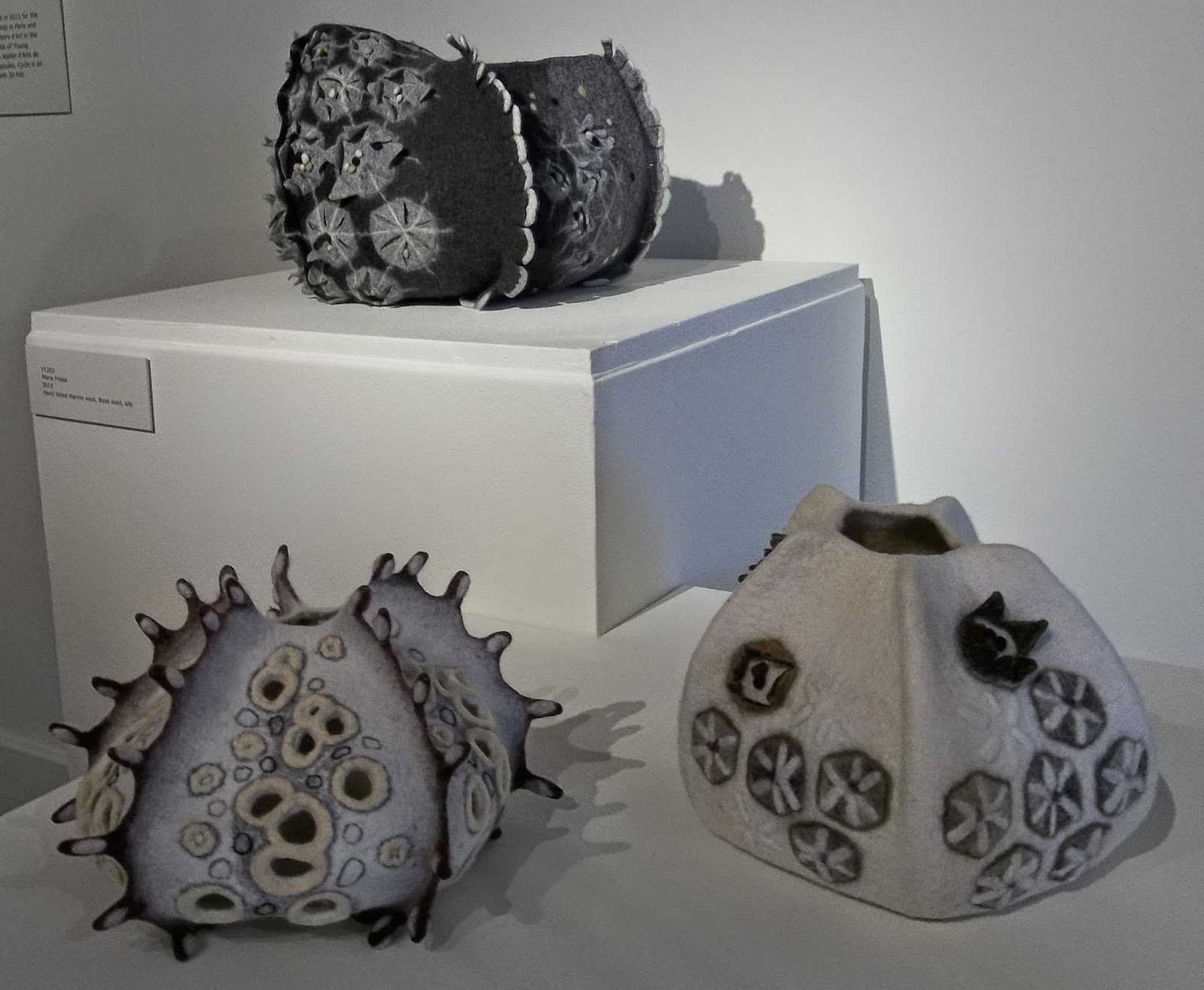 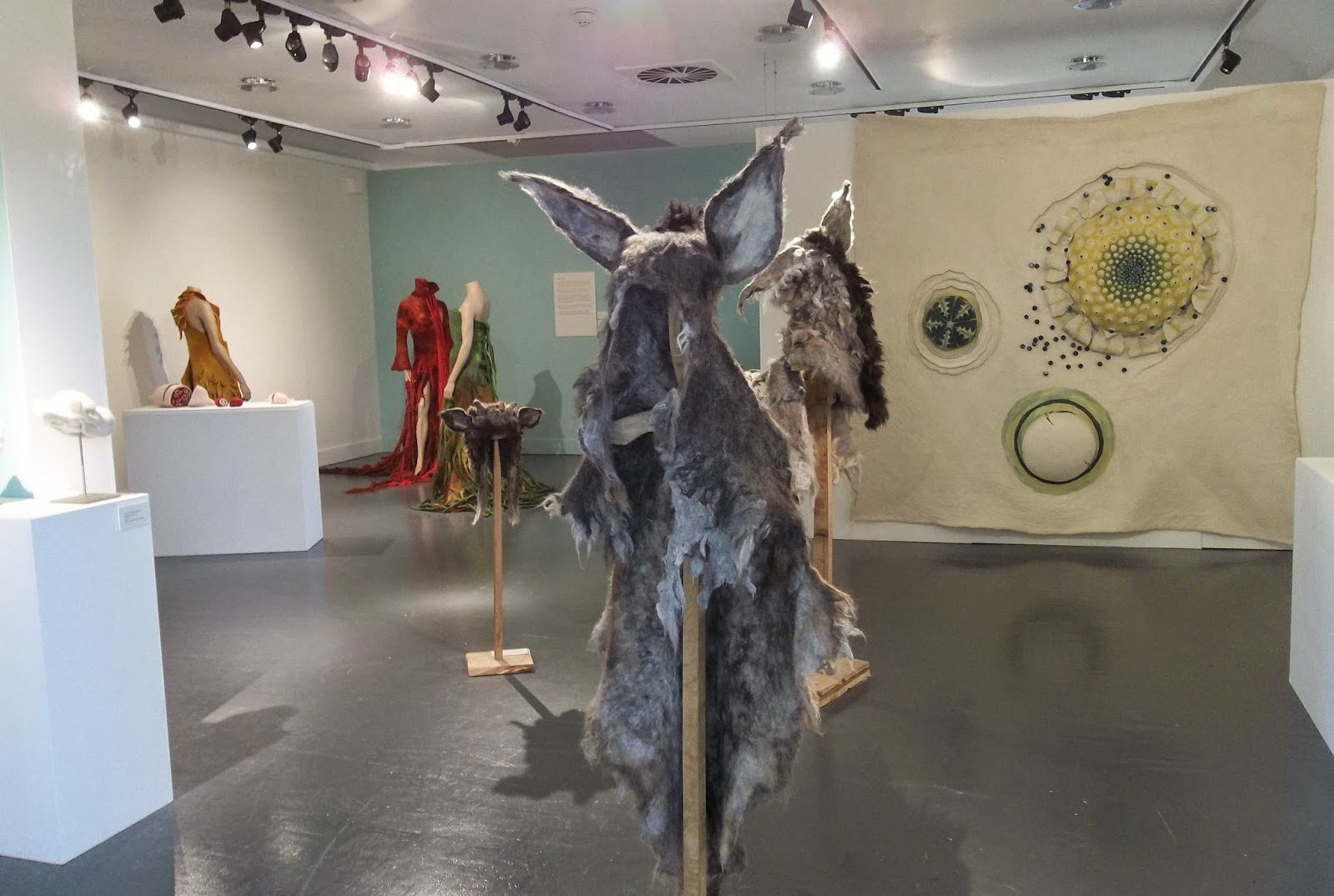 Here's a view of the gallery space.  The animal head pieces are by Barbara Keal and we both thought that they would be amazing theatrical costumes.  A Midsummer Night's Dream, anyone? 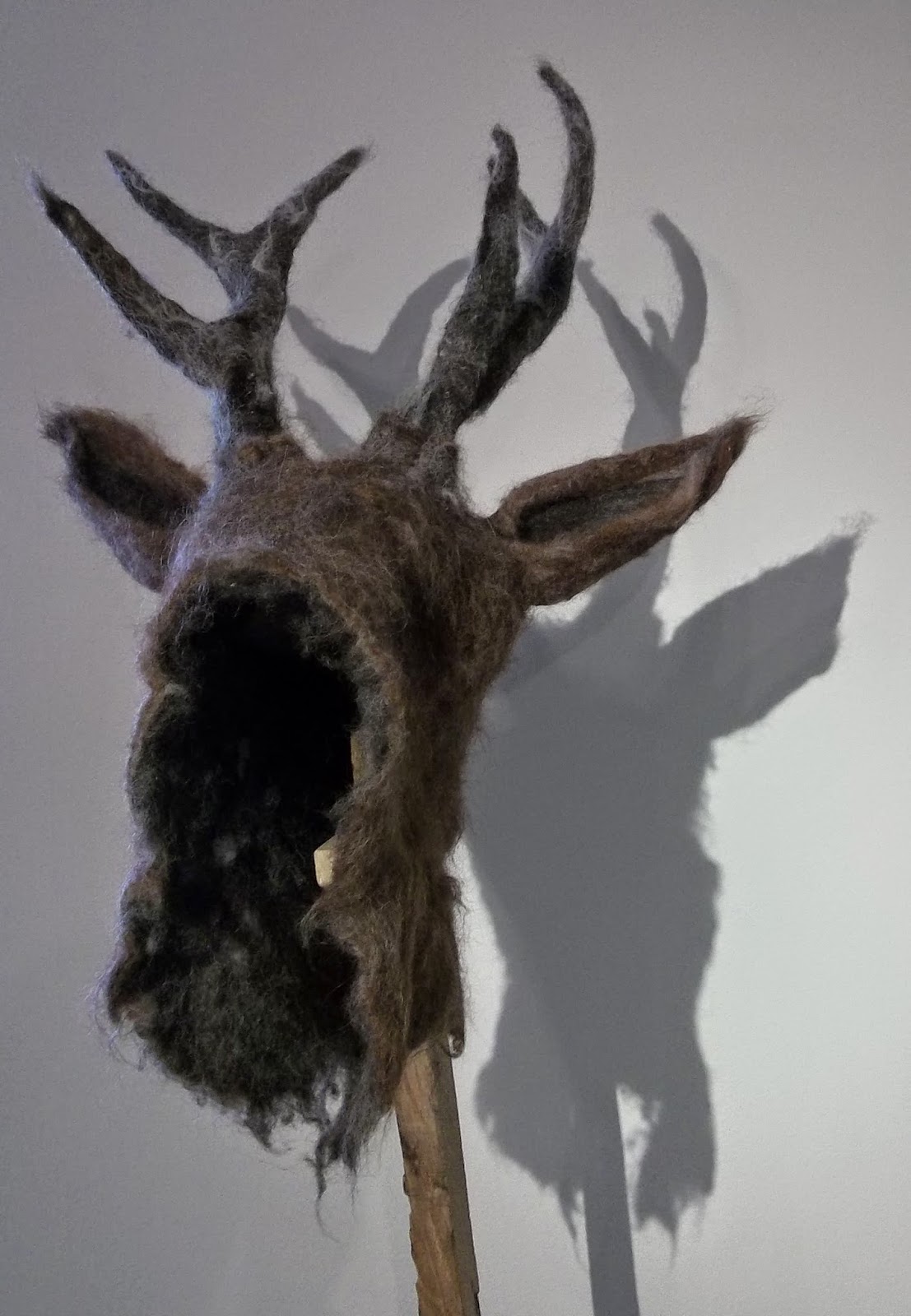 The shadow from this deer head piece fascinated me almost as much as the actual felt. 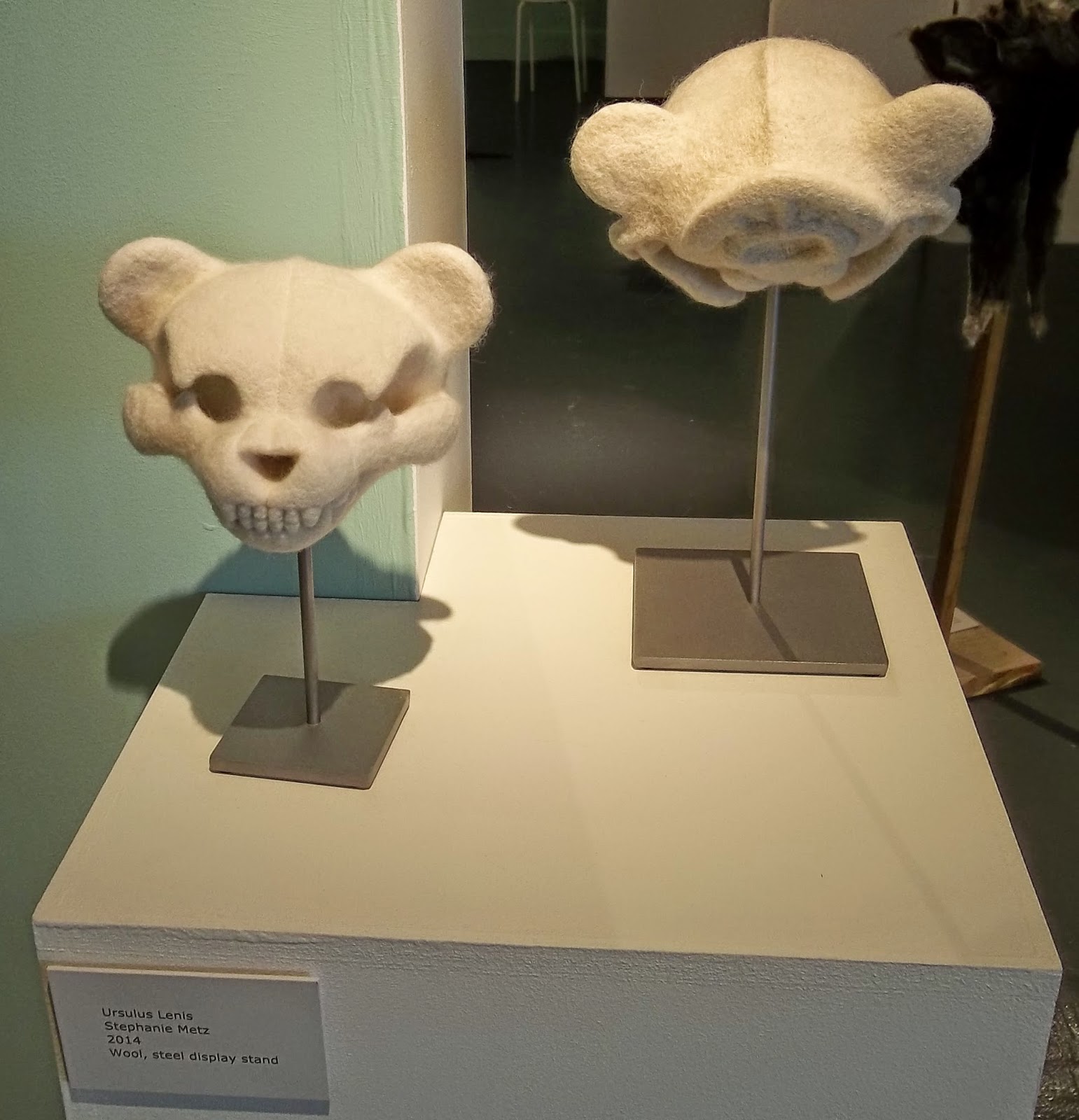 At first, I was amused by Stephanie Metz's Teddy Bear skulls.  There was another one in the foyer which visitors were allowed to touch and the felt was absolutely solid. Then I though they were slightly macabre, being skulls of teddy bears, which don't actually have skulls. Finally, I thought that the artist must have had to study the anatomy of bears as well as the anatomy of the particular teddies she chose to create; a lot of work had gone into their creation, so I was very impressed.  That was one thing I did think as I walked round - the amount of time and physical effort needed to create these pieces must have been phenomenal (I know how long it takes and how much effort is needed to make a small piece of 2D felt!). 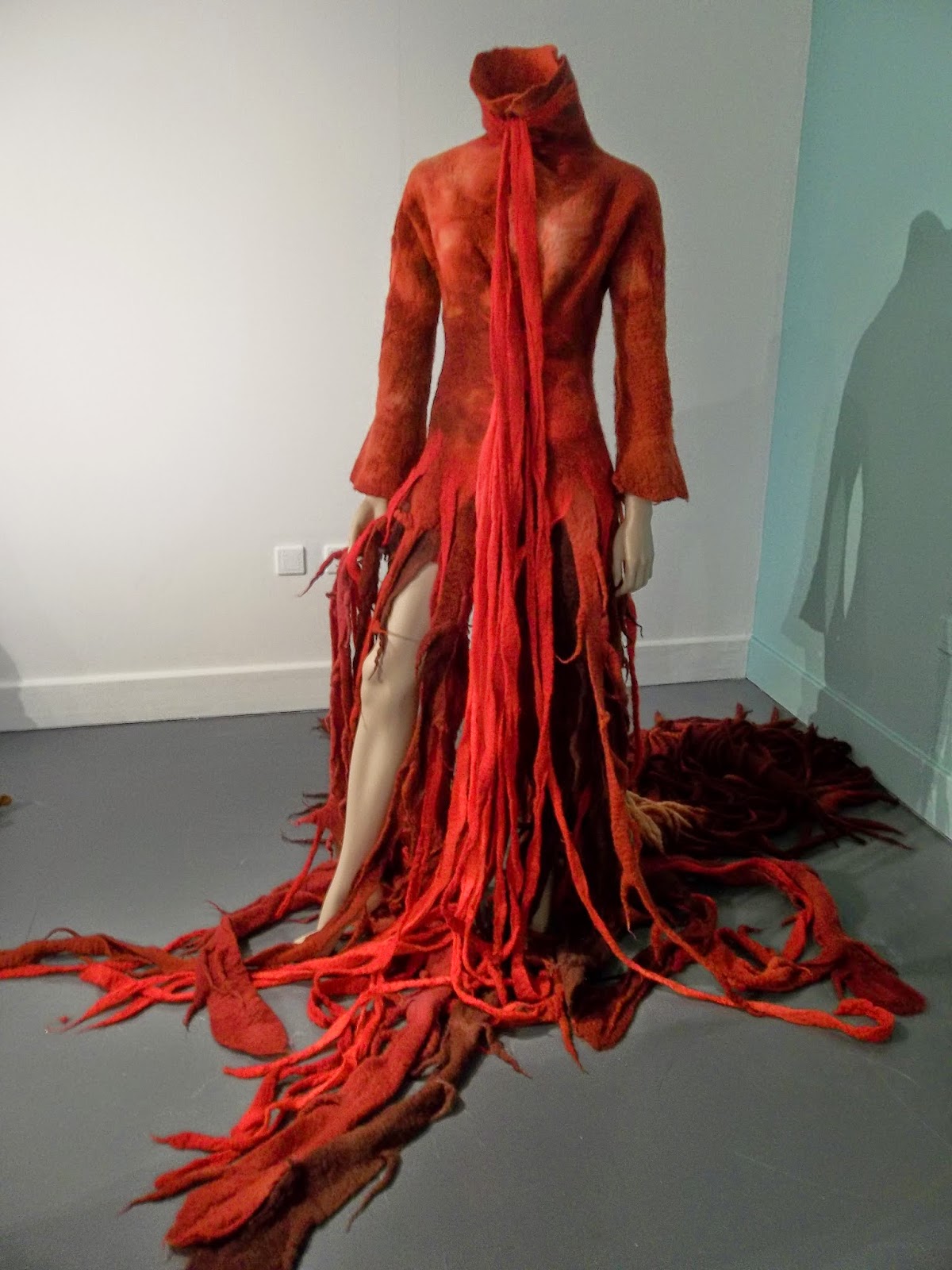 We loved these costumes by Horst Couture.  Again, they would really lend themselves to theatrical performances. The red one was particularly striking. 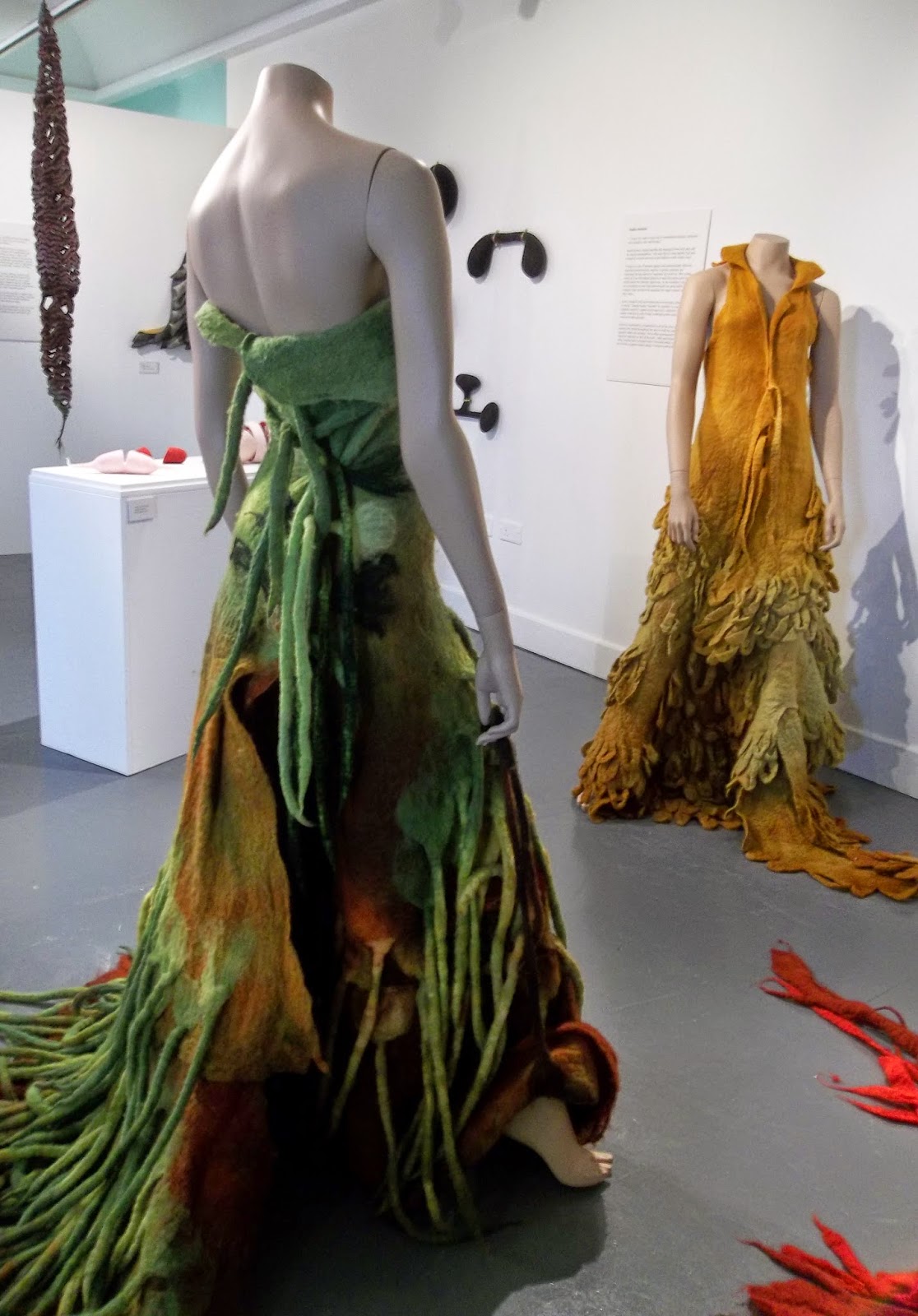 There was also a green one which reminded me of seaweed and a yellow one called 'Goldenrod'.  All in all, we thought it was definitely worth seeing the exhibition as the artists showed the infinite versatility and variety of 3D felted pieces.
I believe the exhibition may be moving to a number of UK venues, so if it is something that interests you, I would recommend a visit. There is a blog here although no other venues are mentioned when I looked today. There is information about all the artists and their work there too.
Posted by Ellie Foster at 17:52